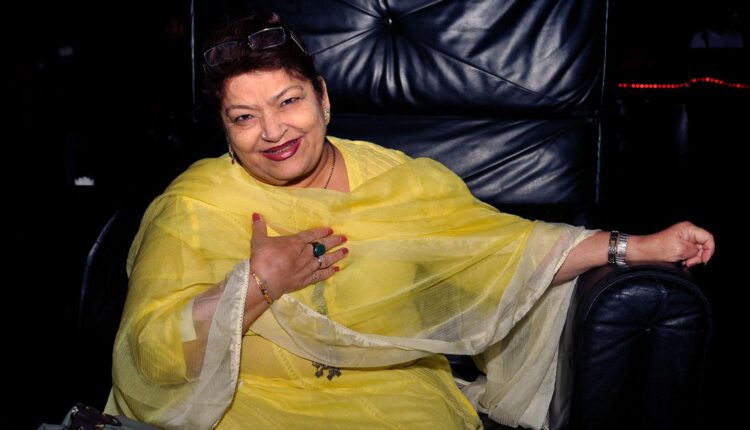 Ace choreographer, Saroj Khan passed away due to cardiac arrest in Mumbai on July 3rd. She was a part of several shows on the television screen as a judge like Nach Baliye, Jhalak Dikhhla Jaa, Nachle Ve With Saroj Khan and Ustaadon Ka Ustaad to name a few. She was a prominent Bollywood presonality and had left her own shimmering mark on the television industry too. She had influenced and inspired many in her life time.  Remembering her out TV actors paid a tribute to her and reminisced what they liked about her.

The Afsar Bitiya actress Mitaali Nag shares, “Saroj ji was not only a successful choreographer but also the perfect example of how one can look graceful while doing raunchy moves. She was the true dancing queen and leaves behind a great legacy”

Angoori Bhabhi, from Bhabiji Ghar Par Hain, who herself is a trained dancer says Saroj Khan was guruji for almost every star. “If not personally, virtually we all learned many dance steps from her songs. She was actually a story narrator, she added life to many songs. Such was her aura. She will always be remembered in the entertainment industry”.

Meghna Naidu who was also a part of the reality show Dancing Queen says, “We lost a legend. A woman who turned actors into stars. A lady who made songs iconic because of the videos and they way she choreographed nit. A master who taught most of our actresses about expressions. I’m sad that I never got a chance to work with her. But my first song Kaliyon Ka Chaman was directed by her son Raju Khan so in a way I had her blessing.”

Puru Chibber who is known for his roles in Naamkaran and Pavitra Rishta says, “I feel blessed to have known her. I met her and have seen how beautiful a soul she was. I still remember the time spent on the set of Saawariya along with her. She was legendary choreographer.”

Athar Siddiqui who is known for his role in Chandra Nandini, “I still remember the day when we surprisingly met Saroj Khan Ma’am during my debut reality show The Bachelorette India. Guruji was a smiling face yet very strict. I still remember she scolded me when she was choreopgraphing us for a performance in the show along with Mallika Sherawat. I was a non dancer then and today I don’t fear dancing. Her scolding turned into a blessing for me, such was aura of our dancing queen”.

Vighnaharta Ganesh actor Kuldeep Singh shares, “Saroj Khan was a legendary choreographer and she took our entertainment industry to a new era with her art. And when such a diva leaves us, it brings an end to the era. But I believe she will always be celebrated by her songs.”

Another actor Nishkarsh Kulshrestha adds, “Saroj ji added life to songs and they are still remembered as iconic dance numbers. Her originally choreographed songs couldn’t make success in their new versions. The dancing queen bought a new era in our entertainment industry.”