Scene 1
Samir says why are you not piking my phone. Why are you avoiding me Sanyu is dazed. He says I am asking you something. Why are you not picking my phone for day. What are you doing here ? Sanyu says I was doing a lab assignment.
he says I have saved you from our both parents’. You are ignoring me. sanyu says why would I ? I was guilty that I didn’t thank you. I was making a gift for you that’s why wasn’t picking your phone. He asks where is it ? Snayu says that’s a surprise. I can’t keep it with me. Its in my room. Go to visitors lounge I will come with your gift there. he says why don’t you say you wanna send me from here? Snayu says its the lab new dean is so strict. he says to hell with rules. I haven’t seen you for days. when did you face fix? He comes near sanyu pushes him away and says my hands are greasy. I am coming to visitors lounge with you gift. she goes out and says I have send randhir out of college. 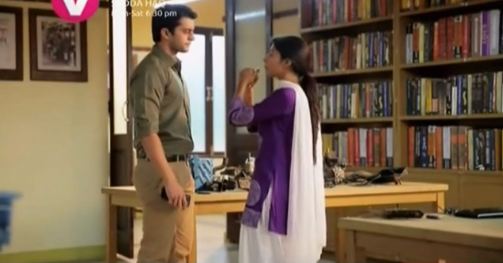 randhir and Samir are walking in parallel corridors but randhir turns in the end. randhir meets yoyo. He says I was waiting for Nikhil. Yo yo ask did you say sorry to sanyu ? Radnhir says yeah I feel better now. I am going to meet her. Yo yo sees Samir and says I have seen him.
Sanyu calls randhir and says go to your room I am going to my room as well. 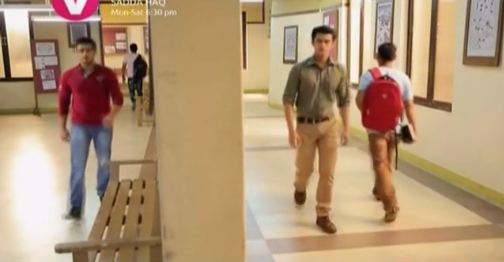 Sanyu calls kaustuki and tells her that Samir is in college. She has sent Samir to lounge and randhir to his room. She says vidushi will see him and will tell everyone. make sure she doesn’t see Samir and ask yo yo to keep randhir is his room.
Sanyu looks for a gift in his room. She takes out the stick they made and says sorry guys we made it for team but I have to use it for myself. Kaustuki calls yo yo and ask him to keep randhir in his room. He says don’t worry I wont let him. Why are you saying that ? kaustuki says vidushi is looking for him.

randhir is in his room. Yo yo comes there and says u need your help. He says please explain me this equation. Radnhir says hold the book right. Radnhir says when did you start studying ? Yo yo says since dada hit me hard. I have to be serious now. Randhir says dad or jaustuki ? He says tell me whats sin theta and ksaustuki theta I mean cos theta. Randhir asks him to sit and explains in. 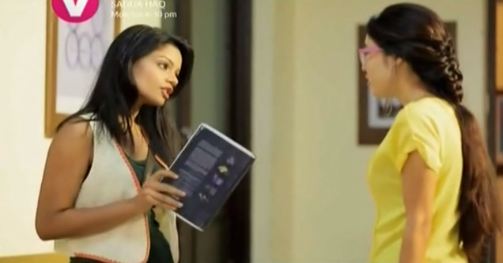 Kaustuki sits with vidushi in the class. Vidushi says why you wanna feel inferior by sitting with topper.

Sanyu goes to Samir. he says why are you so late ? snayu shows him the gift, its the stick they made. says I was finishing it. She gives him the walking stick and says it has a GPS I will sned it to your house when I complete it.
Samir says what is this ? You think I am blind. What are trying to prove ?
Sanyu says I thought you would need it for adventures. Samir says I have no interest in this engineering of yours. he throws away the stick.Go bring a sandwich my head hurts. Sanyu says okay stay here I will bring one.
Vidushi asks kaustuki why are you following me? kaustuki says will you help me in studies. Will you help me ? Vid says in heart I don’t know anything myself. She says where is your team and friends? didn’t they help you ? Kaustuki says I just realized I should be with you. lets go to the class 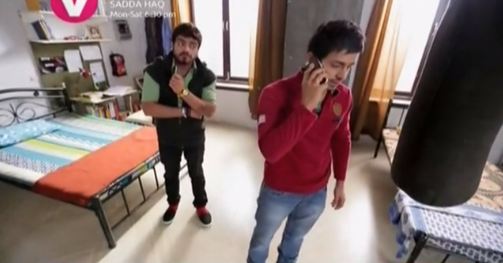 Yo yo is asking him stupid question. Randhir says you are doing the deliberately. He says no no. Randhir calls sanyu and says I have been waiting for you for so long and yo yo is teasing me in my room. Maya would kill us. I am coming o library to meet you. Sanyu says no no go to lab. She thinks at least lab and lounge are far.
Radnhir says there is name of author on back of the book call him and ask about the equation. he leaves. Yo yo says what will I say to kaustuki now.

Randhir comes to the lab. He says what are you doing ? She shows him the gift and says say the same line girls should do mechanical engineering The machine records it. SAnyu says it has 130 photos you will change if you says it 130 time. The picture change every time he says the same line. He watches all the photos. He says you have made this for me ? This is so good. eat this sandwich now I am sure you must not have eaten anything. He takes the sandwich and opens. Samir calls her. Randhir asks who is it ? SAnyu says its maa’s call. I will see you in the library. She leaves. Randhir continues to his gift. 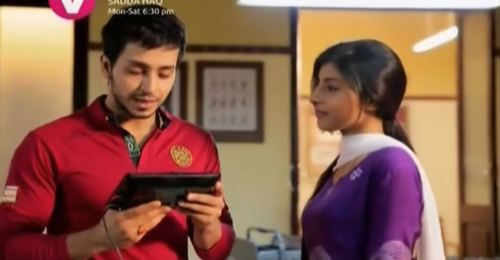 Sanyu goes to Samir.He says first you came late and now took this long to bring a sandwich. Give me the sandwich. He sees its half eaten. He says you brought one sandwich and ate half of it. Sanyu says I thought you would like it if we share it would be romantic.. He says it would have been romantic if I had eaten first and you second. He says it would be sharing if we were together. I am your husband to be you should eat my eaten no me, Go bring me a new one. Let me go with you. Snayu says no I won’t be late I will come. he says no I will come with you.
He says I saved you from your and my parents but you don’t care about me. I never heard I love you from you. I say I love you 10 times I call you. Are you listening ? I said you never said I love you. Say It today. Sanyu sees randhir coming. She says oh no. Sanyu says I was about to say on right time. She hugs him to hide her face and says I love you. Randhir stops and says why am I hearing sanyu’s voice ? 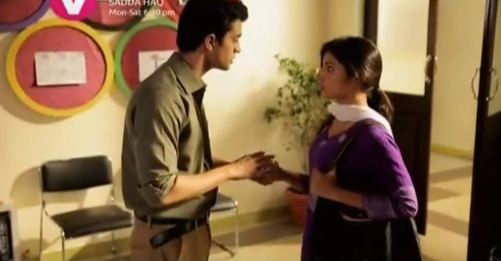 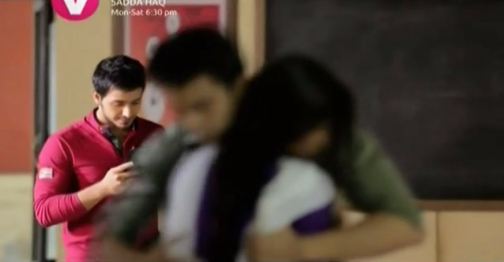 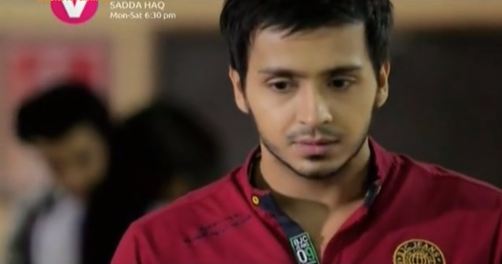 Precap-Randhir sees the video when sanyu says I love you. he says if everything stays fine I will answer this I love you tomorrow sanyu.
Randhir says to sanyu I wanna say you something. SAnyu says yeah go ahead. he says I.. 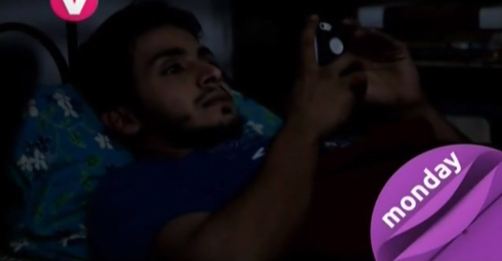