So let’s start
Then Riddhima applied Gulaal on Siya and Vansh’s cheeks and said Happy Dhuleti to them and then applied to rest of her family
Riddhima was continuously talking and enjoying with a girl . They did not paid heed to a pair of eyes who were staring them with curiosity .
They both wore : 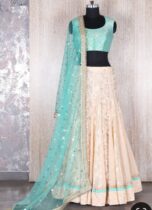 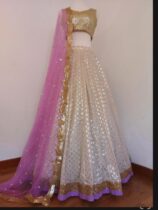 (These lehenga were worn by Riddhima and that girl )

( You all have guessed right . The pair of eyes were none other then of our VR )
Vansh gathered all members of RaiSinghania family at a corner and told the whole story of his and riddhimas’s meeting at entrance and her speaking Malayalam fluently .
Dadi : Vansh when I met her she directly clunged to Sakshi her chachi but not to her mother Sumitra first . First I had some doubt but after what you told my doubt increased .
Aryan : But Dadi then where was she these many days , why she was not with them when they shifted here a few days back ? Is she planning against us ?
( Good question Aryan koi to dhang ka sawal pucha )
Siya : No Aryan she was with her Dadaji in Gokul and Vrindavan for celebrating Holi and Dhuleti . That’s why she not met us.
Vansh : Why Riddhima is doing like this , I don’t know what to do , even I am confused that she is my Riddhima or not ?
Ishani : Bhai why are you worried about that girl . Just as how she trapped us the same way she trapped the those Sehgals .
Tch.. Tch.. Tch.. Bichare Sehgals kahi woh inko bhi dhoke deke bhaag na jaaye aur himmat to dekho uski usne aapko pehchanne se bhi mana kar diya

Angre : Ishani just zip up your this blo*dy mouth and words
Ishani was about to speak something but Vansh gave her deathly and angry glare and signalled her with his fingers about not to speak anything
Siya : Bhai I think either she is doing the same thing which you did with her or she lost her memory or she is not my Riddhima bhabhi or she is taking revenge from all of us
All agreed to Siya and thought about it in their mind and just then Chanchal Chachi’s sight came on Riddhima and that girl with her
She said : Does anyone know that girl who is talking and laughing with Riddhima this much just as they are ‘ MELE KI SAALON PURANI BICHDI HUI BEHENE ‘ and I didn’t saw her yesterday also
Aryan : Ya I can also see that from when she continuously talking and laughing with Riddhima
Siya : Don’t worry let me go and check who is she and also I have to start making bond with her as a best friend I hope atleast she could trust me the way ( Eyeing Vansh ) someone should have trust her . And instead of me someone else could have tried to talk with her right now but seems he is not interested just doing drama of loving her in front of us
Vansh was about to speak something but Siya left from there
Ridhhima and that girl were so much involved in their talks that they didn’t noticed Siya’s arrival
Siya : Hi Riddhima di
Riddhima : Hello Siya meet my sister Bela
Siya : Sister ? Aum um I mean if she is your sister then why she is not staying in Sehgal Mansion ? Sorry to ask I know it’s personal but I was so much curios so
Bela : Riyaaa ! Hi Siya I am Bela Sharma Riya’s childhood bestie-cum-sista so she calls me her sister
Siya : Oh Ok
Suddenly Bela’s phone rang and
She said : Riya you’re Gujarati fan’s call came
Riddhima : Bela ( glaring her ) give it to me
Bela hand overs the phone to Riddhima
Riddhima : Hi Parita tu kem che majama ne ? Uncle ane Aunty keva che ?
(Riddhima : Hi parita . How are you , hope fine ? How are uncle and going ? )
Riddhima : Hu to thik che ane ghare pan badha thik che
(Riddhima : I am fine and all my family members are also going good. )
Riddhima : Ha e vaat sachi che pan…
( Riddhima : Ya that is true , but… )
And Riddhima was talking with her friend

Siya : Umm I am going we will meet later actually I wanted to talk to Riddhima di but she is busy in talking and Dadi is also calling me so
Bela : It’s ok Siya , I can totally understand you can go I will tell to Riya and ya nice to meet you
Siya left from there and came to her family and told them about Bela
Aryan : Oh ok . Uhm Siya is she single ?

Siya : Aryan if you want to date her then directly go meet her and talk to her I am not your ‘ Khabri or Messenger ‘ OK
Siya : And ya bhai what Siddharth said was true Riddhima bhabhi is knowing many languages right now she was talking with one girl named Parita in Gujarati
Chanchal : Wow Siya iska matlab hai ki uss Ridhhima ko kam se kam char languages to aati hi hai baki ki to languages ka kya pata waise tum na usse ye saari languages sikh lena phir mujhe batana mein apni Kitty Party mein apne sabhi friends ke samne bolungi Malayalam aur Gujarati mein haan .
Vansh : Ok thank you Siya agar tumhe koi aur information mile Riddhima ke baare mein to mujhe batana aur
He was about to say something but saw Siddharth
So he said : Ya Siya you were true this party is good I liked it
Siddharth : Thank God Vansh you liked it but why you were not present in Holika Dahan ?
Vansh : I was not feeling so well so I not came their earlier but when I came there you all were departed to your Mansion so . By the way don’t you think the party seems boring .
Siddharth : Oh Vansh tumne mere muh ki baat chin lee . I came here to invite you all to the dance floor
All agreed to him and Riddhima and Bela and all Sehgals joined them for dance

Then Siddharth announced : Hi guys now there will be couple dance so in first song you all will choose your partner and then when the song changes change of partner will also take place so let’s get started !
And ya the changing of partners will take place in the following way and here are the rules and regulations :

and ya get ready to see the possessive sehgal brothers

FLAMES – AN INTRODUCTION OF CHARACTERS