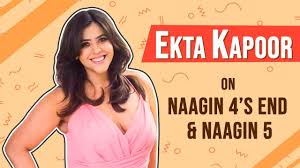 Naagin 5, a show that everyone is eagerly waiting for. While the Naagin 4 has not ended yet, the buzz around Naagin 5 is top-notch. Ever since TV Czarina Ekta Kapoor announced that she is soon going to bring a brand new and fresh season of her supernatural drama Naagin, viewers are getting curious to know more about the show. From the cast to the storyline to the lead actors, fans of the supernatural thriller are intrigued to know every little detail of Naagin 5.

While the makers of the show have not revealed any specific detail, they have started preparing for Naagin 5 in full swing. From deciding the actors to writing the script, Naagin 5 preparations are being carried on enthusiastically by its creative team. Just yesterday (June 11, 2020), Ekta gave a glimpse of her virtual (via video call) meetings with the Naagin 5 creative team, and it is filled with surprises for the show’s fans. In the video, Ekta reveals that she will be shooting for Naagin 5 promo very soon, however, she has a hurdle.

Worry not, the TV Czarina said that she is prepped up shoot an interesting promo of Naagin 5 at the earliest, but she is not aware of who the ‘real Naagin’ is this time. Yes, Ekta revealed that she is clueless about who the real ‘Naagin’ is as her team is refusing to give her the details. However, she did drop hints that the fifth season of Naagin will have two serpents.

So, Ive been doing Zoom meetings with the team, but they’re not even telling Me who is ‘Naagin’ in ‘Naagin 5’ …from what I know, there are 2… can someone help me pls!! 🐍 👀 My creative producers and writers are keeping me out of it …Maybe @colorstv can tell me !! #Naagin @balajitelefilmslimited

Though the makers of Naagin 5 are not yet ready to reveal the name of the new ‘Naagin’s’, we  have some goofy information for you. From what we (TU) know and have heard, Surbhi Chandna and Asha Negi are most likely to do it. Yes, there are high chances that Ishqbaaaz fame Surbhi Chandna and Pavitra Rishta fame Asha Negi will play the female leads in Naagin 5. Meanwhile, it is also reported that Kundali Bhagya actor Dheeraj Dhoopar and Hina Khan may have a cameo in Naagin 5. But still makers have not confirmed yet

What are your thoughts on the same? Who do you think will be the Naagin of the supernatural drama this season? Let us know in the comment section below.

Charu Asopa reveals that Rajeev Sen has moved out; Is their marriage is on the rocks?