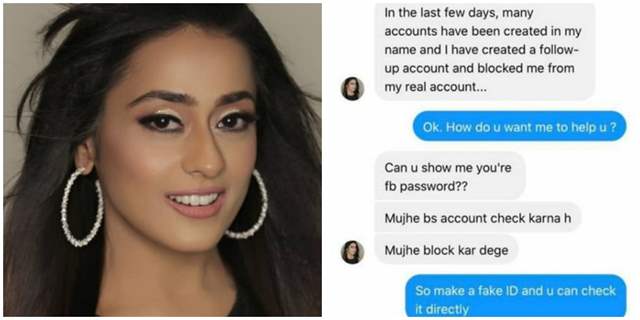 Kirtida Mistry is a very well known face in the telly industry. She has been enthralling her fans with her brilliant acting skills over the years. The Actress recently took it to her Instagram account  to let everyone know that there is a user who is regularly making fake accounts in her name. In the post, the Actress shared that the person has been harassing her from past 6-7 months.

A leading entertainmentgot in touch with her and said,” This person made a fake profile on Instagram firstly and then I reported that profile and that was taken down from Instagram. Now, he has made a fake profile on Facebook. This is happening from last 6-7 months. So, I think people should use their own identity to become famous. This is becoming a trend these days where people are using someone else’s identity to grab attention.”

She further added, “This is not just me, I’ve seen this happening with my friends as well. They just ignore it but I think it’s high time, we should take a stand and stop this.”

Kirtida has already sent a mail regarding the incident and will soon be filing a complaint. The Actress also asked people to be more aware and said, “People should be more aware and if someone is making a profile and messaging then it’s not that person always. There are lot of people making these fake profiles. So I think it’s better to just not respond and be more aware.”