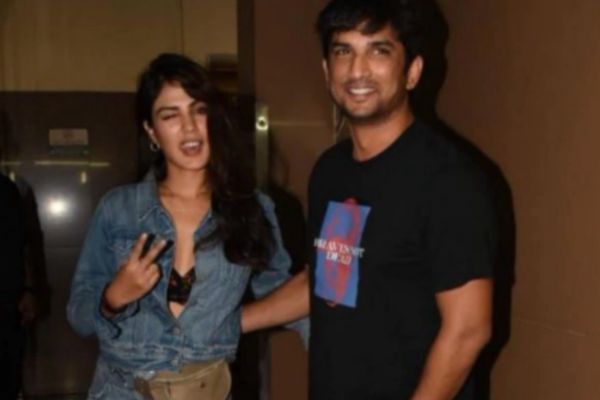 Sushant Singh Rajput left for heavenly abode on June 14, 2020 and his fans are having the hardest time believing that he committed suicide. Now all angles to his death are being probed in and slowly all the revelations are being made. Since his untimely death, investigations as to what made his take this drastic step have been on and now when a lot of loopholes and discrepancies were found in the investigations of Mumbai Police, the Bihar government appealed to the Central Government to allow CBI (Central Bureau of Investigation) inquiry into SSR’s case.

Now, Sushant Singh Rajput’s family lawyer, Vikas Singh has made some explosive revelations about how Rhea Chakraborty manipulated him and tried to break his bonds with his sisters and once accused Sushant’s sister Priyanka Singh of molesting her.

Excerpts from his interview:

Where and When did Sushant and Rhea first meet?

Narrating the incident from the day Sushant and Rhea first met, the lawyer told Pinkvilla,

Rhea Chakraborty and Sushant Singh Rajput met for the first time on April 14, 2019 at a common friend’s party. When she came over to his place on 15th April when Sushant’s sister Priyanka Singh and her husband were already there at his Bandra residence and were planning to leave for Pawna farm house. Rhea met all of them and she also went along with them to Pawna farm house and decided to stay over that night.Next day, in the afternoon, Sushant dropped her in Mumbai and came back to Pawna farmhouse in evening. On April 18-19th intervening night she insisted on coming to Sushant’s house at Capri Heights and reached at around 1 am and insisted on having drinks and also got everyone else to join in. They all stayed up till late in the night before they retired to their rooms. Rhea spent the night in Sushant’s room.

On 19th Priyanka and her husband had to leave for Delhi but Sushant requested Priyanka to stay back for a few more days saying that he would also accompany her to Delhi. So Priyanka’s flight ticket was cancelled at the last moment while her husband left for Delhi. On 19th evening itself Sushant wrote a beautiful emotional letter for Priyanka when Rhea was also present there.Next day, i.e. on April 20, 2019, Rhea invited Sushant and Priyanka on her brother Showick Chakraborty’s birthday party. Since it was already 10-12 in the night and both Priyanka and Sushant were tired. Sushant said he would rather go off to sleep then Rhea insisted Priyanka that she should come and herself did Priyanka’s make up for the event. Rhea insisted Priyanka that she should create a Whatsapp group which had the four of them as members. When they reached the venue Priyanka wished her brother but he stated that it’s not his birthday that day but they are celebrating on that night and they partied together.Priyanka realised that Rhea used Sushant’s credit cards to pay for the party in the end. From the party Rhea also came back to Sushant’s house while Priyanka went to sleep, Sushant and Rhea were talking.

When Rhea accused Sushant’s sister of molesting her:

The next morning i.e 21st April 2019 by the time Priyanka woke up, Rhea wasn’t there and Sushant was extremely angry. Rhea told Sushant the earlier night, after the birthday party, that his sister Priyanka tried to take advantage of her and molest her on the intervening night of 18-19th April at Sushant’s residence, Sushant believed Rhea and had an altercation with his sister Priyanka and Priyanka couldn’t even believe that Sushant would get manipulated this way but she wanted peace and vacated the apartment.Once she reached Delhi and told her husband about it, her husband told her that what happened was not correct as he was also there on the intervening night of 18-19th April 2019 and reasoned it out with Sushant directly through WhatsApp messages but Sushant wasn’t ready to listen.

Sushant realized his mistake and understood that Rhea was playing mind games with him and trying to manipulate him and break his ties with his family.

Singh concluded the incident saying, “Sushant was the closest to his sister Priyanka and in one day, their relationship suffered a deep crack. Post that incident, they didn’t talk for months, till November 2019 when Sushant called Priyanka and said sorry in a broken tone and asked her to visit him asap, that was the time when he also gave an SOS to his eldest sister Ranidi.

Next day, all the three sisters reached Mumbai to bring him to Chandigarh. It was then that Sushant asked Rhea why she accused her sister and why she insisted on taking Priyanka to her brother’s birthday party if Priyanka allegedly misbehaved with her and why did not she disclose about the said alleged incident for 2 days i.e from 18th night till 21st April.

Then, Sushant realised his mistake and after saying sorry, he settled the issue with Priyanka. He realised his mistake that in a short span of few days, Rhea had played a mind game to separate two siblings who were inseparable and happened to be each other’s strongest emotional support.”

Rhea Wanted to Put Sushant in a Mental Hospital; Call Records Contradict her Past Statements