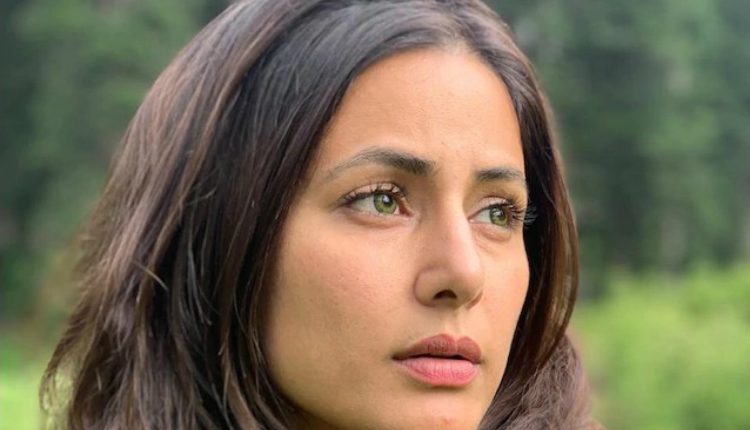 REVEALED!! Here’s the First look of Hina Khan from the Indo-Hollywood movie ‘Country of Blind’

Hina Khan is a busy bee these days. After her popular stint in Ekta Kapoor’s Kasautii Zindagii Kay 2, the doors of work have suddenly swung open for her. She walked the red carpet of Cannes for the very first time, debuted in International cinema. She made her way to Bollywood too and is already doing her second project with the famous director Vikram Bhatt.

Her Indo-Hollywood project, which she announced from Cannes itself, is based on the famous novel The Country of the Blind. It is making it officially her first international project. The film titled Country of Blind, based on the very popular book by H.G.Wells, is directed by Rahat Kazmi and has been shot in the picturesque locals of Himalayas.

She is essaying the role of a girl who is blind in the story. The movie’s story line is about the inhabitants of the valley who are all blind and have a way of making life work. Hollywood producer Cory Tucek has come on board ensuring that the film will have a US release before it is released globally.

Meet “Gosha” My first Indo-Hollywood project, Directed by our very own and talented @rahatkazmi #CountryOfBlind

A little birdie informed the news sources,“While Hina is the main female protagonist in the film, actor Shoib Nikash Shah has been cast opposite her while Inaamul Haq, Airlift and Filmistaan fame, will be seen as the main antagonist. The look of each of the actors will be extremely interesting as they will be seen wearing unique hand made costumes.”

Hina too is elated about her work and told a leading entertainment tabloid,“This project is very close to my heart because whatever we did in this film has been a new benchmark and there were no examples of any kind as a reference.. everything in this film is one of kind and we hope people will love it..”

Well, here’s wishing Hina all the success in all her endeavors. The film is produced by Rahat Kazmi Films and Tariq Khan Productions, Co-Production of Hiro’s Faar Better Films & Turn Key Films (USA)

Salman Khan’s Bigg Bos 13 will have a female voice instructor too?