The leading channels of the small screen … Star Plus, Zee Tv and Colors have come up with best of the Dance shows. While Zee has its famous Dance India Dance(DID) which makes everyone dance to the historic unique steps of the new talent, Colors has recently started Jhalak Reloaded on weekend slots. Star Plus has its Nach Baliye season 7 going on and presenting another dance show Dance Plus with Remo D’souza being his highlight. 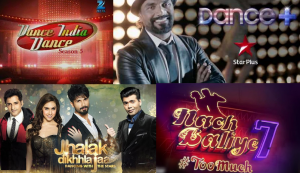 Nach Baliye 7 has come up with a different concept of bringing Daily Punchnama and showing the couple’s compatibility alongside dance. They got new judges this time and the show is pretty loved by all. Jhalak Reloaded started with Shahid Kapoor, Lauren Gottlieb and Ganesh Hegde being an addition to the judge’s panel with just Karan Johar being the judge from last season. Shahid’s entry in JDJ has made it even more rocking. He has raised the standard of JDJ 8.

Coming to DID Season 5, Mithun is still part of the show and upcoming episode will be featuring Salman Khan on DID stage, shaking a leg with the participants. DID has been best dance platform to introduce real talent from across India and other countries. The winners of DID has become successful choreographers now and making celebrity dance along in Nach Baliye and JDJ. DID has always maintained a good concept and stability in raising his standard. Dance Plus is an addition to the hit dance shows. Remo will be looking after a unique dance factor to give a plus to the participants. Dance Plus will be airing soon on Star Plus with promos being out already. Which dance reality show you prefer to watch? Let us know in this poll.