Pratap gives his sword to DB to kill him right away if she doubts his intentions too. I will be more than happy to die by your hands rather than doubting you. If you doubt my words a little then please go ahead. DB eyes Ajabde and VB pointedly as she holds the sword in her hand. She even takes the sword closer to Pratap’s neck while Maan, VB and Ajabde look at her in shock. DB and Ajabde eye each other all this while. DB makes Pratap get up. Your place is not in my feet but in my heart. If I doubt on your love then I will lose my faith from all the relations and even from myself. She gives his sword back to him. Ajabde says this is what I missed in Bijolia. These examples of sacrifice and love can be seen only in Chittor’s palace. I am thankful to God for making me a part of such a great family. She hugs DB. Don’t you think we should tell everything to Rana ji? Pratap denies. we should keep him away from all these tensions. He has a bigger worry – Mughals!

Bairam Khan gets happy seeing Akbar. He tries to talk to Akbar regarding his Gwalior victory but Akbar walks off from there without saying anything to him. Bairam Khan notices Mahamanga. She too looks at him but then leaves from there quietly.

Ajabde is decorating her bed with flowers for their first night. She is all blushing as she thinks of her past meetings with Pratap. She looks at herself sweetly as she gets ready. 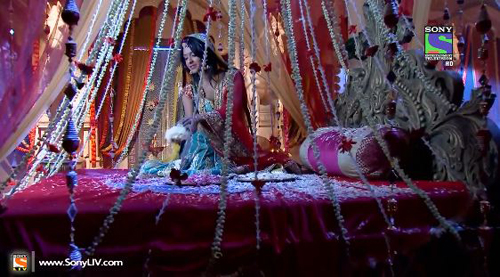 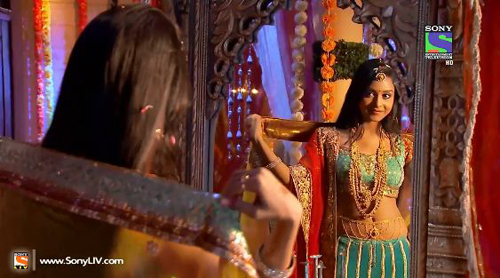 DB serves food to Rana ji. CK asks for her Dada bhai. Maan says he will eat later. CK always eats after him so Maan teases her that she will have to stay hungry tonight then. CK denies (a little loudly) while DB and US look at them. Maan explains to CK that AJabde bhabhi is here. CK wonders if Dada bhai will stay hungry from now onwards. Maan says Dada bhai will eat with Ajabde Bhabhi ji. DB tells Maan to serve food to Jagmal; I will be back.

DB meets Pratap. Your father is waiting for you for dinner. He is upset as you are not there eating with him. pratap had already told his father that he wont be joining him for dinner tonight. DB says maybe something else is bothering him then. I thought it was because of your absence. Where were you going? Before Pratap can reply Ajabde calls out for DB. Pratap is going to meet his wife in his room only. DB tells her that the first union of a husband and wife is very important. We have to take out mahurat for that. She tries to take Pratap from there but Ajabde reminds her that she only had gifted Pratap the panchang (future predictions) for next 100 years. How will I forget the mahurat then? Yet I still consulted Pandit Chakrapani Mishra in this regard today. He too said that this is the perfect time. DB indirectly taunts Ajabde that this means the stars are in her favour then. You can go Pratap. Your father will get used to eating without you. He fumbles for words but DB leaves from there. Pratap too heads towards his room without saying anything to Ajabde. 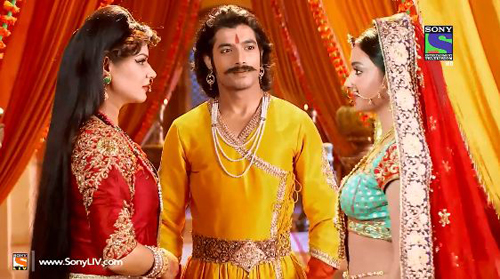 Gwalior’s king and his son enter Chittor. Soldiers stop them initially (as their faces were covered) but allow them in when they disclose their identity. They have come to meet US.

Ajabde comes and stands near Pratap in their room. Maybe I have crossed my limits (of manners and integrity) by asking you to be here with me tonight. I am sorry; maybe I shouldn’t have done this. Will you please forgive whatever I said? I accept my mistake. She turns to go to sleep but he holds her hand. I agree that you shouldn’t have said all that in front of DB but will you call all these preps your mistake too? She replies that she only thought of decorating their room a little. She tries to say something but he keeps a finger on her lips to quieten her. you don’t have to make any other excuse to hide your love. she is scared that he might think that she is crazy. He confirms it. she feels shy as he starts removing her jewellery one by one. She tells him that she is feeling nervous. He dint feel it when he saw her talking to Rani Ma about it. She hugs him. He picks her up in his arms and makes her lie on the bed. They both look at each other lovingly but he hears the noise of a bell and gets alert. This is a signal for emergency meeting. I will have to go. She nods in approval. 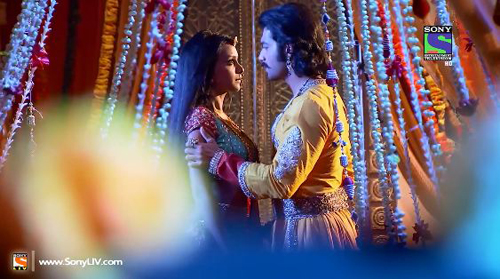 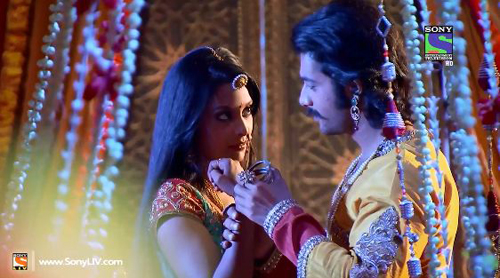 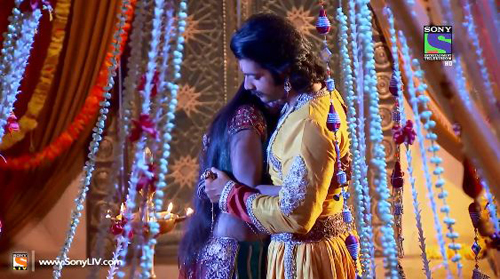 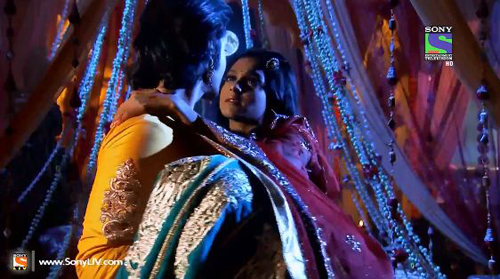 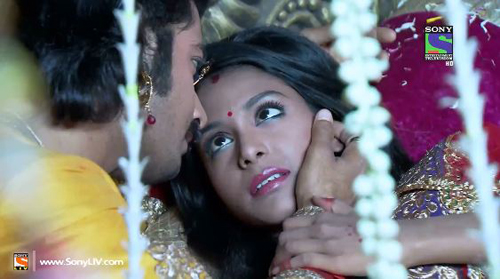 Bairam Khan is also searching for Gwalior’s King and prince. Till the time I find them my victory will be incomplete in Akbar’s eyes. Mughal soldier asks Bairam Khan who it can be from the Rajputana who can dare to shelter Gwalior’s king and prince.

Bairam Khan knows that there is one state where Gwalior’s king can find refuge. No other Rajputana state can be this foolish right now. If they have actually done that then we should declare it an open war against Mewar. I will have to head to Chittor asap to find Gwalior’s king and prince.

Rawat ji calls it Pratap’s emotional decision. I have the responsibility of yours and Mewar’s safety so I will not stop myself from speaking out the bitter truth when it concerns you. I can understand your intention of saving Gwalior’s king but if we provide him political safety at this time then we will be inviting a trouble for which Mewar is not ready right now. Pratap insists that they should not back out from supporting people in need. Rawat ji agrees. We should take good care of our guests but! Pratap interrupts him. I am well aware of all the consequences of my choice. If we don’t protect them then one day Mughals will surely take over our whole motherland. He turns to his father. This is the time to spread this message in Rajputana that we have to be together. Enemy might be big but we can take care of him if we are together. This is the time to take this tough decision. Jagmal speaks up. I don’t agree with you Dada bhai. If father is quiet then this means that he is taking his time to think. How can you force him to decide upon a conclusion in that case? US stops Jagmal. He points out to Gwalior’s king (Ram Shah Tanwer) that not just in his court, but his family members too have different opinions regarding this matter. I want some time (tonight’s time) to make the final decision. Please be our guest for tonight. Gwalior’s king thanks him for it. US leaves with Rawat ji. Jagmal is happy that finally his father understood his words. I countered Dada bhai in the court. Hail Prince Jagmal!

Ajabde is looking towards the door as she looks at the flower petals in her hand. She says I have waited for Pratap more than I have done anything else in my life. Pratap returns just then but is lost. Ajabde says I was just talking to flowers as you were not here. I don’t do it all the time. Pratap is still thinking about Gwalior’s king and prince. If we don’t allow shelter them here then no other state in rajputana will do it. Father cannot do it. Ajabde says this is wrong. He agrees with her. she points out that he is forgetting something. He nods. We are forgetting sympathy and our responsibility towards others. Why do we forget our responsibilities just to safeguard other people? She is confused. He replies that he too couldn’t understand people’s opinions in court. I tried to explain my point to father but I guess I will have to wait for his decision over the night. Ajabde feels bad. 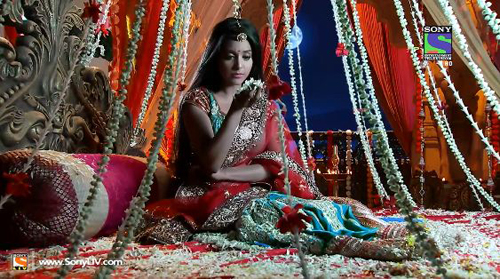 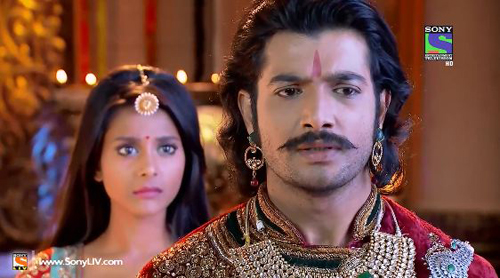 Precap: Bairam Khan is in US’s court. You are trying to provide refuge to these fugitives. This will be counted as your attack against Mughals so be careful. I will destroy Mewar’s identity in such a manner that you will have to bow down in front of Shehanshah to ask for anything. US shouts at him angrily while Pratap takes out his sword. Bairam Khan and Mughal soldiers follow suit.

A writer who loves to travel, read books, sing and live every moment as it comes!