Recap: Dev and Sonakshi return from their honeymoon. Dev plans to conduct Neil and Natasha’s wedding along with Neha and Ranveer’s wedding. Joy and happiness fills the Dixit household

Dixit House
Ishwari: Dev beta you both are back from honeymoon so shall we finalise the dates for the wedding rituals?
Dev: Sure maa
Neil: My parents are in the village Ill bring them here if you permit
Dev: What rubbish are you talking Neil? Why do you need my permission to call your family? In fact Ill arrange for their transport
Ranveer grows sad about not having a family . Sonakshi notices this and goes to him
Sonakshi: Waise Im thinking of shifting sides now
Nikki: Bhabhi what do you mean?
Sonakshi: I mean that Ill be on the groom side
Dev: This is cheating..Sonakshi how can you…
Neha: Haan bhabhi….you are my bhabhi right…
Sonakshi: Yeah but Ranveer is like my brother na thats why…
Ranveer: Sonakshi aap….
Just then Asha , Bijoy, Saurabh and Elena enter
Bijoy: Sona is right Ranveer beta
Ishwari: Arrey aap sab aayiye
Elena: Actually aunty…Sona and jiju have come back so we thought of visiting them
Ishwari: So you came to see only them not us?
Asha: No no Ishwari. Anyway its a wedding house so we thought we could help
Vicky: Not one wedding but two aunty
Sonakshi explains everything to the bose family
Bijoy hugs Dev and : Very well done beta.
Asha: Dev beta we are there with you. These weddings will happen without any displeasure. And Ranveer beta Sona said it right when we walked in. You are like our son. We will be there in the place of your parents in this wedding
Ranveer touches the feet of Asha and Bijoy
Ranveer: Uncle Im so thankful to
Bijoy: You don’t thank your parents for this
Neha runs and hugs Sonakshi 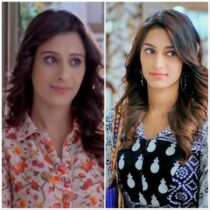 Neha: Bhabhi I thought that you guys will separate me and Ranveer as he doesn’t have family , I never thought that he will get so much love . Its all because of you bhabhi
Dev: Arrey wah kya baat hai…its all because of Bhabhi…bhai means nothing to you right
Vicky: Bhai I can smell something burning somewhere
Dev: Vicky do you need some more beatings or what?
Vicky holds his ears and : Sorry
Riya: Waise decide the dates soon. I have to get my clothes ready
RR: Sahi kaha Riya beta…
Ishwari: Ill call the pandit and fix them
With Ishwari leaving the scene freezes

One week later, Engagement day
Ishwari: Sonakshi….beta Sonakshi…..
Sona is upstairs and is carrying a thali in her hand
Sona: Maa…Im coming …..
Sona runs down and suddenly feels that her payal fell off her foot. She about to bend down and take it when she feels a hold on her leg. She sees Dev making her wear the payal 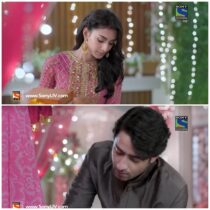 Sonakshi: Dev…
Dev gets up and looks into her eyes
Dev: Sonakshi
Sonakshi: What are you doing?
Dev: Helping my wife
His hands go around her and  hold her closer to him
Ishwari: Sonakshi…beta….
Sona: Dev..maa is calling
Dev: Let her call
Sona: Dev …please jaane dijiye
Dev nods his head in affirmation
Dev: Let me first check you
Sona: For…for..what?
Dev: Since we came back from Paris you are behaving weird
Sona: Acha?
Dev: You are not even coming near me or spending time with me
Sona: Woh.,..preparations for the wedding functions and work were there so…
Dev: So? Are all those important than your husband?
Sona: Dev please
Dev: Sonakshi…during our wedding we were away and thats accepted but now we are getting a chance to romance in all functions we should not waste it
Sonakshi: You are becoming so romantic Mr.Obodro
Dev: All credits to Dr.Bose
Sona: Its Mrs.Dixit
Dev: Haan Mrs.Dixit..and that means I have all rights to romance with you
He slowly leans forward to kiss her 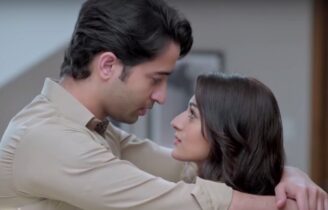 Sonakshi pushes Dev and : Behave like a good bride’s brother Mr.Obodro
She walks away. Dev smiles sheepishly and walks towards the opposite side.

The function hall is filled with flowers and people. Natasha and Neha are brought to stage by Elena and Riya. Neil and Ranveer are dumbstruck at their looks
Vicky: Oh ho…Bhabhi just check these two grooms seems like they need oxygen support
Dev: Vicky….
Vicky: Bhai…i was just
Dev: Not just oxygen …Sonakshi I guess we should monitor their heart activity too
Neha: Not bad Bhaiya
Elena: Wow Shona Jiju has improved a lot
Ishwari: If your random talks are over can we start the function
Everyone nod quietly. The couples exchange the rings. The episode freezes

Precap: Where is Sonakshi?