‘So why to do it late? Let’s do it now?’ Rishi said entering the room with a smile and Tanuja looked at him with creased eyebrows. ‘Why are you looking at me like this? Tell them the truth,’ he said and she looked down as tears came out of her eyes. ‘Speak up Tanuja, it is for their own good,’ Rishi assured and she wiped her tears. ‘Mumma who is he?’ Tanya asked. ‘Yes mumma what truth is he talking about?’ Natasha asked. ‘He is your father,’ she told him gathering courage. ‘So won’t you meet me babies?’ he asked. 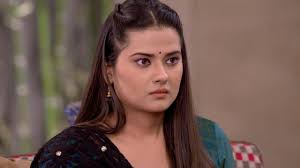 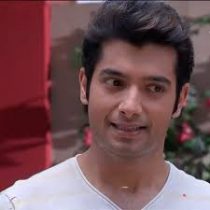 They ran to him and hugged him. ‘Mumma papa, if you are our parents then who were those who died?’ Tanya asked. ‘They were your adoptive parents,’ Rishi said. ‘And we are your biological parents,’ Tanuja said. ‘We never saw you here before,’ Natasha said. ‘Your mother and I separated for some reason,’ Rishi said. ‘You both talk to papa, I will just come,’ Tanuja said hiding her tears and went from there. She walked faster till she reached her cabin and closed the door behind her and pressed her back hard against it cryingly. She recalled her cruel past. 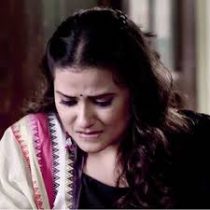 ‘Mom, this is Tanuja, we love each other and we want to marry each other,’ Rishi said coming inside the house with Tanuja, they were holding hands. ‘Where are her parents?’ Rano asked. Rano is Rishi’s mother. ‘They divorced each other and mom died after that, my father did second marriage, but my second mother did not want me, so I m alone,’ Tanuja said. ‘I want to talk to Rishi in loneliness,’ Rano said and Rishi went with her. ‘How will you live with such a girl who wasn’t loved? The one who isn’t loved can’t love someone.’

‘Mom this is no reason for me that I will not marry her, I have seem love for me in her eyes,’ Rishi said. ‘You want your mother or her?’ Rano asked. ‘Don’t blackmail me mom,’ Rishi said. ‘How will you both be happy?’ Rano asked. ‘Just like I was happy till now with her,’ Rishi replied and went outside and she followed him.

‘Rishi please, please go from here,’ Tanuja said. ‘Please open the door,’ he said and she stood up angrily and opened the door and pulled him inside and closed the door. ‘What is it?’ she asked. ‘Oh sorry, before you say something, I want to, wait,’ she said and went to the small cupboard of her cabin and took out a flower from it and closed the door. She showed it to him. ‘You still have it?’ He smiled. 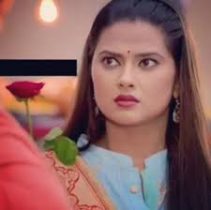 Tanuja got upset after Rishi’s parents refusal to her and stormed off to her house, later when she answered the door of her house and there was no one outside, she was about to go back but she saw red roses in a vase and picked them up. ‘Red roses?’ she said and smelled its fragrance. She saw a folded paper on the floor and picked it. It said, ‘I will keep loving you till the last rose dies in this vase.’ She smiled and went inside and kept the vase on her dressing table and smiled looking at them. She talked to her reflection. ‘Listen you. These are not ordinary roses, this is Rishi’s love for me.’ 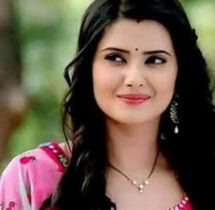 She smiled madly. Days passed by and she was worried that every day one rose died. When the last one was left, she was very tensed and was surprised as it did not die. She took it out of the vase and was surprised to see that it was fake. She smiled. ‘This means Rishi will never stop loving me,’ she said and got hugged from behind. ‘And the ones who die in love, they live forever and ever and ever,’ Rishi said and she smiled and blushed. 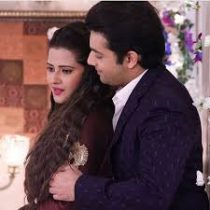 ‘Yes I kept it safe till now, but not anymore,’ Tanuja said and threw the fake rose on the floor shocking Rishi. ‘I will throw you out of my life like I threw this rose away,’ Tanuja said angrily and crushed the rose under her feet and went away. Rishi picked the rose from the floor and got teary eyed. Aarohi looked at the fireflies talking to them. 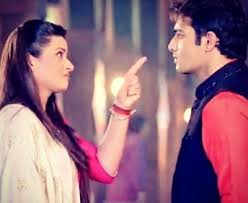 ‘Do you guys believe on me and Deep?’ she asked and they glowed and she smiled hugging the jar. ‘I should go talk to Tara, she might be so upset,’ she said and walked to her room carefully and tiptoeing so that no one sees her. She opened the door of her room and got shocked seeing it empty, nothing was in its place. ‘Tara! Ishita di!’ she shouted and ran to Lakshya’s room and knocked on it. He came out. ‘Aarohi, why you look so tensed? What happen?’ He asked. ‘Do you know where is Tara and Ishita di?’ 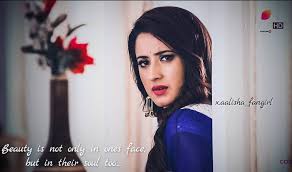 ‘Of course they would be in their room,’ he replied. ‘No Lakshya they are not there,’ she said. Deep came there. ‘What happen?’ he asked. ‘Someone kidnapped Ishita di and Tara,’ Aarohi said. ‘What?’ Raman asked in a shock. ‘Aarohi, it is good someone took Tara, no more danger,’ Ridhi said. ‘Bhabhi, she is in danger, please,’ Aarohi said and she rolled her eyes. ‘The girl who tried to kill your brother, you will take her side now?’ Aaniket asked. ‘I do not want to disobey you, but the people who kidnapped her are very dangerous,’ Aarohi said calming him.

‘Where is Ishi maa?’ Pihu asked. ‘She will come, go play with Niku,’ Raman said. From a room, continuous screams were heard as if someone is getting tortured and was terribly beaten up. It was Tara who was beaten up and was tied by chair, Ishita was sitting next to her in an unconscious state. They were Maya and Dr.Bhandari who had kidnapped them. ‘No, stop it! Please!’ Tara shouted getting pained. ‘Shanaya di,’ Tara shouted but she was unconscious. ‘She is not your Shanaya di, she is just a lookalike, Ishita Bhalla, your real sister died in childhood itself,’ Maya said.

Tara shook her head. ‘Roma had been lying to you, but do not worry, we will tell how she died,’ Dr.Bhandari said.

Little Shanaya had breathing problems and always got severe asthmas after laughing a lot, crying a lot, running a lot, or when she was in a room without air. One day, she fell down while playing and was crying a lot, Roma ran to her after Tara informed her. She took her to her room, of course she kept Tara away as she was very sensitive. She made Shanaya quiet and was treating the small wound on her knee.

During the procedure, she got a severe asthma attack and was closing her eyes again and again, Roma got her asthma pump and made her breathe by it and even called the doctor. The doctor came when it increased, he tried his level best, but she closed her eyes and died. ‘I m sorry, couldn’t save her,’ he said. Roma and her husband Raghav broke down, Tara never got to know about her sister being dead. ‘Mumma, where did Shanaya di go?’ Tara would ask her daily. ‘Beta she is lost somewhere, we will find her.’

Tara cried after she got to know the truth. But then she stopped crying. ‘You both are cheaters, she is my Shanaya di, she has taken care of me since childhood, don’t you dare,’ Tara said angrily and Maya started beating her and she screamed, Ishita woke up. ‘Stop it Maya! Even if she gets a small scratch, I will pull out all your teeth, do not forget I am a dentist,’ Ishita got angry. ‘You shut up,’ Dr.Bhandari said. ‘Doctor chachu get lost!’ Tara shouted and he untied her and dragged her tying her to the bed.

She cried knowing what’s coming next. She got Dr.Bhandari’s phone out and called on Deep’s number secretly to make him hear. Deep received Dr.Bhandari’s call and heard Tara’s shouts. He tracked the call. Lakshya and Raman were also with him. He just remembered her fear. ‘Drive fast, Tara might be very scared,’ Lakshya said worriedly. Dr.Bhandari grasped Tara’s face for acting smart and kept her hand on her shoulders and tore her sleeves, she screamed. ‘Stop it. Why are you doing this to her? Someone may do this to your daughter tomorrow,’ Ishita warned.

‘So should I do it to you fake Shanaya?’ He asked and grasped her face. ‘Shanaya di!’ Tara cried closing her eyes. Lakshya, Raman and Deep arrived there and the scenario in front of them boiled their blood.

Love is my Strength – A Preeran ff….. Marriage Outfits and teaser….