Walking together through the Memory Lane – Episode 15(Samaina FF) 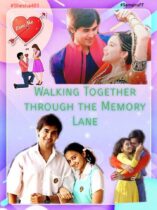 Naina, Sameer, Sonakshi, Arjun and Shefali were sittng together.

Sameer: No issues. Let us focus on the story. Next part is possessiveness.

Shefali: Yeah, Even when Sameer was her Sameer, he was too possessive for Naina. Naina had told me a lot about this issue.

Arjun: Oh, then let us start.

Sameer and Naina bid farewell to eachother. Sameer could not call her and the same from Naina too. But they both decided to post letters to each other. As Munna and Pandit’s house was near to Naina’s one, with the help of the these two days, they communicated through letters. 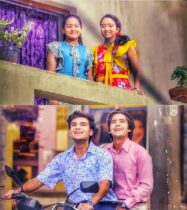 About five months have passed, (April 2015). Naina’s board exams were completed and Anand bought her a mobile phone for Naina.

Naina: After chachu bought me a for me, I started to save my friends number. As Sameer dominated my friends list, I just saved his number. As a part of lucky sign I called him first through my first phone.

Sameer: Actually, its not as lucky sign. Its because of her foolish thoughts.

Shefali: Yeah, I could remember. Naina asked Sameer to call her the first after he becomes a CE. Suddenly madam got a thought that for which number could he call her after becoming a CE. So, in order to say the number to Sameer, she called him first.

Naina: Enough of your tantrums…. Then, Sameer attended the call. But eventually, we again refound our old talks and we again started to speak through phone and facebook without bothering about Sameer’s parents…. 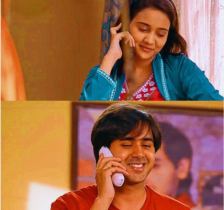 Sameer: Yeah, we again started our chats in Facebook. But Unless I complete reading atleast 2 chapters, she wouldn’t speak to me. I too obeyed that sincerely. (Puppy face)

Arjun and Sonakshi looks at him suspiciously. Sameer then reasurred.

Sameer: Yeah, I started to spy her Facebook account to check what was she chatting, to how many boys was she speaking etc…

Sameer: Then I would spy her account daily. If I didn’t get her reply within some minutes, I would jump to her account and would see whether the message has reached or not.

Sameer: Naina, shall we play a game?

Naina: During that time, I was so excited to play the game. But now only I know, it was to spy me… Idiot….

Naina: Wow, its such a awesome game. Let us start….

While they reversed the account and chatting, Naina gets a message in FB from one of her friends(boy). Sameer looks at it, the boy had sent him adult content related messages to her with some abusive and cheap messages.

Naina: Already, Sameer is low-tempered and possessive of me, then he saw such a message to his lover. His anger goes to next level. 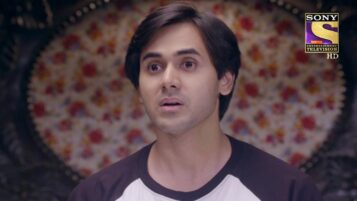 Sameer: Yeah, out of my anger, I scolded him in all kinds of Vulgar words I know like how Naina scold and then I blocked and deleted all the messages…. My angry was actually on Naina, how could she keep friendship with such ill-mannered boy like that….

Naina: Then he started to scold me. He didn’t even mentioned about those messages. I was like a dumb. I couldn’t understand why is this man scolding me like this. I was thinking like, Has his screw loosen?… like that…

Sameer: Then almost after few years, Naina saw my diary and found the actual reason behind my anger.

Arjun: Its good that Sameer thrashed that boy and pity Naina suffered a lot.. (laughs)

Naina: Are you making fun of me along with Sameer or sympathising me, bhai?

Arjun: Cool, dear. Bhai is always along with your side only. (smiles)

Then, Sameer would get overprotective of Naina and sometimes irritates Naina. Naina, then decided to maintain some distance with Sameer. Sameer senses the distance and decides to reconcile with her again. Again he make understand why he was possessive by saying some false tales other than he was loving her. Naina again believed him blindly because Naina couldn’t spend her time without Sameer. But still Sameer spies her account.

Naina and Swati are playing in ground…. 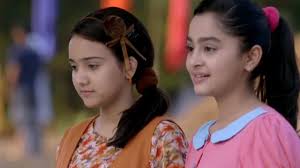 Swati: Naina, why were you not replying my messages in FB?

Naina: What silly question is this?  Because, I was not offline. It would show, right?

Swati: No, you were online. I saw the status. Often you were coming online, but you are not replying us…

Naina: Honestly, Swati…. How could I come online often when Arjun bhai and I  learning to cook? from Chachi? Most of the time, I am in kitchen with Chachi and Arjun bhai.

Swati: Naina, its your account and only you could use it.

Naina: No, Actually Sameer too know my password.. Just now I got reminded of it… We exchanged our passwords some days back… I thunk he is the one who come to my account and spying me…

Swati: Oh, its not a problem… Sameer must have come unknowingly… You don’t doubt him… Anyways, your password exchange game is so crazy. How hilariously funny you guys were. (She pokes Naina’s nose) 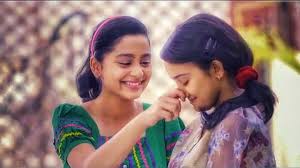 Naina: After this incident, I got a little doubt and enquired him directly. I also said him about changing my password…

Sameer: I was shocked atmost. My plans of spying were crashed. But I managed to be a innocent boy like, ‘If you doubt your friend, you can change it. No issues. I don’t even imagined, you would doubt me..”

Sameer: What an intelligence… Thats why she belongs to the people of Foolistan… 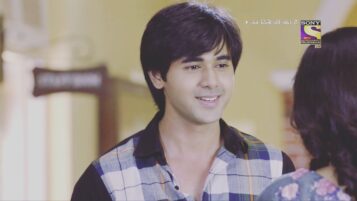 Naina: Pity me… I don’t even know you are the culprit…. 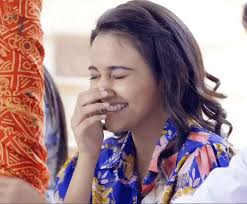 Sameer: It may look funny now but it was so irritating and depressing to have a possessive person as a friend or lover and even possessiveness is dangerous. I was possessive and narrow-minded because I was brought up at such a background and also because it is my first love.  But it couldn’t be a excuse. Doubts must not arise in relationships. It would make the relationship stale…

Naina: You’re right. Now you’re changed Sameer. you’re now broad-minded. I couldn’t imagine how would I be with the same old Sameer. Though I like his childish flirts like what soap are you using, what brand chappal are you using etc…, this is bit depressing….sometimes I got used to it too..

I am sorry if the update is late. Do leave your thoughts regarding this episode  as the writing pattern and content is bit different from the preious episodes. Also, the next two episodes would be bit sensitive as it would deal about ego clashes, decisions taken out of anger, its effect etc… Take care