Recap: Astha and Shlok enters Bhabho’s house which is in Ooty. Bhabho is said psychologically unstable by her son but she seems to be normal. Astha walks towards a rusted wooden door and suddenly she felt down and finds some blood in her legs but it is not her blood.

The third episode starts with,

Shlok – “Astha, what is happening in this house? First, Bhabho is speaking normal, Yug is seriously weird after coming to this house. And here is blood.” Astha – “I too could not understand, Shlok. But we have to do our work.” Shlok – “How can we do like this? This seems like we are in Ghost castle.” Astha – “Please Shlok, for us Yug is important. We have to bear all this. Please look after Yug. I’ll see what is happening here.” Reluctanty, Shlok goes to downstairs. To Astha’s surprise, the wooden rust door turns normal door. Astha – “Something is wrong in this room. But whose blood is this?”

Astha, Shlok and Yug have their lunch with Bhabho. The food is delicious. Astha and Shlok are surprised that she could cook deliciously like a typical mother. Astha and Shlok appreciates her. After lunch, three kids come to the house. Bhabho greets the children and gave some sweets. They eat the sweets. Bhabho says, “Astha, these children are my neighbourhood children. Let Yug to play with them.  He is too silent here.” Astha – “Bhabho, Yug could not play with these kids. He is intellectually challenged.” Bhabho – “Intellectually challenged. What is this, Astha? Let him play with kids. He would be alright.” Astha – “Bhabho, how could I make her understand?” Shlok  whispers to Astha, “Let him go with these children. I think instead of staying in this weird bungalow, he could play with the boys.” Reluctant Astha sends Yug to them. She requests the children to take care of Yug as he is too new for this place. Yug smiles and leaves with those kids.

Yug as an umpire and other kids plays cricket. Yug gets attached with the three kids. Yug watches their match. Yug relives by seeing their match. Yug giggles and laughs. Suddenly  a icecream rikshaw comes there, the three kids leave to taste icecream. Yug is sitting there. Behind the cricket ground, there is a big lake. Captivated by its beauty, Yug goes near the lake. Suddenly, a hand pats his shoulder. Suddenly near him, a appearance becomes slowly visible from leg to face. She is a girl of Yug’s age. Yug see her and calls, “Iti, you’re here.” 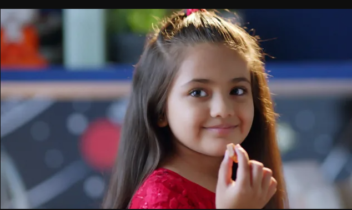 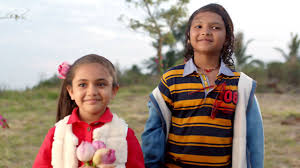 Iti – “Yug, that is really good. Thanfully you forgot the past. Otherwise..” Yug – “What?” Iti – “Nothing. Do you know when I lost my mother, I was mute for a year.” Yug remains silent. Yug and Iti lies on grass viewing the clouds. Yug – “Then what happened, Iti?” Iti – “Then, you visit me at my birthday party. My father bought me a cage of  beautiful love birds as my gift. But you came there and infront of me, you released the cage. As I was mute, I couldn’t say anything.” Iti laughs.  Yug smiles at Iti. 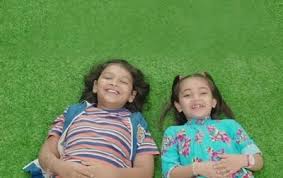 Yug – “Iti, Why did I release the cage? I am so mad. Then, your gift is spoiled.” Iti – “Yug, how can you talk like this? Birds could not be caged. Birds need freedom to fly anywhere. That is the beauty of the world. You’re the one who taught me this lesson.” Yug looks at her confused. Iti’s face becomes dull. Yug feels some headache inside. He feels the flashes in his mind of what Iti said. Yug – “Iti, Something is disturbing my mind” Iti – “Thankfully, you’re speaking something well. I achieved my first goal. soon, you’ll be alright, Yug.” Iti vanishes from the place. Yug faints but after five minutes he wakes up with some glow. He continues playing with the boys.

Astha is gazing the medicines prescribed for Bhabho. It is a capsule where the tablet is powdered inside. There is three bottle full of differnt capsule type tablets. For morning, two capsules to be consumed post breakfast and one in night post dinner.  She feels quite disturbed after seeing the prescription. Astha thinks, “She is normal even though she is mentally unstable, what is the need of giving these much tablets. It would be enough if they inject Diazepam twice. Shall I ask someother doctors? No need, afterall I am nurse.”  Astha thinks, “Bhabho is sleeping. I already forgot to give medicines in morning. Atleast I should give at night.” Astha goes to  garden to get fresh breeze where Shlok is also there.

In kitchen, a lady who don’t have any shadow (signifying she is a not a human) is searching for some box. She opens the upper shelf and takes a box. Inside the box, there is sugar. She pours the full sugar into mixie and she uses her powers and mute the mixie so that the sound of mixie is inaudible outside. She grinds the sugar crystals and it is made into a powder. A man comes into the kitchen. He pats on the lady’s shoulder. She turns and looks at him 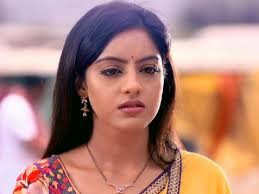 and he also has no shadow. 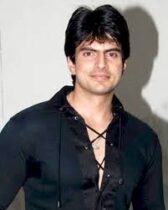 He asks, “Sandhya, is everything going to accordingly to our plan?” Sandhya (Deepika Singh Goyal) says, “Yes, DevGuru Shivraj ji. Everything is going to according to our plan. Bhabho won’t consume the tablets given by Astha.” Shivraj (Rahil Azam) and Sandhya laughs. The capsule jar from Astha’s room flies from there and reaches Sandhya’s hand. Sandhya and Devguru sit there comfortably. By their powers, The capsule opens into two and the powder falls into  a small jar and sugar powder gets into the capsule and it closes. After doing the same for all capsule, the capsule jar moves back to Astha’s room. Sandhya looks at the bowl where the original medicine dust is present. Shivraj and Sandhya touches the powder. Shivraj- “Now, Bhabho will not consume the so called medicine. Only sugar powder. We shall deposit this so called medicine powder in Garden.” Sandhya – “But Shivraj ji, Astha and Shlok are in garden.” Shivraj – “No problem. Our magic will deposit the powder there.” Shivraj and Sandhya recites magical words and the medicine powder is deposited on every plant and tree in the garden. Sandhya – “Astha and Shlok did a big mistake by coming here. This place is very dangerous. I think they won’t go outside with their life.” Sandhya and Shivraj vanishes.

Yug returns home with other kids. Astha is overjoyed seeing Yug is smiling. Shlok feels relieved. Yug speaks in a stammering tone “Mom, I have a very great day with these children. Especially Iti is too friendly with me.” Astha cries in happiness and Shlok eyes shine. Yug hugs Astha and Shlok. Shlok – “He is improving, Shlok. He is speaking someother words rather than his name and rhymes.” 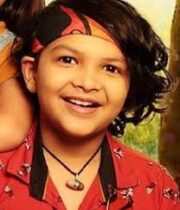 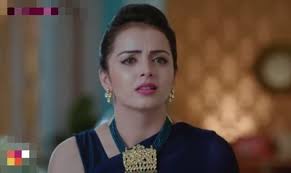 Astha – “Bhabho is the reason for my son’s happiness.” Astha hugs Bhabho. They had a very good dinner which is cooked by Astha and Shlok together. Yug goes to sleep. Astha gives capsule tablet to Bhabho. She had the tablets.

Bhabho asks Shlok and Astha to sit near her. She caressed their hair. Bhabho – “You said that you broke all ties with your family.” Astha – “Why shall we speak about this, Bhabho? You shall sleep now. We can speak whatever tomorrow.” Bhabho asks Astha to keep quite and childishly scolds her. Shlok laughs at her. Astha stares him. Bhabho – “Shlok, please take the small rectangular box upside the cupboard.” Shlok takes the box and gives it to Bhabho. Bhabho gives it to Astha and Shlok and asks them to open it. Inside the box, there is some pieces of Zig-Zig puzzle. Bhabho asks them to join the puzzle pieces and solve it. Shlok and Astha use their mind to join the pieces. But they could not join the puzzle. Shlok – “Aunty, it is too tough to solve. Your son Kapil is seriously intelligent  to have this puzzles” Bhabho – “Try for some more time.” After trying several times, they could join some pieces in the puzzles. They found that there is lacking of puzzle pieces. Astha – “Bhabho, It is too much. Many puzzle pieces are missing, then how could we join the puzzle.” Shlok nods his head.

Bhabho – “Look child, our family is also like these puzzle pieces. It is full of happiness, proud, shame, self-respect,  responsibilities, joy, anger, motivation, fear, pleasure, adjustments, pranks and silly jokes. Also importantly, family is like a puzzle. We should understand the puzzle and then only  we could solve it. Same like, we should understand our family and then should solve our problems” Shlok interrupts, “Our family has only negative puzzle pieces like shame, anger etc with contrast to this game.” Bhabho smiles, “You should search for the positive pieces. It wont be hidden anywhere but in your family like house.” 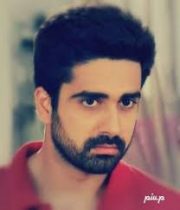 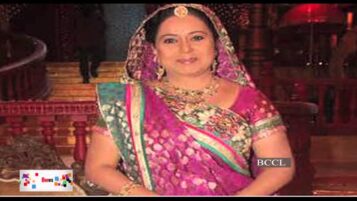 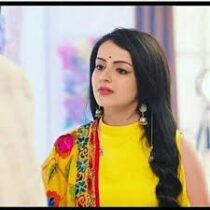 Astha looks at the box. She notice that a cloth is covered the bottom. She removed the box and finds rest of the pieces. Bhabho – “Hope you solve this puzzle piece and your puzzled family.” Astha and Shlok speaks nothing and solved the puzzle.  Bhabho smiles along with Shlok and Astha. Bhabho greets them to have a good night. Shlok and Astha comes out of Bhabho’s room. Astha – “Shlok, we are full of ego. We should take atleast a single step to sort out our problems.” Shlok – “But we should stand in our own legs  before that.”  They go to sleep.

In the terrace, Iti, Sandhya and Devguru are sitting. Devguru – “Where is Arun?” Sandhya – “Dad will be come soon. Wait Shivraj.” Arun (Ashok Lokande)’s appearnce becomes visible. His face is full of anger and pain. Arun – “Are you sure that Santosh (Bhabho) consumed only sugar powder?” Shivraj nods. Arun – “There is no problem if my wife Santosh didn’t recover. We should warn the couple to get out of this house.” Sandhya – “What shall we do now?” Iti – “I think those couple are caring Yug as their son.”  Devguru – “We shall wait for some days”

Suddenly, they see Astha is covering herself with  a blanket and going to the suspicous room where she found blood there. Shivraj goes near her and hears what Astha is goingto do. Astha murmurs, “I should find whose blood is that by sneaking into that room.” Shivraj looks confused. Arun – “We are the one who panicked Astha by making the door wood to rusted. But we are not the one who poured blood there.” Iti – “I tried to enter the room but I couldn’t even step near it.” Sandhya – “It was actually drawing room but now it seems so weird. Somehow we should find what is going in this room.”

Astha takes a fake key and opens the door. (In Flashback, Astha met a man to make key for a lock and she gives some money for that.) 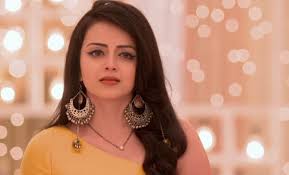 To her surprise, the room has some stairs that leads to underground. After coming down, she finds a big dark hall.  There she hears a weird noise of a animal shouting minimally for food. Astha shivers. To her knowledge, she guessed there is some ferocious animal eats man. She puts the torch down and leaves the room in a hurry. She locks the room. Iti, Shivraj, Arun and Sandhya looks at Astha’s feared expression. Sandhya – “Whatever is there is not our problem. But we should start our revenge that is continuing for 2 years.” The four smirks and Astha shivers and gets into the bed.

The scene moves inside the drawing room. The flash from the torch reflects on a board written “MANEATER” 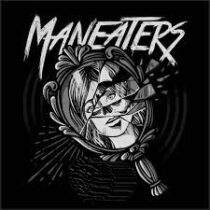