Randhir’s father says how he could not fix only one thing all his life that was his broken heart and tells how noone knows real Renuka. They both hug and Randhir is emotional. Vardhan who is passing by sees this and leaves. Dean tells Vardhan how Delhi college has announced names for their dream project which is headed by Kabir. Hearing the name Vardhan is shocked. Dean asks if he remembers Kabir, himself and Niharika. Vardhan makes an excuse and leaves the place.

Sanyukta goes to library to issue books when she sees some books that have been ordered by Vardhan to burn. She checks them and finds dream team project file. She comes to know the project was headed by Niharika. She goes to Vardhan and asks who is Niharika Oberoi. Vardhan shouts at her and closes his cabin door.

Randhir asks his father to promise him he will quit smoking and drinking. His father changes the topic. Sanyukta and Kaustuki are packing when Sanyukta realizes she forgot her laptop in lab and goes to get it. Before leaving his father apologizes to Randhir for whatever embarrassment he had to face because of him and tells him to apologize to Sanyukta on his behalf. Randhir is angry at Sanyukta for insulting his father. He goes to her room but doesn’t find her there.

Sanyukta is working in lab when Randhir comes there and shouts at her for insulting his father. He says she could not respect her dad but he will not tolerate anything against his father. Sanyukta gets angry and says her father had a misunderstanding because he was drunk. Randhir tells her not to call his father drunk. The argument gets intense with Sanyukta slapping Randhir and Randhir kisses Sanyukta. Sanyukta pushes Randhir away. Sanyukta is shocked whereas Randhir is guilty and regrets realizing what he did. Both remember what just took place sometime back. Both walk out of lab. Vardhan spots Sanyukta and calls her but she doesn’t respond. He then sees Randhir walking in opposite direction. 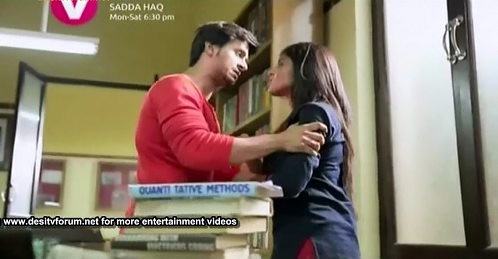 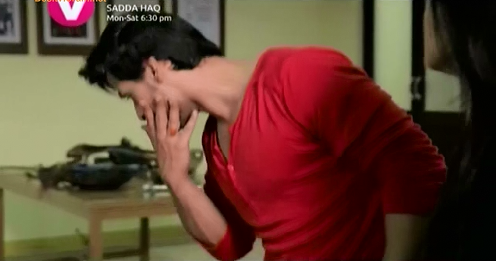 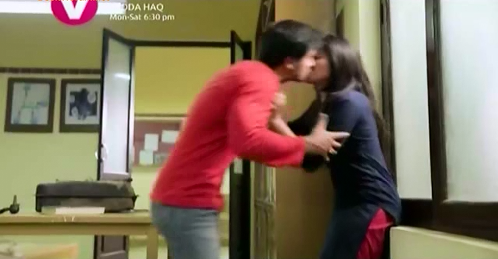 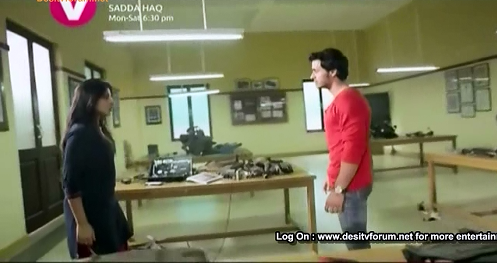 Randhir comes to his room asks Jignesh to hit him when he does not he slaps him. Jignesh finally hits Randhir. Sanyukta enters her room and remembers the incident flashes. She changes and comes out starts continuing her packing. Kaustuki tells her she wore her t shirt wrong and asks if something is bothering. Jignesh keeps hitting Randhir until he asks him to. Randhir tells now she is out of my system and apologizes to Jigesh for hitting him. Randhir and Sanyukta are sitting on their beds in deeps thoughts with flashes of lab incident coming in front of their eyes.

Precap: Randhir and Sanyukta come face to face. Jignesh asks Sanyukta if she told Randhir anything. Dean tells Vardhan Kabir wants to beat him. Mr.Agarwal tells Sanyukta a good family is coming to see her after a week much to her shock.