Seher has came with a surprise!

Sanam – “Will you stand there or come inside ?”

Seher gets a smell and she tries to find out what is it.

Seher gets in and Sanam takes her bag from Seher. Seher goes to meet Dilshad.

Dilshad see her and gets happy.

Sanam – “ Go and have bath , you came after a  train journey… Badi Ammi shouldn’t get any infection in this condition“.

Dilshad – “ Sanam, How was your first day at office ?”

Sanam doesn’t look into her eyes and reply.

Dilshad holds her hand and understanding her behavior.

Dilshad – “ You don’t look into my eyes , if you are affected my something “.

Sanam – “ Everything was new to me .. thus it will take some time to adjust “.

Dilshad – “ Its True , But you should control your anger “.

Dilshad giggles and Sanam looks her.

Seher comes out after getting fresh. By the time, Afeeza comes back after her job. Afeeza – “ Sanam, How was your day?”

Sanam (low tone) – “ I somehow managed, there is a long story.., I will tell you after sometime “.

Afeeza smiles and see Seher and waves hand at her. She waves back. Afeeza goes to get fresh. Seher is sitting near Dilshad. Seher is giving her a massage. 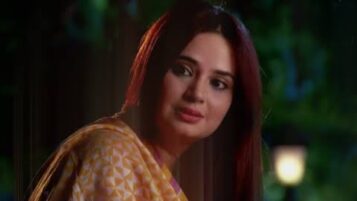 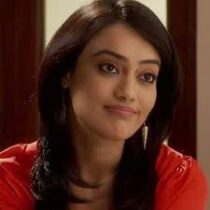 Seher – “ Badi Ammi, I understand you miss me a lot .. that doesn’t mean you would go for a picnic to hospital. From now on you should take rest and be happy”.

Sanam , Afeeza , Haya comes there and they looks on .

Sanam – “ What !! So you got selection after interview “.

Haya smiles and signs that she too need a treat.

Seher – “ I didn’t got selected in the interview “.

Seher – “ That interview was just for namesake. If I want a job in their company, I should pay them a huge amount. So I asked them to keep their job for some other one . But.. there comes the twist! I meet Best FM owner – Mr.Abeer Malhotra. He was looking for an RJ. He liked my talks and he has asked me to come for interview tomorrow. That interview is just for a formality “.

Sanam- “ I hope so. Now come on everyone, let’s have dinner”.

Sanam serves  the sweet dish for everyone. 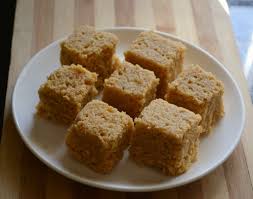 Aahil comes home. Gazala and Rassaq is present in the living area. They see him . 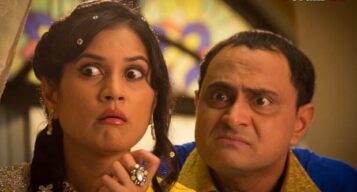 Gazala – “ What did advocate said about Begum Sahiba’s release ?” 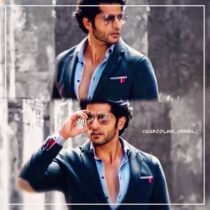 Gazala- “ When she come back we should do that… “.

Gazala- “ That … which we do by calling everyone “.

Gazala- “ We heard that you appointed new P.A. , we heard that it is the same girl who had fight with you that night “.

Aahil goes to his room. He freshen up. He sits on his couch .

Nazia comes to his room.

Nazia – “ Afterall someone came to your life “.

Aahil turns to her. He gets surprised seeing her.

Nazia – “ Why did you hide it from me that you hired Sanam as your personal assistant?”

Nazia – “ Rehaan bhai , told me that you helped her when her Badi Ammi was hospitalized. You gave her this job to support her , right ?”

Aahil – “ I just helped her because she helped you that night .. nothing special “.

Nazia – “ But your action say something else “.

Aahil got surprised by her comment . He just looked to other side. Nazia looks him with a naughty smile .

Aahil (thinks) – “ I just can’t tell you that I appointed her to teach her a lesson “.

Aahil – “ No .. I was thinking something else. What were you asking?”

Nazia leaves the room . Aahil breath out and relaxes.

After dinner . Dilshad goes to bed. Haya , Seher , Afeeza  is sitting in the living area . 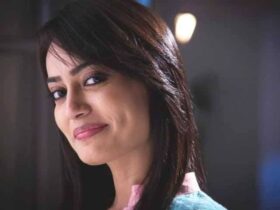 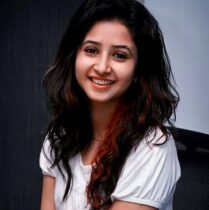 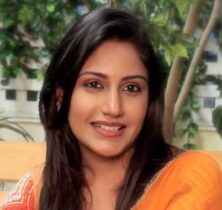 Sanam comes there after keeping everything back in kitchen. Seher see her and calls her to join them.

Haya gets excited along with Seher & Afeeza .

Sanam nods and she tells them the whole story.

As she finishes the story. Seher starts to laugh uncontrollably. Sanam looks her sternly. Afeeza is controlling her laughter and tries stop Seher from laughing when she see Sanam getting angry. 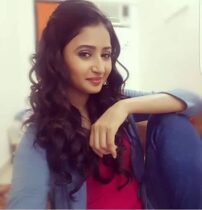 Sanam (angrily) – “ You are laughing at my helplessness?”

Seher – “ Not at all.. I couldn’t control my laugh because you are working under that person who you hate the most. I am wondering how did he escaped from getting punched from you  “.

Seher – “ But I should say you helped him to get rid of his girlfriend.. but when I asked you once to help with my prank you didn’t agree . You didn’t helped your sister but helped your enemy.. what’s happening.. Haa ?”

Sanam – “ What do you mean ? I was helpless otherwise I wouldn’t have done that “.

Haya signs  to Seher that Sanam and Aahil will look good together .

Sanam gets irritated. While others have fun while teasing her.

Seher – “ But I like your Boss Aahil .. It’s all because of him you asked for a help from me and I got my favorite sweet “.

Seher , Afeeza and Haya teases Sanam with Aahil. She gets angry..

Seher – “ If you allow me , I can go in your place to your office. I can assure you that he will fire you without asking you to apologize. What is your say ?”

Seher – “ You don’t know to handle him .. if I were in your place… I would have changed to sweet person with my talks “.

Sanam – “ He won’t even think about it .. Firstly he doesn’t like me at all , second thing is that I won’t let him flirt with me or come near me “.

Sanam senses what are they meaning to say . 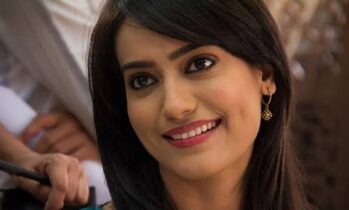 Sanam – “ I don’t want to talk to you guys . You all became a team and left me alone . Rehaan is better than you , atleast he doesn’t make fun of me “.

Seher gets into thought

Sanam came to Aahil’s house . She started to do jobs . She checking his schedule. Nazia see her at his study room. 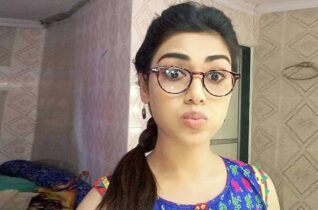 Nazia – “ Is everything okay between you and Bhai jaan ? “

Nazia – “ Bhai jaan is not that bad .. as you think . He is little adamant sometimes.  I can give you tip to handle him … if you be soft to him , he will behave in same way “.

Shazia comes there and gets upset seeing them talking .

Shazia – “ Nazia.. if you stay with such low class people.. you will lose your standard”.

Sanam lose her cool. She walks towards Shazia .

Sanam – “ Please don’t think that being rich will give you standard. I have heard that people should be polite and kind as their position becomes big. It’s true that Iam working an employee that doesn’t mean Iam low class . I do have dignity and an individuality “.

Sanam – “ Its not bad to learn things from others if you don’t have much knowledge about life “.

Shazia is about raise her hand .

Sanam – “ Before you raise your hand , please do remember my hand isn’t tied “.

She goes from there .

Nazia- “ Iam Sorry for her behavior “.

Sanam goes to Aahil’s room with his bed coffee.

Shazia is standing there with Aahil. Sanam senses that Shazia has complained to him about her . 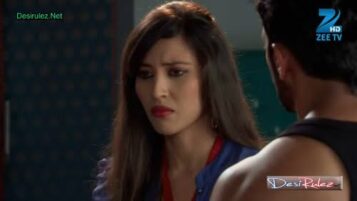 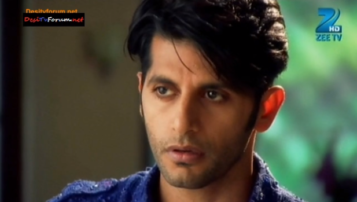 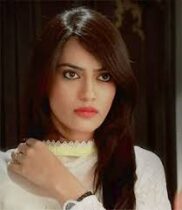 She gives the coffee to him.

Shazia – “ Because she was insulting me“.

Sanam – “ I & Nazia was talking to each other. Shazia didn’t liked it . She is the one who spoke ill about me , I just told her that it isn’t right . She became angry and was about to raise her hand over me , then I just reminded her that my hands are not tied. That’s it “.

Sanam – “ I haven’t done anything wrong, then why should I fear to say the truth. Sir , if you want you can confirm it from Nazia . She was present there . Iam keeping your coffee on the table , excuse me “.

Aahil – “ Shazia, I think you should leave for your college “.

Shazia – “ You don’t have any control over your P.A.  , that is why she isn’t hearing anything you say “.

Shazia leaves . Aahil takes the coffee and drinks it. He thinks.

After sometimes, Sanam gets a call from Rehaan. 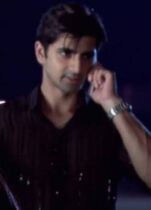 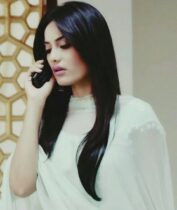 Sanam – “ Maybe he is doing his work out or gone for bath. What’s the matter?”

Rehaan – “ One client will be arriving soon at office. So please ask him to come to office within 1 hour “.

She hangs up the phone . Sanam walks towards  Aahil’s room.

Sanam – “ Rehaan had called you but since you didn’t pick the phone , he called me. He asked you to come to the office within an hour . As a client will coming there very soon … I think it’s an important client “.

Sanam – “ I will bring it , Lateef had told me its already ready … should I get your breakfast packed or you will have it from office? “.

Sanam was about to leave . Aahil thinks and then stops her.

Aahil – “ Sanam , you are my employee . I expect you to behave well with my family members.. “.

Sanam – “ Iam behaving well with everyone “.

Aahil – “ Really, then why did you had fight with Shazia ?

Sanam – “ I didn’t initiate it .. I had already told what happened . So I don’t think it is needed to be discussed “.

Sanam is about to leave but Aahil hold her back and pulls her close . Sanam gets shocked. 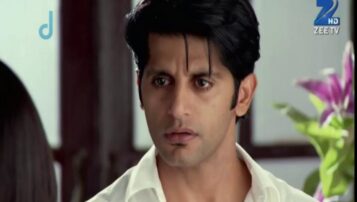 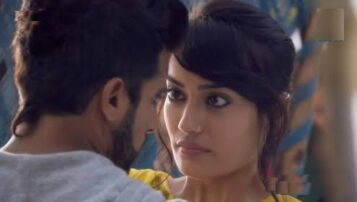 He then leaves her hand.

Sanam – “ Iam not finished yet .. Shazia was insulting me . I was just making her understand that she is wrong . I think even Shazia is not wrong . Siblings learn from their elder sibling , even you don’t respect anyone and judge everyone upon their financial level. If she does anything bad that means even you are responsible for that “.

Sanam – “ You always try show me down . Even you appointed me here as your P.A. just to trouble me , so that you can insult me whenever you want. Your ego was hurt when I fought against you “.

Aahil gets upset by her remarks. He turned his face from her and he moves back.

Sanam – “ I hope you are done . By the way, please don’t attempt such things next time . I mean pulling me towards you and all “. 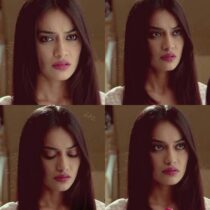 Aahil – “ What did she mean ? Iam the one who spoil my sister . Then what did she mean by ‘don’t attempt such things .. pulling her towards me!! ‘ seriously. I just mean to get my answer.. why would I bring her close to me . Sanam , Not at all !Shazia was right , Sanam is becoming over smart “.

A lady staff – “ I heard everything you said to that girl yesterday. I will tell this to Aahil Sir“.

Aahil calls Sanam to his cabin . Aahil looks her sternly. Sanam looks him being confused.

Authors note :- Dear Readers , please do give your opinions and suggestions in the comment section.

Passionate towards Story telling . Every story teller lives different life in the same lifetime , I feel blessed Iam one among. Every opportunity brings out best in you.❤️???