Hi guys, here’s the chapter one… So read and enjoy….❤❤

It was a beautiful morning, sun was shining brightly wind was blowing slowly making the atmosphere little cold.

Three girls in their early and mid twenties is seen sleeping peacefully cuddling their pillows. A woman in her late- thirties came their and slapped her forehead slightly seeing her daughters sleeping till now. She goes towards them shake them a bit to wake them up.

WOMAN: Girls wake up see its too late.

WOMAN: No, get up now or else you will get late for your college and Kiara you for going office.

After many pleading the girls waked up rubbing their eyes like a small child and hugged the women.

And kissed their forehead one by one.

Yes, the girls were none other than Prachi, Kiara and Rhea. And the woman is Pragya.

PRAGYA: Go and get ready.

They nodded at her and ran to the washroom. While Pragya went to kitchen to make breakfast. 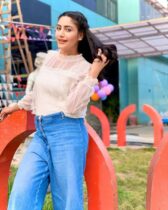 Rhea was wearing wearing a multicolored top and blue knee length skirt  with opened hair and hairband with minimal makeup.

Trio give hi five to each other and looked at each other with attitude in their eyes.

They went downstairs and took blessing from elders. They went towards Abhi and hugged him.

They sat down on dinning seats and started their breakfast and was doing some chitchating about random topic.

After doing breakfast, Prachi and Rhea bid bye to the Mehra’s and went from there to their college. While Abhi also left from there for office with Kiara..

After completing their gym sessions, they open their t-shirts and cleaned their sweat from their faces and looked at eachother with  challenging look.

BOY 1: Bhai are you ready for todays challenge??

BOY 2: You are underestimating your bhai, chhote. Today also I will win in the race.

BOY 2: We will see bhai, who will win and who will lose.

He said while forwarding his hand to him. Boy 2 looked at his eyes and did hand shake with him.

They both were none other than Ranbir & Rishi.

Both smiled at each other and went from there to their respective rooms.

After sometime Ranbir came outside from his washroom wearing a black tshirt with red jacket and black jean.

He went towards his mirror in his room and set his hair with gel. Wear his watch and apply a perfume and smiled at him self. He was not looking less then a Greek god.

Rishi was standing in his lavish wardrobe choosing clothes for himself.

After sometime he selected clothes for himself and went for getting ready. After few minutes he came wearing black tshirt with black leather jacket and black pants.

After getting ready, he started going towards the hall where everyone was waiting for them for the breakfast.

In corridor he bumped with someone and was about to fall but someone holded him by his shoulder. Rishi looked at the boy and was shocked.

Yes the someone was Siddharth.

SIDDHARTH: Sorry bhai, I was getting late, and you know naa how is mom she will start shouting.

Just then they heard a voice of Pallavi who was shouting their names. And they both burst into laugh.

They both ran towards the hall where everyone was sitting including Ranbir who came just now listening his mom’s voice. Rishi & Siddharth took blessing from elders and settled themselves for the breakfast while Ranbir said.

RANBIR: Dad actually I was thinking to come office today as today is off in college.

After having their breakfast Vikram along with Rishi, Ranbir & Siddharth went towards their office…

That’s all for chapter one, hope you’ll liked it. Do tell me how was it in the comment section. And give me your review on my this FF.

RIANSH (They Have No Boundaries) E23 (OPTIONS)