Anshuman told Pakhi:My mother will come back from pilgrimage in 2 days.Then I will tell her about you.Then we will get married.After that you,Ayaan and I will be staying together as a family.

Pakhi blushed and pressed her lips on his cheek. 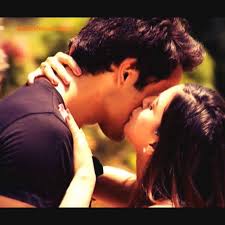 Pakhi pushed him out.

The calling bell rang in 2 minutes.

Pakhi opened the door.She was shocked.

It was Pakhi’s ex-husband Rohan.

Pakhi could not believe her eyes.

Rohan:I have come back Pakhi.

Pakhi:Why?You left me years back.

Rohan:That time you requested me to return.Now I have returned as per your wish.

Pakhi reacted in a sarcastic tone:O really?After many years only you have returned.

Rohan:I know that I did a big mistake.But I realised my mistake.Leaving you for another woman was my biggest blunder.She never loved me.She loved only my money.When I was in financial crisis,she left for another man.That moment I realised your value.You had stood by my side when I was not rich also.That’s why I returned to you to correct my mistake.Please forgive me and accept me back.

Pakhi:It’s not easy to forgive you after you hurt me a lot.

Rohan:Atleast for the sake of our child please forgive me.

Pakhi:Till now you did’nt remember our son.Suddenly you remembered him.Don’t use our son to get my apology.

Rohan:You are misunderstanding me Pakhi.I have always loved my child.I wanted to see my child.But my girl friend Tanu did not let me visit our son.Please give me one more chance.I swear that I will not disappoint you.

Pakhi:I can forgive you as I don’t want to keep personal grudges in my mind.

Pakhi:But I can’t accept you back as it’s not easy for me to forget the bitter past I had because of you.

Rohan:Your anger is justified.But I promise you that I win your heart back.And..I will do that.

Pakhi:Don’t waste your time Rohan.You can never win my heart. 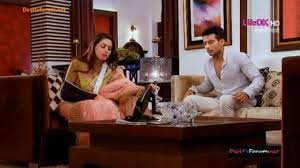 Pakhi did not even bother to reply.

In the evening Ayaan came back from school. 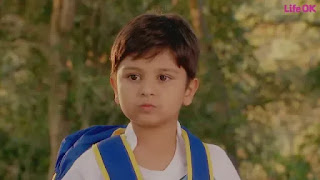 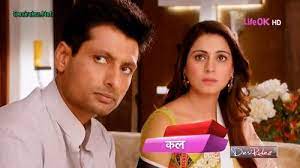 Pakhi:I don’t have to answer this question. 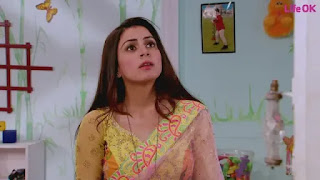 Pakhi walked away with Ayaan.

Ayaan asked Pakhi:Mumma,why did that uncle lie that he is my father? 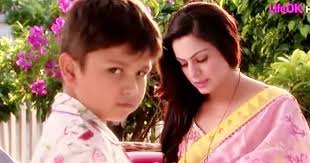 She thought:If I hide the truth from him,once he will misunderstand me and question me for hiding his real father from him.I have to tell him the truth.

Pakhi:Ayaan beta…he is the one who gave you birth.That’s why he said that he is your father.

Pakhi was tensed to see his reaction.

Pakhi:Beta…it’s not necessary to give birth to be a father.Through heart and love,one can be a father.Anshuman became your father by heart.Because he is the one who gave you fatherly love.

Ayaan:Mumma,but I want only Anshuman papa as my dad.I don’t want the other person as my dad.

Anshuman:Why did you ask me to come here soon sweet heart?Any romantic surprise?

Ayaan stared at both from behind. 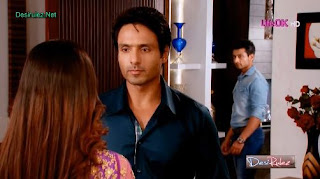 The shocked Anshuman turned back.He saw Rohan looking at him.

Rohan became dull while Anshuman smiled in relief that Pakhi has chosen him over Rohan.

Rohan:My son Ayaan said that you are his father.But I did not understand how you became his father.Did you and Pakhi get married?

Rohan:So you both are just friends?

Pakhi:Whether we are friends or more than friends should not make any difference to you.Because you are only my ex-husband.You have no right on me.

Anshuman smiled while Rohan got irritated.

Rohan:I am going now.But I will come back.

Pakhi looked at Anshuman and said:Rohan has come back shamelessly after his girl friend left him.I told him that I can’t accept him back.But I feel restless and tensed thinking of him.

Anshuman caressed her face and said:You told him that clearly that he has no place in your life.Then why are you worried.Do not care about him.Just ignore him.

Anshuma:My job is to remove your unnecessary worries and give you happiness.So when I am with you,why should you worry?

Pakhi:I sent him to Anant and Namrata’s house purposefully to keep him away from Rohan.Because Rohan’s presence was making him lose his peace of mind.

Anshuman sat and pulled Pakhi to his lap romantically.

Pakhi blushed:What is this Anshuman?

Anshuman:Ayaan is not here.So don’t tell me that somebody will see us romance. 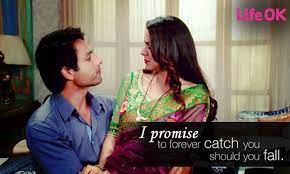 Anshuman told Vasundhara about Pakhi.He was tensed about her reaction.

Vasu:You don’t know my reply?Will I ever stand against my son’s happiness? 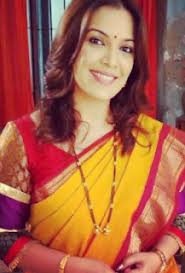 Anshuman:I was worried whether you will object after knowing Pakhi’s past.

Vasundhara:No beta.During Anant-Namrata’s wedding functions I had noticed your sweet friendship with Pakhi and wished to get Pakhi as her daughter in law.But I saw Pakhi talking to her son on the phone.When I asked Namrata about Pakhi,she told me that she is a divorcee.I was worried whether you will like Pakhi or not knowing her past.But now I am happy that you accepted Pakhi and Ayaan as your own knowing evetything about them.

Anshuman:You are the best mom. 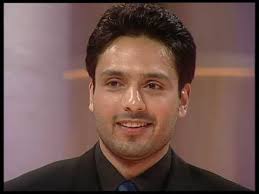 The next day when Ayaan went to school,Anshuman,Pakhi,Anant and Namrata went to a restaurant.

Anshuman:There is a happy news.Mom is very happy that I want to marry Pakhi.Infact she had chodsen Pakhi as her future daughter in law during Anant and Namrata’s wedding itself.

Anant,Namrata and Pakhi were very happy.

Anant and Namrata got angry.

Anant:How dare he come back?You should have slapped him Pakhi.

Pakhi:I don’t want to fight with Rohan and make things worse.I just want to concentrate on my present and live peacefully.

Anant and Anshuman got so angry that they raised their hand to slap him.But Pakhi held their hands to control their anger. 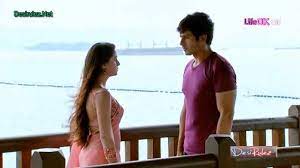 Pakhi looked at Rohan angrily and said:Stop calling me sweet heart.I am not your sweet heart.

Rohan:Then whose sweet heart are you?Anshuman’s?Are you having an illicit affair with Anshuman?

Pakhi:Stop it.Anshuman and I share a pure relationship which is filled with love and dignity.Yes,we love each other.

Rohan:It’s all because of you Anshuman.Because of your illicit relationship with Pakhi,she raised her voice against me for the first time.Get out of our lives. 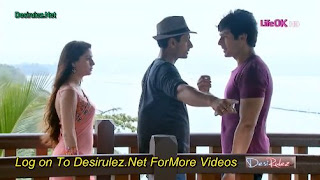 Pakhi:Ayaan and I belong to Anshuman.Not Anshuman,it’s you who have to leave from my life.So get out of our lives.If you trouble us again,I might call the police. 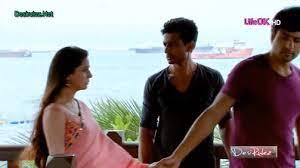 Anshuman held her hands and said:I will also hold your hands always Pakhi. 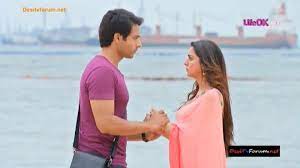 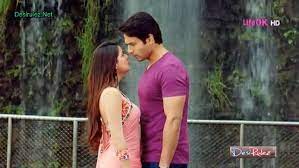 Anshuman:Shh…kuch naa kaho…don’t say anything.I don’t need your words to understand your love.I can just see love in your eyes.

Pakhi smiled and embraced him. 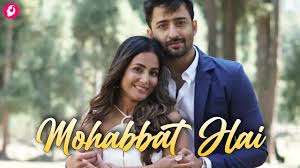 Anant:If you have atleast 1 percent self respect just leave Rohan.

Rohan:I realised that when we hurt the person who loved us the most,there is no second chance.I am sorry for everything.I will not disturb you all anymore.

Rohan walked away in frustration.They all were relieved. 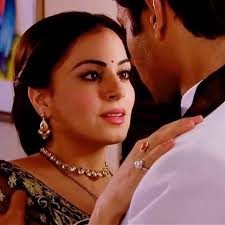 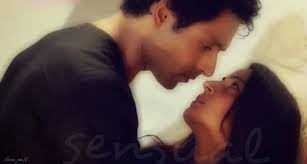 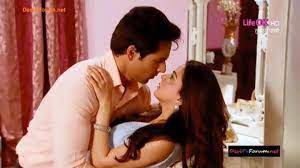 Pakhi and Anshuman got married.

Anant-Namrata:Made for each other jodi.

Anshuman and Pakhi romanced breaking the barrier between them and became one. 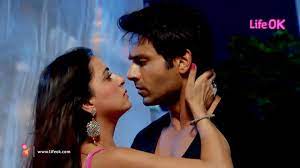 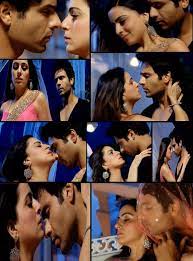 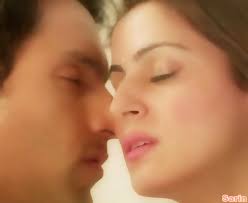 Anshuman came back from the office.He saw Pakhi in the garden.

Anshuman:Why did you ask me to come back soon Pakhi?What’s the emergency?I am becoming restless. 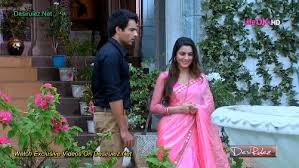 Pakhi:Look there Anshuman.Near the wall you can see a cat and her babies.

Pakhi:The cat is so happy with it’s kittens.Because babies bring a different happiness to our lives. 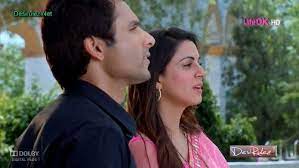 Anshuman kept his hand on her shoulder and said:Yes..like Ayaan brings us happiness every moment.

Pakhi held his hand and said:We are pregnant Anshuman.Ayaan is going to get a sibling. 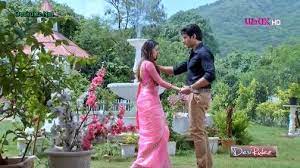 Pakhi blushed and gave him a nod.

In excitement,Anshuman pecked her cheek. 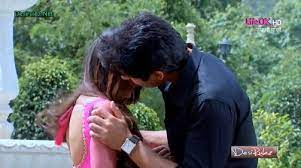 They embraced each other happily.

Anshuman Pakhi had a daughter and they named her Anshukhi.They lived happily with Ayaan and Anshukhi. 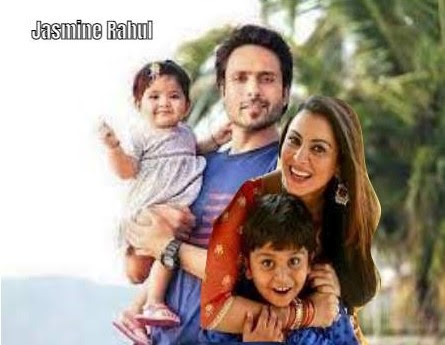 Thank you very much for supporting this SS.Please give a detailed comment on this part.Please write your favourite scenes,fav jodi,favourite character and why you liked that character the most.