Pankhuri: Rubel is there Adi..

Adi: He is really into Payal I guess…

Pankhuri: What about Payal?

Adi: Thats entirely her decision. If he forces or troubles her Ill be the first one to break his jaws

Adi: Then Ill get my friend back from Latika’s evil plans

Pankhuri suddenly silences Adi as Payal steps out. Adi and Pankhuri hide behind the tree and peep to look what’s happening

Meanwhile Payal comes out and stops on seeing Rubel 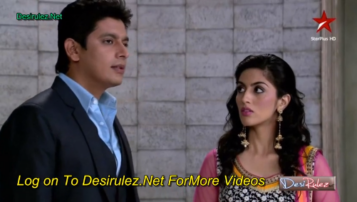 Rubel: Woh,,sorry for coming here..you are always surrounded by Adi and his friend thats why I came here…if you don’t mind can we go for a coffee?

Payal bites her lips in hesitation on thinking about her plan with Adi and Pankhuri. Thats when she remembers Adi telling her about Rubel’s feelings for her

Payal in mind: If I have to sort out my feelings for him I must go for this coffee..only on talking I can sort it out..Adi and Pankhuri will understand me..

She types a message as quick as a lightning and  sends it to Pankhuri and Adi.

Rubel leads the way and Payal follows him still contemplating her feelings for him.

Adi and Pankhuri see this

Adi: She is going with him…

Their phones buzz with Payal’s message

Message: Hey!! Rubel asked for a coffee..in order to understand my feelings for him I have to go on this..if its a negative result I must tell him so that he doesn’t get into it a lot..if it’s positive 😉

Adi: Whats that wink for?

Pankhuri : Now focus on this..I made up my mind to have ice creams and thats cancelled now..my bad luck

Adi: Who said that its cancelled? Im coming and we are having icecream come..

Adi takes Pankhuri with him. The scene freezes.

Jeevika gets to the cafeteria for a break.  She returns after sometime and finds the office in a buzz. She finds Tanya standing near the door with a smirk. 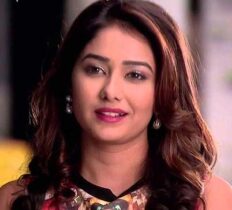 Neha runs to her

Neha: Jeevika see this message it has been sent to all of us

Jeevika sees it and is shocked 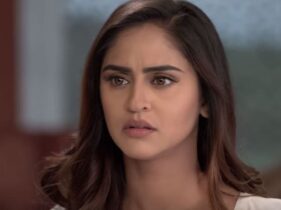 Tanya: Viren’s direct enemy and you are with him..so you are working for him..spying for him right

Viren: You traitor..why are you here? Leave right now

Jeevika is shocked at Viren’s word and his stare

Arjun: Sir she …she…

Viren: She is with my enemy…Arjun..she is a traitor

Arjun: Sir…please dont send her out…she is not with Virat..its just because of her sister’s accident..I enquired about it and it was Virat who saved her sister thats why

Viren: I know that

Arjun: Then why are you sending her out?

Viren: Hey idiot..I did not ask Jeevika to go out..I asked Tanya to

Viren: Tanya is the traitor man..I trusted her and let her in as the intern but she tried to bring downfall to this company by spoiling Jeevika’s presentation..thats why I sent her out..so she is a traitor right..thats why I used the word traitor…even after sending her out she is not stopping her work..followed Jeevika and clicked this picture..if I had not gathered the information already..I would have misunderstood Jeevika and sent her out and lost a valuable employee of our company

Jeevika: Sorry sir..when you asked I should have

Viren: Jeevika..I understand your fear..you may have feared that if you  mention his name I may fire you

Rishabh: Sir you and Arjun know everything?

Viren: My business rival is attacked and you expect me to not know..Now you are going away forever..dont try any other stupid activity

Jeevika to Arjun: How did you know?

Arjun: Arrey Fir has been filed and we were enquired as we are rivals of Virat.

Viren comes to them

Viren: Jeevika police came here and we got to know the involvement of you as you have signed the form for your sister 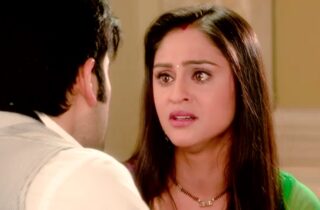 Viren: Arrey no issues..your sister will recover soon. If you need anything you can ask me

Jeevika: Thats so great if you sir

Arjun: Sir who could have done this?

Jeevika: Sorry for talking in the middle sir..when we were at the hospital someone named Karan called Virat and claimed the attack

Viren is shocked at the name . He soon hides it and walks inside

Radhika: This Tanya is worse than I thought

Rishabh: She is much worser yaar

Voices in background: This is the first time Viren sir is favouring a girl this much.
Jeevika is stunned to hear this . The scene freezes

Adi pulls Pankhuri and runs inside

He grabs two icecreams and gives one to her

Adi: Icecreams can beat any stress

They enjoy the icecream. 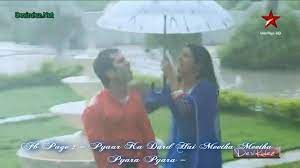 Adi wipes the icecream on the sides of Pankhuri’s lips. They spend few moments and walk out to find themselves in pouring rain. Adi turns to get inside to escape rain but Pankhuri pulls her umbrella out and stops him from leaving.
Maana maine dosti hai,
Kal joh tha aaj bhi hai,
Rasmon ke baad lekin,
Rishta kuch aur bhi hai,
Mera sab hai tumhara….

They hold the umbrella and get lost in each others eyes. Time passes. None of them blink..the air around has something else other than friendship. And here comes a spoiler..Adi’s mobile rings

Adi: Hello
Virat: I gave tracked your location and sent the car. Get home soon
As the call disconnects car stops in front of  them
Adi: Pankhuri Ill drop you home
Pankhuri: Ill manage Adi
Adi: Dont act mad..how will you manage in this rain
He takes her with him
Scene shifts to Deewan Mansion
Adi reaches home after dropping Pankhuri. He is stunned to see everyone in a tensed mood
Adi: Mom..Nanu what happened?
Virat: From tomorrow you are going to college by car..with security guards..no more roaming..just back home after college
Adi: Par kya hua?
Avantika: Another attack attempt by Karan
Adi: On whom?
Purshottam: Its Harvinder now
Adi: Vadhera?
Virat: Haan..he is trying to make it like tit for tat and making him clean. I predict  another attack soon..this time on any of us
Adi : What does he want? Wasnt what his Dadaji did enough?
Purshottam: Kundras wont change..they spoiled our friendship and made it sour, now they are behind our lives
Adi : How is Viren taking this? Does he suspect us?
Virat: You should ask him only
Viren: Then ask me now
All turn to see Viren at the entrance. The scene freezes on their shocked faces.