Hai friends i’m back with another episode. Please bear with delays till Saturday as my viva exams are going on. Lets go to the episode.

Dev lights the candle. Their faces glow in the candle light. 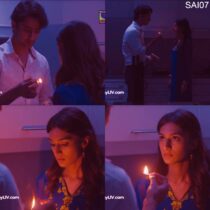 He leads her to the cushion nearby.

They sit down. Dev seems to be restless.

Sona: Mr.Dixit you seem to restless

Sona: Mr. Dixit you can call me Sonakshi..don’t be too formal

Sona: Arrey…ek minute I think I have something

She digs her bag and finds a bar of chocolate.

Sona: Mr.Dixit I don’t run a five star hotel to give you varieties. Sirf ye hai meri paas agar chahiye to le lijiye. Varna no problem I’ll have it myself

Sona: Mr.Dixit decide fast I dont share my chocolates but I don’t want to leave a hungry you and have it myself

Dev: Acha teeke I’ll have it..what else can be done

Sona breaks the bar into two and shares it with Dev.

Sona: Waise Mr.Dixit can I ask you something?

Sona: Auntyji told me and she made me  sit in your place in the havan…

Sona: Is there any reason for not believing

Dev: whatever we are today is due Maa’s hardwork,my sisters’ sacrifice and it may sound like boasting but truth is my hard work

Sona: Arrey its not boasting..its the fact that you did hard work

Dev: Where does God come here? If he had been there he would have heard my prayers and saved papa. But that didn’t happen. Maa doesn’t accept this and she feels that God is her strength. I don’t believe but I don’t ask her not to believe.

Suddenly the wind blows the candle off and thunder strikes too.Dev lights the match stick again to light the candle meanwhile Sona gets scared and holds Dev’s arm. 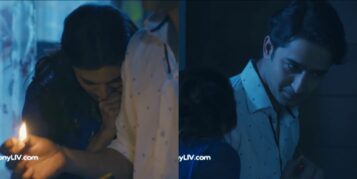 Dev starts laughing..Sona realises what she has done and moves away awkwardly 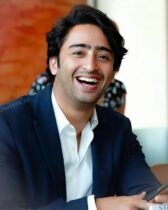 Dev: Sonakshi…the doctor gets afraid of darkness and thunder

Sonakshi: Evvvry human being will have some weakness. My weakness is this..what can I do?

Dev: Sonakshi you look cute when you get scared

Sonakshi: You too look cute while you laugh…but its so rare to seen. On all occasions we met you have smiled once and laughed once. All other times..you are Mr. OBODRO
Dev: Obodro? Sonakshi…what does that mean…wait a minute..is it Bengali?

Sona: Haan…sorry it came in a flow

Dev: You have kept nick name for me (angry tone)

Dev: Look at your face like you have committed a murder..Sonakshi its just a nick name and sounds cute too Mr.Obodro 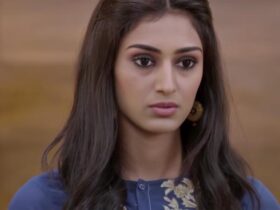 Suddenly the lights come back.

Sona: Thank god..I thought we will have to spend the night in darkness

Dev: I’ll connect the mobile on charger and call the driver to bring the car from home. One at garage can’ be brought back

He calls home and asks for a car.

Sona: Mr. Dixit street lights are on too I’ll take my leave

Dev: Are you kidding? Its pouring with rain you say that you are going in scooty. I’ll drop you Sonakshi

Dev and Sona get into it

The scene shifts to Sona’s room.

She is lying on her bed and switches the fm on 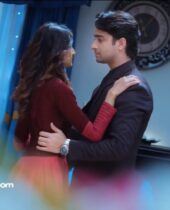 Sona dreams of Dev and herslef dancing to this song 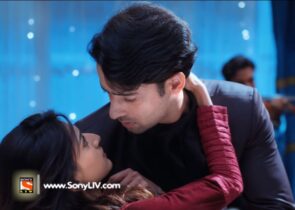 Sona: Arrey Sona…why are you dreaming like this? Have you started to have feelings for Mr.Obodro? it isnt’ wrong we are getting married he is my fiancee why shouldn’t I have feelings for him? What if this marriage is just for his mom? Arrey Sona don’t overthink..Mr..Obodro has feelings he is not a robot..he laughs and smiles too but doesn’t express his feelings outside often..he might not have said through words but his concern was seen in his actions..there is nothing wrong in falling for him..I just wish we both love each other like Maa and Baba.

Meanwhile Dev is in his room. Working on his laptop..he suddenly gets lost into the moments spent with Sonakshi in the darkness

Dev: Sonakshi…isn’t rude and all..she is so sweet…seems like Vicky was right….I was the one rude with her at the hospital..she is so caring..she took care of maa…when I didn’t spend time for Maa’s belief and sit in the havan she sat…maybe she asked about why I don’t believe in God to make up my disbelief with her belief..Maa..you always know what’s best for me..you haveproved it again by choosing Sonakshi as my life partner..she will take care of everything…

PRECAP: SONAKSHI IS ON CLOUD NINE.

HEYS GUYS DO TELL ME YOUR VIEWS ON THIS EPISODE IN THE COMMENTS BELOW. I’LL MEET YOU WITH NEXT EPISODE TOMORROW.