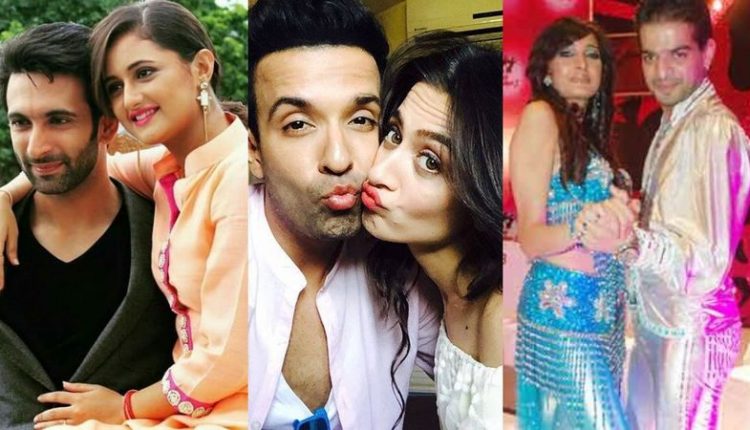 By Swikriti On May 29, 2020
Share
Nach Baliye is a dance reality show which is very close to the hearts of the fans. Real life couples dance their way to the fans’ hearts. The show, which has successfully completed its 9 seasons, ropes in a streak of some popular telly couples to compete with each other for the winner’s trophy and the cash prize. But, hey, call it a jinx or whatever, there’s always been a couple or two who participate in a season and end up parting ways post the show. Well, the list is quite long with names like Rashami Desai – Nandish Sandhu, Sanjeeda Shaikh – Aamir Ali and Karan Patel – Amita Chandekar among several others.
1 – Rashami Desai and Nandish Sandhu
Rashami Desai and Nandish Sandhu, who were one of the most admired couples, had participated in the show’s 7th season. The couple was famous for their stint in Uttaran and their live on Nach was so enticing. Reportedly, troubles in their paradise begun way before joining the show but it appears that Nach Baliye didn’t help them much. They got divorced in the year 2016.
https://www.youtube.com/watch?v=UIL4niemkSY&feature=youtu.be
2 – Karishma Tanna and Upen Patel
Karishma Tanna and Upen Patel’s love story blossomed in the Bigg Boss 8 house and the two were quite inseparable throughout. They participated in Nach Baliye 7 and wowed audiences and judges with their sizzling chemistry. But destiny had something else in store.  In the year 2016, they called it quits due to unknown reasons, leaving all their fans in shock.
https://www.youtube.com/watch?v=yeHAoU1o5HU&feature=youtu.be
3 – Sanjeeda Shaikh and Aamir Ali
Nach Baliye 3’s Sanjeeda Shaikh and Aamir Ali are the most recent ones to join this unfortunate list. The two were among one of the most loved on-screen and off-screen couples, but they parted ways last year. Both Sanjeeda and Aamir have been living separately ever since.
https://www.youtube.com/watch?v=3RJm4SpsdEQ&feature=youtu.be
4 – Mrunal Thakur and Sharad
Mrunal Thakur and her writer beau Sharad were a part of Nach Baliye 7. Throughout the show, Mrunal and Sharad shared the ordeal of their relationship not being accepted by their families due to cultural differences. During the show they were fighting with the world to stay together but something was just not meant to be. They split after the show ended. While Mrunal ended up bagging a couple of Bollywood films, Sharad is far away from ringing the headlines.
https://www.youtube.com/watch?v=hMS775sCguU
5 – Muskaan Ataria and Faisal Khan
Actor and dancer Faisal Khan, who won DID Lil Champs, was seen in the recently-concluded season of Nach Baliye with his model girlfriend Muskaan Kataria. Unfortunately, the duo had to exit the show halfway owing to Faisal’s injury. Soon after, they broke up and Muskaan had accused Faisal of infidelity that is, cheating on her with his elder co-star.
6 – Charlie and Kuwar Amar
Kuwar Amar and Charlie had fallen in love on the sets of their TV show. They were participants of Nach Baliye 5 and the youngest ones. They, too, parted ways after the show and it is being speculated that aren’t on talking terms anymore.
7 – Karan Patel and Amita Chandekar
TV actor Karan Patel, before getting settled with Ankita Bhargava, was linked to several ladies. Amita Chandekar was among one of his ex-girlfriends and they were a part of Nach Baliye 3. The two broke up soon after the reality show ended. At present, Karan and Ankita are proud parents to a baby girl.

8 – Dalljiet Kaur and Shaleen Bhanot
Dalljiet Kaur and Shaleen Bhanot, who participated and won in Nach Baliye 4, had an ugly separation. Reportedly, Dalljiet had accused Shaleen of domestic violence and it only got worse. The two, however, have now moved on in their respective lives. In fact, the actress was recently seen in Bigg Boss 13.
Like 0 Dislike 0
Share FacebookTwitterGoogle+ReddItWhatsAppPinterestEmail

Rashami Desai talks about being OUSTED from Naagin 4