Unmasked ~The Prince Of Lanka

~Never whine~
~Never Complain~
~And never try to justify yourself~

Here was Amravati, the capital of Indra. Indra the ruler of  heaven, and the King of all gods. He was the god of thunder, with Sanchi as his wife and Queen he ruled the three worlds. This fame and power had gone on his head and it was the time of his downfall so that he could learn to respect what he got, which could only be done by a mighty warrior who could show Indra his true place. And the name of the warrior was…………………………….MEGHNATH.

Meghnath was the son of Raavan, the mighty Raavan. He had conqured kingdoms after kingdoms for his father, and had managed to achieve his father’s respect, as his favourite son. He was a good elder brother to Atikay and Akshay, a loyal son to his mother, Mandhodari and at a point of he was also the favourite nephew of  his bua, Surphnakha.

‘Bring him in, let me handle this kid myself, I will  punish him for his deeds, his father is already with me’ said the mighty Indra. Meghnath hung his head and faced towards the floor of  Vaijayanta (Indra’s palace). Indra had not been well prepared for this was but he knew he was great so he won it. He had already captured Raavan, who was in his prison and easily without much battle made Meghnath also his prisoner. He had been taken to the court directly after being captured. ‘What’s your name lad?’.

‘I am Meghnath’ he replied with full confidence in his voice. ‘You do not look like that you are afraid of us, you think gods are too good to punish you?’ Indra’s voice boomed.

‘Um…I kind of thought that, by the way, I must complement your wife she is beautiful, I mean look how beauutiful she looks in these clothes next to you now and who knows what happens the moment…………..’ Meghnath remarked with a smirk refering to Sanchi sitting beside him, he thought that she was no better than a ordinary woman, he had imagined the Queen of the three world to be the most beautiful, but he was disappointed.

‘Kid!’, Indra shouted, ‘control your words, know whom you are speaking to’ Indra shouted. Meghnath just shrugged at this. ‘I will try’. 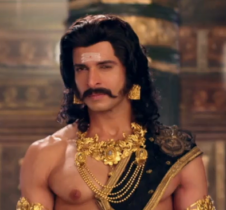 ‘Put him in chains and go throw him in the jail’. The guards tied chains round his body and hands, but strangely Meghnath didn’t protest, he just let them do it. As they were taking him down to the prison, he managed to take out a little ball which was hidden in his garments and let the ball drop on the floor, it created immense amount of smoke, which was hardely bearable by anyone, he with his techniques got rid of the chains and disappeared with the smoke.

‘He fled, he disappeared in the thin air, I saw him doing that, he used his sorcery skills’ shouted one of the guards, Indra was still coughing due to the smoke.

As Meghnath reached out of the palace he was smirking thinking about the words the guard had just said before he left ‘he used sorcery’. ‘Sorcery really? that’s so out of date, only if they knew all this was called science, but if they knew it then would be the difference between him and them. He was now advancing towards the prisons where his father was kept. He did a deep survey about this whole place, so that it would be easy for him to locate places when he would reach here. But he could not openly go like this, if anyone would see him then he would have to do the whole thing again. And he did not have this much time to loose, his father was suffering and he had to help him anyhow.

He grabbed a soilder nearby and pulled him down, wore clothes like him and went ahead like that. He still could not go freely, he had to make sure not to arouse any suspictions of the other guards there. He reached in front of the prisons, but his father was kept in the deepest one and if he went straight then he would be asked many questions. So for this he had already thought of a plan.