Heyy guys, thanks for all the support from the previous episode! I’m glad ya’ll are liking my FF. Please keep commenting and supporting in the comments section.

It’s finally my golden jubilee!! 🥳 and my 100th post celebrating it together. 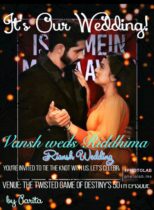 The priest entered in the decorated ArKaRi mansion, heading towards the mandap that was set right in the middle of the hall. Giving the muharat of the wedding he started preparing for the rituals that were to be taking place during the wedding. While all the other arrangements were taken care of by the helpers around the mansion, Aryan, Kabir and Rivan were spending time with Riddhima in her room.

Aryan: It’s your last day Riddhu here (emotional) We got you after a long time and again we have to let you go.

Rivan: Mamu why be emotional….she’s just a few streets away, in VR mansion. You can come there anytime to meet her right.

Kabir: Yea but still Rivan, she’ll be going to her in-laws!

Riddhima: Bhai since when have you started thinking like that….so what if I’m going to my in-laws, does that mean I won’t belong to the Raichand household?

Aryan: Not at all!

Riddhima: Then Bhai, you can come anytime! In fact I’ll come anytime! (laughing) And Bhai I’ve gotten married before as well, this isn’t my first time.

Aryan: But it’s the first for us right….Riddhu I’m sorry

Riddhima: For what bhai?

Aryan: We never listened to you and played with your feelings pretending to accept your relation with Vansh. (guilty)

Kabir: Yea Riddhu, we were blinded with our revenge and rivalry that we couldn’t see your happiness and love.

Riddhima: Bhai why remember the past, forget it! And Bhai I knew from the time I actually left.

Riddhima: By the way Bhai I’m getting married the second time, I also have my kids but where are your brides?

Aryan: I had but even she left me….i guess I’ll remain a bachelor!

Ridhvanbir: What!! You had one!!

Aryan: Yea but we broke up, after that I never had any other thought of marrying.

Rivan: Mamu you better hurry up, time and age are running! (giggling)

Aryan: are you trying to say that we’re getting old? (raising his eyebrow)

Kabir: Bhai he said you not me! I’m still young and dashing! (flaunting)

Rivan: I included you too Mamu! (chuckling) You both to be precise!

Aryan: Anyway, Riddhu your lehenga is on the couch, quickly get ready, the make-up artists are here as well.

Aryan took Kabir and Rivan out while they headed for their own room to get ready. On the other hand in VR mansion everyone was walking hither and thither preparing for the vargohro (procession/baraat). Everyone were ready in their baby pink and peach outfits for the main day. Vansh who was in his room, sitting opposite the mirror in his dhoti kurta. He wore his brooch and got up while Riva who was dressed in a beautiful light pink lehenga choli came with his sehera. She signalled him to bow down a bit so she could reach to his head. She neatly tied the sehera on his head, covering his hair. She clipped another brooch in his turban and straightened his sherwani from the collar proudly.

She hugged him and he reciprocated back. He kissed her forehead and held her hand as she led the groom to the hall where the family members waited. They both descended and took the blessings of dadi and they all went to the VR gate. There was a horse waiting for the groom, the horse was also decorated with an umbrella to prevent the scorching sun to melt Vansh.

Surrounding the horse were the band players, who were ready to play their tunes with the drums and trumpets. Before Vansh got on to the horse dadi took some money and roamed it around his head.

“Najar utari lidhi Vansh ni” is what she said. (She protected him from an evil eye). He sat on the horse while the rest sat in the car following him, the var raja (groom) They reached till a point near the ArKaRi Mansion when they all got of the car and went to the Var raja with the music playing. They all danced leading the varghoro to proceed towards the house.

Riddhima who had worn her panetar saree; the gujarati bridal wear was ready with her make-up and jewelry. She sat in front of the mirror, smiling at the thought of once again reuniting with her love and family. The panetar sarees were mostly white, red and green in colour. She had beautiful earrings and necklaces to go with her outfit. Her bangles clinked as she mover her hands. She soon heard the loud music approaching their mansion and she blushed.

Aryan and Kabir who were ready and waiting for the varghoro at the entrance also started dancing hearing the music. A few other close relatives were present during the wedding. A gujarati wedding has small games like pulling the nose of the son-in-law and also grabbing the mother-in-law’s saree veil playfully, however here they just welcomed him with an aarti. The entered the wedding dais and Riva escorted Vansh to the dais.

Riddhima came down with Rivan on her side, she looked ravishing and yet traditionally beautiful. Rivan wore a baby pink sherwani.

Vansh couldn’t take his eyes off her and followed her till she came and stood beside him in the mandap. The pandit recited a few mantras and they were handed jaymalas; a huge necklace made out of flowers and they exchanged them, promising each other to be united with each other. They soon sat down on the chairs that were placed for them. Aryan came with a bowl that had yogurt and honey and offered it to Vansh. Dadi being the head and a mother figure to Vansh came with the mangalsutra. Aryan and Kabir performed the kanya pratigrahan (kanyadaan or the handing of the daughter to groom) in place of their father. They took Riddhima’s hand and gave it to Vansh. Vansh held it tight. Riddhima felt extremely happy having to have lived the feeling to become Mrs Vansh Rai Singhania once again. Soon then the priest lighted up the havan and started reciting the mantras for their wedding and promises to each other. Aryan gave a handful to rice in Riddhima’s and Vansh hand which they threw in the fire performing the ritual called rajaham.

It was finally time for their gathbandhan. Their scarfs and chunni were tied together in a tight knot representing their bond. They started their saptapadhi (the seven rounds) where Vansh took 4 rounds and Riddhima took 3 rounds each time promising different vows. The first step is for respect and honor towards each other, the second for strength to weather their problems together, the third for prosperity for their household, the fourth for wisdom, the fifth for children, the sixth for health, and the seventh for affection and a lasting companionship.

Vansh made her wear the mangalsutra and adorned her hairline with sindoor. The pandit therefore announced them as var bairi (husband and wife) and they took ashirvada from the elders, dadi and Aryan and Kabir. They all congratulated them and the twins out of happiness danced heartily. Vansh and Riddhima hugged each other congratulating themselves.

It was time for the vidaai, where Riddhima got a bit emotional while stepping out of her house, leaving her brothers, but she knew that they were always there for her and would meet them the next day. They sat in the car and left for VR mansion. Ishani and Siya prepared everything for the grahpravesh of the bride (first steps of the bride). They finished it and they entered.

Lagna thay gaya!! (they are married)

Riansh were finally tied together once again, a bond never to broken. They surpassed and won all the twisted games that destiny brought for them.

Don’t worry it’s not the END! Well I thought of making it to end but then I thought and said let me write a bit more. What worries is me that this FF isn’t getting a good number of comments anymore, so maybe I might wrap up this ff much earlier than I had planned.

But what if destiny disagrees with their win and brings more hurdles?

I hope you enjoyed reading the episode. The more the response the earlier I will post 😜 Please let me know how you found it in the comments section.