Mehek was relaxing near the pool side.
Suddenly somebody pushed her into the pool.
She started screaming.

Mehek started drowning in the pool as she did’nt know swimming.

Shaurya heard her scream as he was near by.He jumped into the pool and got hold of her. 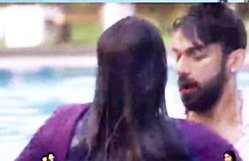 He carried her in his arms. 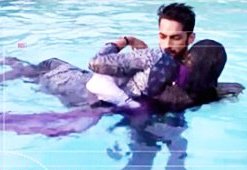 Unknowingly their noses rubbed with each other’s. 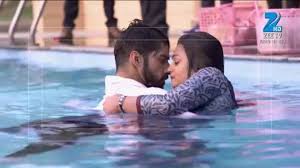 Their eyes got locked. 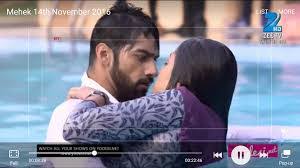 He got out of the pool carrying her.
Shaurya:Why did you jump into the pool when you don’t know swimming?
Mehek:I did’nt jump Shaurya.Somebody pushed me to the pool.
Shaurya was shocked:What?Who pushed you?
Mehek:I don’t know Shaurya.I felt that somebody wants to kill me.
Shaurya:Why should somebody kill you?The people here do not even know you.So there is no question about enmity.
Mehek:That’s what I also cannot understand.Why should somebody push me to the pool?
Shaurya:Anyways you don’t tell this to others.They may think that evil spirit tried to kill you and will spoil our trip.
Mehek:Ok.But by the way how did you know that I am in the pool?
Shaurya:I heard you scream.
Mehek:Why only you heard it and others did’nt hear me?
Shaurya:So many doubts you have!I was coming towards the pool.That time only I heard you scream.Now go change your wet clothes.
Mehek:Ok.

All were in deep sleep.Aditya walked to the terrace making sure that all are asleep.
He saw Aliya there.
Aditya:I doubted whether you will come.
Aliya:I was hesitant to come as our friends may catch us red handed.But since you called me specially I came.
Aditya smiled and pulled her closer.
Aliya blushed:Leave me Aditya.If any of our friends comes here…
Aditya:Don’t worry.I made sure that all are asleep before coming here.
She smiled. 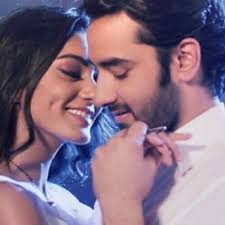 Aliya:But Aditya…did’nt your dad warn you to not cross the border?
Aditya:Yes.But I am not an obedient son to obey him.
They both laughed. 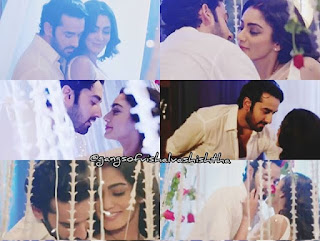 Aditya came on top of Aliya.

Suddenly Aliya pushed him down and came on top of him.
Aliya:I want to dominate you.
Aditya smirked:You are wild animal and I love you that way.Waiting for your wildness to begin.
She blushed and leaned towards her neck.
She started nuzzling his neck.He closed his eyes feeling burning passion.

Without his knowledge her face turned scary and sharp teeth grew out. 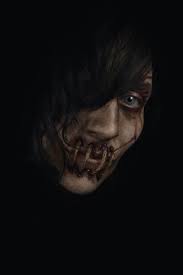 She bit his neck.Without even able to cry he died.
She smirked:Fool!He thought that I am his Aliya.But the real Aliya is sleeping peacefully.
She blew air at him and his body flew away.

They all searched for Aditya.Suddenly Drishti saw a letter on the table.
She took it and opened it.
Drishti:Aditya has written a letter.
Aliya looked at her with hope.
Aliya:What’s written there?
Drishti read out the letter:My dear friends…I really saw a ghost in this place.But no one believed me.But my life is the most important to me.So to protect myself I am leaving.Sorry guys.If I had told you before leaving,you guys would have not have allowed me to go and would have made fun of me.That’s why I am leaving without informing you all.
Asad:This Aditya is stupid.Even I faced some supernatural force here.Whether it was a ghost or some other force I did’nt accept my defeat.
Zoya:Because you are over confident Asad. 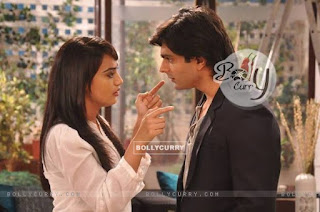 Asad:Whatever!I made sure that I will not let myself surrender to any evil force.But here Aditya just ran away in fear.
Rakshit:Asad is right.This Aditya’s stupid fear and superstition.Let him go.But we all should enjoy the vacation.
Alekha:Yes,we should enjoy maximum.Yug..hope you are not scared like your stupid brother.
Yug:No way.I am not going to sacrifice my joyful vacation here for any invisible ghost.
Alekha smiled. Rakshit and Asad smiled.
Zoya:I think you are right Asad.Why should the innocent people like us surrender to the evil spirits?We have not done anything wrong.We should fight against them boldly if they trouble us instead of trying to run away from them.
Asad:Exactly.Now you got my point Zoya.
Zoya:Ya.
Mehek whispered to Shaurya:What if that unknown person tried to attack Aditya also and that’s why he ran away?
Shaurya:Mehek,why should that unknown person kill you and Aditya?Aditya left because he is scared of seeing some scary eyes.That was the effect of drinks on him.I think Aliya also drank along with him,so she also hallucinated shining eyes in the darkness…or she and he saw some cat’s eyes.The ghost is inside the room.So there can’t be any ghost here.And no chance of any killer as no one has any advantage of killing you and Aditya.
Mehek:I don’t know..my mind is restless after the pool incident.
Shaurya caressed her:Everything will be alright.
Mehek nodded. 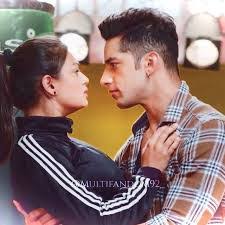 Sonakshi was pasting jam and butter on the bread.Suddenly she heard a strange sound and got scared.
Sona:Ahhh….
Rohit came inside.
Sona:Rohit..I heard a scary sound now.I am worried whether ….
Rohit:Whether it is a ghost?
Sonakshi was silent.
Rohit held her closer and consoled her:Don’t be scared Sona.There is nothing to be scared of. 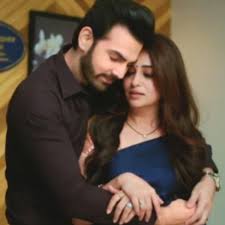 You know what?Actually for a fun I only made that sound to scare you.
Sonakshi looked at him with disbelief:Rohit…you?
Rohit started giggling:As I expected you got scared.It was so funny.
Sona:Youuuuuuu…it was a bad joke Rohit.You really scared me.
Sonakshi started throwing fruits at him.
Rohit:Hey..Sona…no…
Sona:You deserve it Rohit.
She kept throwing fruits at him.
Finally they both ended up laughing.
Then they took the bread and shared it with each other.They fed the bread slice to each other.

Zoya was in the Palace Garden.Asad went near her.
Asad:You beieve that evil spirits are roaming about the place.Then are you not scared to stand here at night?
Zoya:Actually the beauty of this palace made me forget all the tensions.I am enjoying this garden in this moonlight.
Asad:Ok.Enjoy.
He began to leave.Suddenly she held his hand.
Zoya:Be with me Asad.I want to be with you.
He looked at her smiling and embraced her.
He whispered:I never had any intention to leave you Zoya.I just turned back.Even I want to be with you. 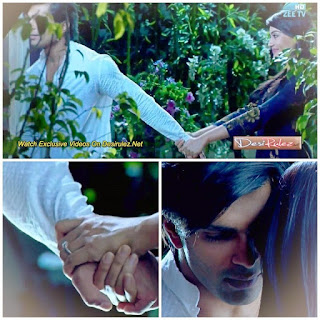 A spirit entered Alekha’s body and she went to Yug’s room at night.She woke him up.Yug woke up.
Yug:What’s the matter Alekha?Why are you here this time?
Alekha caressed his face sensually.
Yug was stunned:Alekha..what are you doing?Why are you behaving like this?
Yug moved away pushing her softly.
Alekha:Let us love each other for some time Yug.

She caressed his face.
She pushed him to the bed and leaned towards his neck.
Yug:Alekha…this is not right.
Alekha:This is right.
Suddenly her teeth grew bigger and sharper.Yug was not able to see her face as she was facing her face against his neck. She bit his neck and sucked his blood.He fell down dead.she turned into a scary ghost with shining eyes. 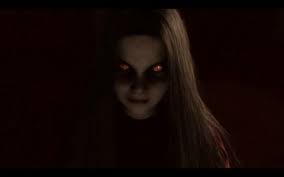 Then she turned into Alekha again.Yug’s body got vanished.
Alekha went back to her room and slept on the bed while the spirit left her body.

All were worried that Yug was missing.
Asad rang up Ishita:Aunty…this is Asad.Is Yug there? 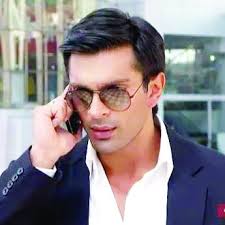 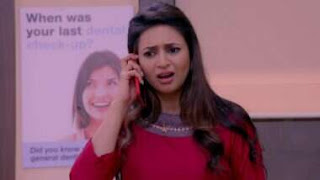 Asad was shocked.
Asad:Yes.actually I forgot to fool you on April 1st.So I rang you up to fool you today.
Ishita smiled:Naughty boy.You are naughtier than my sons.
Asad smiled fakely.
He cut the call.
Asad:Both Yug and Aditya are not at their house.
All are shocked.
Drishti:Aditya left.Now Yug also left without even leaving us a note.But both have not reached home.Something is mysterious.
All were upset.Aliya and Alekha were crying.
Rakshit:Drishti…there is nothing so mysterious.You know how these 2 mischievous brothers are.They are adventerous.Don’t you remember that during the college days too they had bunked classes and went for an adventurous trip.
Zoya:That’s right.They have done it many times.
Alekha:But Yug was enjoying a lot here.Why should he leave without informing us?
Rohit:May be because Aditya must have rung up Yug and brainwashed him to join him.Because of Aditya,Yug left secretly.
Sonakshi:Could be possible as Yug is an obedient brother to Aditya. 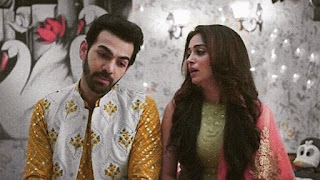 Karan:Ya..that’s true.
Drishti went away.Rakshit followed her.
Rakshit:Drishti…
Drishti:Rakshit…I don’t know why ..my mind says that there is something which we don’t know about Aditya and Yug leaving us.
Rakshit:Aditya had written a letter.And Yug…you know how he is always after Aditya.
Drishti:But something is missing somewhere.
Rakshit:Nothing like that Drishti.Chill. 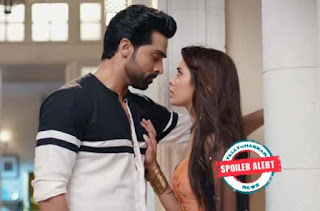 Rakshit thought:I have to do something to make her mood alright.

Rakshit took Drishti to the near by restaurant.
Drishti:Rakshit..why are we here?
Rakshit:Oh Drishti..don’t you know that people come here to have food.
Drishti:But why have we come here alone leaving our friends in the palace?
Rakshit:Because we are on our date.
Drishti smiled.
They sat there and ordered the dishes they want.
2 scary eyes were watching them. 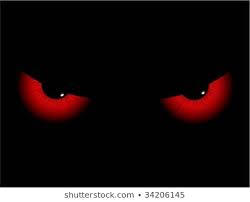 The waiter served them food.Drishti looked at the plate to eat.
She was shocked to see a dead chicken on the plate. 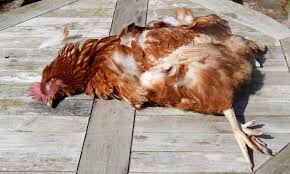 She screamed.
Rakshit was shocked while all were looking at her.
Rakshit:What happened Drishti?
Drishti:Rakshit…dead chicken…
Rakshit looked at the plate.He could see chicken fry on the plate.
Rakshit:Drishti..relax.This chicken is not alive.That’s why it has been fried for us to eat.
Drishti:This is not chicken fry Rakshit.Open your eyes and see.This is a chicken which is dead a few minutes back.
Rakshit was shocked.
Rakshit:Why are you hallucinating Drishti?This is chicken fry which is your favourite.Look at it properly.
She looked at the plate again and saw chicken fry there.She could not believe her eyes.
Drishti:Then why did I see something else before?What is happening to me?
Rakshit:Because you are thinking of unnecessary things.Leave it Drishti and eat food peacefully.
Drishti:I don’t want to eat chicken fry Rakshit. I am reminded of that dead chicken.
Rakshit:But it is your favourite and you ordered it for yourself.
Drishti:But right now I can’t eat it Rakshit.I feel like vomiting when I see it.
Rakshit:Ok..eat only which you need. 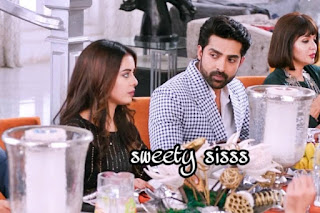 Rakshit removed chicken fry from her plate and they started eating their food.
The owner of those scary eyes murmured:Now eat peacefully.But very soon you will have the fate of this chicken.You will be dead and fried like this chicken.