Scene 1
sanyu say I have to ask for my right from you people. dadi says you have a lot of courage that you came here to talk about all this. What you thought Samir is letting you study you will do anything then. Even Agarwal can’t help you in this. Wife’s everything belongs to husband automatically.
She says you know everything if husband belongs to wife. You should not follow these new rules. Don’t ever say that again but you will come here when you get married. We don’t need your money. His dad says we are doing this for you and you are so selfish. His mom says should I bring you the car so you can go back?

Sanyu goes to college and says in heart why should Samir get whats mine. She was right papa will never support me in this. She swipes her tears. Randhir comes there. SAnyu asks what happened? he is quite. He sits there sanyu sits with him and says tell me what happened? Randhir looks at her and asks why were you crying? She says no I wasn’t. He says I saw you. Sanyu says I never felt this helpless and alone before. She places her hand on his forehead. 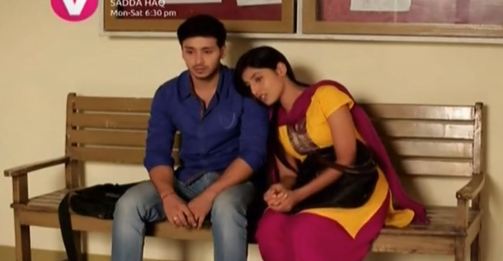 Samir is very angry to know that sanyu came his home. He says I will call her dad. His dad says Agarwal has to end this all now. Dadi says yeah we should break their ego and specially of sanyu.

Scene 2
Next morning sanyu wakes up and thinks why Samir hasn’t called him. He must have been told about all that. Harsh calls Randhir and asks could you arrange money? He says no I tried. Harsh says I will prove that woman wrong. Kunal will send you a mail in a moment. Randhir gets the mail, it has renuka’s pictures with man Radnhir saw in office.

SAmir and his family reach Agarwal house. SAmir’s mom says you have no taught any manners to your daughter. Mital says you are deceiving us. MRs mital says you should know what a girl should react like. Mital says she did wrong signature on forms and she came to our home and asked for her right. She doesn’t have any trust on us. Mital says we are stuck with people like you. Samir says we can rectify our mistake. SAmir says he is right people will blame you when our engagement will break. No one will ask me. Whenever I call her she is always out. Agarwal says I am really sorry I will call sanyu and talk to her. Mital says you ruined everything already. Agarwal says I will rectify everything give me some time. Mital says I am giving you one day. Sammir says we care about you that’s why we came here otherwise dad could have called you. They leave. Anju says how dare sanyu to go to her in alws. Ankit says she never agreed on her mistakes. Anju says I always apologized her but look what she has done. Ankit says I will break her bones. Agarwal says no one will say anything to sanyu. Ankit says but she signed the papers wrongs. Agarwal says if she doesn’t want the factory to be named after anyone else then there must be a reason. I will handle It.

Randhir goes to his mom’s cabin. Her PA says sir please you don’t have right to rummage her cabin like this. Please go out. Randhir says where Is that man? PA says he is in a meeting I can’t provide you details. Randhir sees a paper and calls renuka. He asks where are you? She says I am in ,meeting. I will talk to you later. SAmir says I will talk to you in court now.

Sanyu is worried. Parth comes to her and asks what is the problem? He says you can share it. sanyu says you won’t understand. He says then tell randhir. You will feel better. SAnyu says he won’t understand either. parth says he will, at least he will listen.

Scene 3
Vidushi comes in. some guys are taunting in her about her video. They say that’s what shoe does and hook up with guys. sHe got that love bite look. Vidushi says what are you saying? My bf gave me this love bite. Whats your problem. he says who bf? Who never calls you his gf. parth comes there and holds her from the back and says where were you I was looking for you. He takes her from there. the guys are shocked. 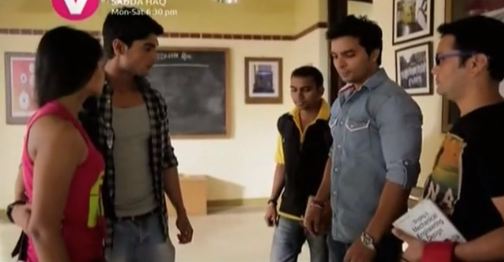 Parth says why you do this? Why you show off. I save you every time due to friendship and humanity but I can’t do this all time. You have to control yourself.

SAnyu calls Randhir. She is in tears. He asks what? Sanyu says nothing. Randhir says why the people close to us hurt us. Sanyu says I don’t know. He says you have hurt me too. You should know. Sanyu says you always hurt me. Randhir says I used to consider you my right. He says I guess love means being hurt. SAnyu says the pain. Randhir says accepting the pain and that some things ill never be together. SAnyu says like us. We can’t ever be together even though we understand each other. Randhir says we were never meant to be. They are both in tears. They recalls their moments. Song ‘dooriya’ plays in background. They are both crying. SAnyu is sobbing. 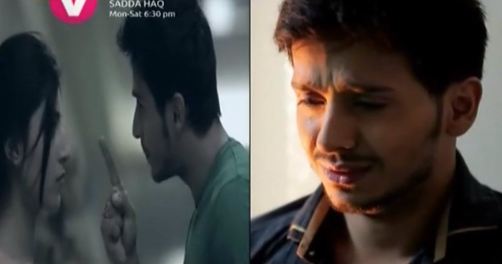 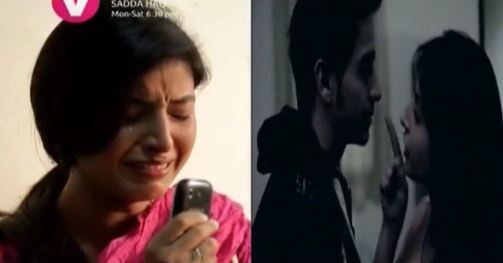 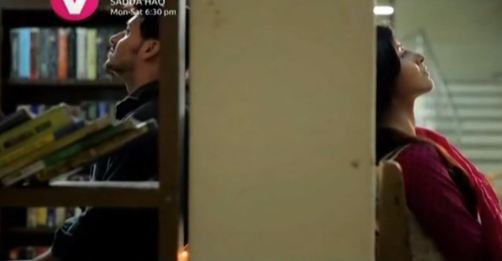 Precap-Sanyu says to Samir what haoppened? He says you made many mistakes and I saved you so many time. Don’t think to call home. Ankit says to anju she called and said she wants to talk to you. anju says I will not forgive you sanyu. SAnyu tries to call Samir but he doesn’t talk. sanyu break her phone in anger.