Randhir is destroying his robo-car. YoYo tries to stop him, but Randhir says it’s useless, it’s a loser. He then realizes, not car, but its parts can be useful for someone. He leaves. YoYo says Parth was right.

YoYo informs the team. Parth comes and says he said they are taking a huge risk. He gives the team some extra parts. All now start praising him. He asks if they shall work on the car now. They start fixing it, but Parth says seems like engine broke down. Randhir comes back with his car working fine. He says he found flaws by breaking it, and now he fixed all of them, so his car is unbeatable. Sanyu says in her mind, good job. She tells the team they don’t need to fix their car now, they got the car which will take part in the competition.

LITS has beaten MITE, so now FITE will face LITS in the final. There will be 3 rounds and winner will be based on best of three. LITS mentor tells Vardhan LITS beat MITE like that and FITE struggled to win against them which proves which team is the best. She doesn’t know why the competition is taking place. Vardhan tells her they shall see. LITS mentor calls FITE team of jokers, but Vardhan keeps his cool and replies back to her.

Sanyu asks the team to decide who will handle the remote. Randhir says, whatever it is, she won’t go first. She asks why? He surprises everyone saying they have to save best for last. Parth and Vidushi enter first. Parth tells Vidushi to have patience, but Vidushi blows it up. She can’t follow Parth’s directions and they lose first round. Parth yells at her, but she says before she could understand the controls, they attacked. He tells her they won’t play 2nd round now. It’s better if someone who knows controls plays it.

Randhir and Sanyu come next from FITE side. Randhir wants to go offensive, but Sanyu says defense would be better. Both argue and in the mean time, LITS boys attack their car. Randhir tells her to follow what he says now. LITS boys say they have no team coordination. Randhir and Sanyu keep arguing. Sanyu doesn’t listen to him and their car keeps getting hit by LITS. Sanyu tells Randhir, they will have to make their weakness, their strong point. They think they have no coordination. She agrees, but keeps arguing. On the last moment, they both agree with a move which makes FITE win. LITS mentor goes to them and asks what the hell are they doing. LITS captain says what they could do, FITS team kept doing left right, left right.

Now it’s time for the final round. PK announces to make it more interesting, there will be no rules, whichever car manages to stay inside the boundary will be winner. LITS team seems to be happy with this change. Sanyu and Randhir again starts arguing in left or right. Sanyu says she’s trying what he’s saying, but seems like a part has broken in the car. He tells her she’ll need to study the direction and floor. They seem to have figured out how to control the car. LITS captain tells his partner, they will use same tactic as Randhir and Sanyu of left and right. Sanyu hears it and tells Randhir they are such losers.

Sanyu and Randhir almost push LITS car out, but LITS bring it back. The fight continues. Sanyu and Randhir again attack on LITS car and it falls out of the boundary line. FITE wins. All celebrate. Sanyu and Randhir hug in joy. Sahil tells LITS team that they were speaking too much, what happened now. Vardhan looks at LITS mentor. She goes to her team and says she hates losers and she hates losing. She leaves. Vardhan gets up and says both team played good. And after this tough competition, he decides to have a get-together. Sanyu goes to him. He tells her not to expect him to congratulate her. It should be her who should have arranged a get-together, but he has to do it on her behalf. He leaves. 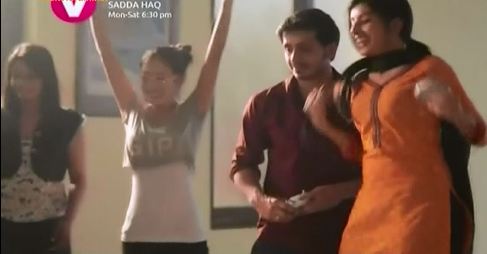 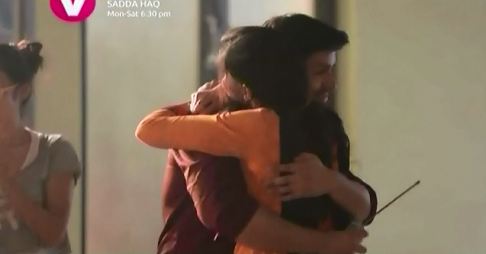 LITS boys are getting ready for the get-together and some of them are planning to impress Sanyu. Their captain comes and reminds them that if they lose another round, they will be out of the competition. They are just going to the get-together to pay Sanyu back. He shows something which they will mix in Sanyu’s juice so she can’t participate tomorrow. The captain tells them, they can hit their chance on her, but make sure that thing goes in her drink.

Both teams have gathered for the get-together. Vardhan comes and says to forget their competition, they are representing engineers today. He tells them to enjoy themselves, but LITS boys say they are used of competing and why not a competition here as well. They suggest of dancing on the paper and as Vardhan wants both teams to know each other, LITS boys will partner up with FITE girls. Sanyu interrupts and asks how that will be competition then. She says they will partner up with people in their teams. She by mistake picks Randhir’s friend for her partner.

Vardhan tells them to have fun and he’ll leave now. He tells LITS mentor that she doesn’t seem to be enjoying either, so shall he drop her to her room. She asks if his team will be able to survive with his boys. Vardhan says he knows his team. They leave.

Sanyu says they will dance without shoes and whoever loses will put the shoes in winners’ feet. LITS boys accept the challenge. Randhir asks Sanyu what she thinks of herself. She asks what happened, he keeps saying that he’s a topper. Randhir says he can’t do this. YoYo’s boys come and say they will monitor this competition. They bring papers. Sanyu and Randhir are partners as she picked out his hand. LITS boys get ready to dance with each other. One says what they thought they will do and what they have to do now. Other says he feels awkward too, but once they win, it would be all okay.

The competition is about to start. Randhir and Sanyu get on the paper and look at each other. Vidushi and Sahil are other partners who represent FITE. Vidushi looks at Parth, but he’s sitting on a side. Randhir is hesitating to go closer to Sanyu. She starts dancing. He asks her if she had to choose him only for this stupid competition. She says she meant to pick Kastuki’s hand, but God knows how he came in between. He reminds her that she picked his hand and asks her not to embarrass him by dancing like a joker. She says he’s saying as if he’s Michael Jackson. The music change and papers get shortened. Vidushi continues looking at Parth. She pushes Sahil and asks why he’s going so closer. They are out. Papers get more shortened. Randhir and Sanyu get closer. Both have an eyelock.

Precap: LITS boys mix something in juice. Some of LITS boys then stop Sanyu to congratulate her. They suggest for a new beginning and hand over the glass of juice to her. She says thank you and is about to drink it.