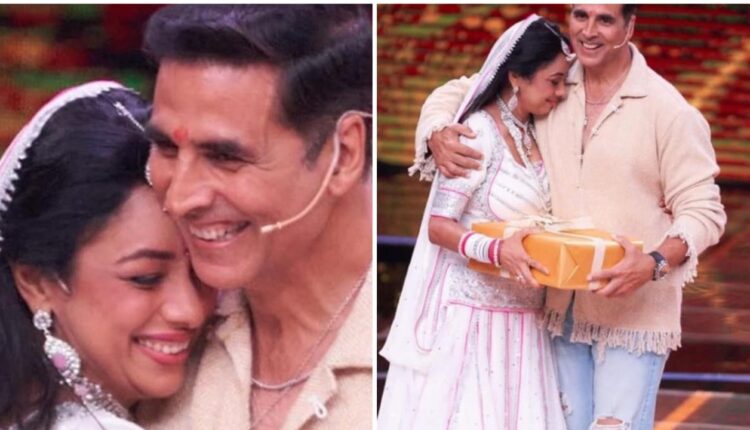 ‘Ravivaar with Star Parivaar’ is celebrating Akshay Kumar’s new film ‘Raksha Bandhan’. The show witnessed the presence of Bollywood’s Khiladi. Actress Rupali Ganguly, aka ‘Anupama’ reconnected with Akshay Kumar after a long time and revealed her special bond with him.

Very few know that Rupali shares a very old and strong bond with Akshay Kumar. She met him through her father, who was a producer and always praised Akshay for his dedication to his craft.

Rupali Ganguly talked about the day when she first met Akshay and shared, “Akshay is family to us. My father signed him on in his early days, and that’s how we came to know him. When we met him we were pleasantly surprised, and I remember my father saying that this person is made for stardom. Akshay is so punctual, hard-working, and such a down-to-earth person. When we used to go outdoors for Papa’s films, I remember Akshay used to wake up early in the morning at 4 am and work out. My father is very proud of him, and always fond of him. So, because of my father, Akshay Kumar became very close to me, and I started tying ‘Rakhi’ to him. The friendship that had been lost for almost 30 years has now been rekindled due to ‘Ravivaar with Star Parivaar’.”

Rupali also talked about the director of the movie Anand L. Rai, and said, “I am very grateful to Anand L. Rai sir, director of ‘Raksha Bandhan’, for giving my brother, Vijay Ganguly, a chance to be a part of such a big film. He won the IIFA Award 2022 for ‘best choreographer’. Anand Sir is a huge part of our lives, and a huge respect to him. So, the film ‘Raksha Bandhan’ is very special to me, and I urge you to go watch the film.”