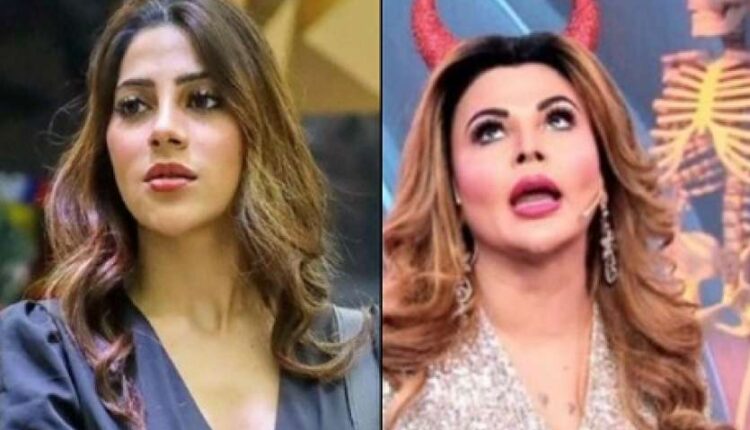 Nikki Tamboli’s mother REACTS to her fights with Rakhi Sawant

By Swikriti On Dec 19, 2020
Share
Nikki Tamboli is a contestant who has made a soft corner for herself in the hearts of the fans of Bigg Boss. Recently she had a fight with Rakhi Sawant and it has irked her fans. Not just her, but Nikki’s mother too reacted strongly to Rakhi’s behavior. Very frequently we can see we could see her being targeted by the Ex contestants Rakhi Sawant, Arshi Khan, and Kashmera Shah. When a leading entertainment portal got in touch with her mother, she how one can fathom just how much she is broken because of the behaviour towards her and she felt bad when she saw her like that. She also went on to reveal how people asked her if she is actually quitting the show and that she must not do it.
Talking about her fight with Rakhi, she said,” I am feeling extremely disturbed by the way a few of the contestants like Rakhi Sawant, Arshi Khan, and Kashmera Shah are treating her. She is being mentally harassed by them. It is difficult for a person to take so many things alone. We all witnessed how Vikas Gupta lost his cool on Arshi and threw her in the pool because of which he had to leave the show. My daughter is strong but at the end of the day, she is a human being and getting mentally tortured by them. “
About Nikki’s fight with Kashmera, she said,” I felt really bad the way these three girls, Kashmera, Rakhi, and Arshi cornered her in the task and didn’t allow her to play. Also, Kashmera went on to slap her, biting her, and held her legs so tight that she could have fallen down on her face. Thankfully Rubina was there to hold her. She was continuously saying usne mujhe laat maari but laat marna to chhod vo hil bhi nahi paa rahi thi. But the worst part was Rakhi was abusing her and the people present there were laughing. I felt like she was treated like an animal who is caged and people are getting themselves entertained by mistreating her.
Are you a Nikki Tamboli fan?
Share FacebookTwitterGoogle+ReddItWhatsAppPinterestEmail