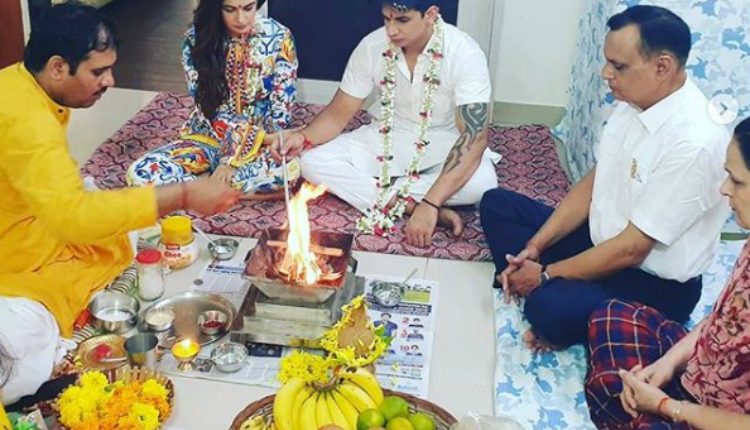 Nach Baliye 9: Prince and Yuvika celebrate 1st Anniversary with a havan at home!!

It was raining weddings in our telly town last year. Stars were getting hitched one after the other and we were busy congratulating them. One of the most adored TV couple Yuvika Choudhary and Prince Narula have now completed one year of their blissful marriage and are seen these days dancing their way to our hearts in Nach Baliye 9.

On October 12, the two love birds will complete a year and to honor the same, they had a small havan at their home. Seeking blessings is an integral part of Indian culture and with the presence of parents the experience becomes all the more enriching.

Present with Yuvika’s parents, Prince and Yuvika looked enchantingly beautiful together.
Have a look:

The two had fallen in love in Colors’ reality show Bigg Boss and since then they have been head over heels in love with one another. Talking about their love story, Yuvika had earlier talked to BT saying “We were strangers inside the Bigg Boss house. While Prince developed a strong liking for me in the beginning of our stay, I wanted to take some time. We fell in love much after the show ended. I even told him inside the house that if he is trying to be pally with me for the ratings, I am the wrong girl. However, his feelings were genuine. He would often tell me that I should talk more, as he feared that I wouldn’t last for long on the show (laughs!). We are one of those few jodis whose love blossomed on the reality show.”

Do you think Patiala Babes is losing charm?