Everyone is enjoying the side view as the penthouse is somewhere located near forest … While Mrs. D’Souza with other staff was busy in working ..

Neil and Sia both left for a walk … Whereas Rishi , RiAnsh is in lawn and Uma had took Vanya for a quick shower ..

All of them are having coffee , as usual Vansh is flirting with Riddhima .. but awhile later rishi spoke up …

Rishi : ” Hayyeee !! You both look so good with eachother .. wish I would’ve married , so that even I too have flirt with my …. ” With this he gave a sheepishly smile …

Whereas Riddhima slaps her head .. who to forgot , he had a memory loss ..

” It was three year and 4 month ago when we met at my college for a feast .. ” Riddhima smiles ..

” Wish I have returned back before Vansh .. ” muttered rishi .. but Vansh who was standing beside him heard ..

It was peasant evening .. Riddhima was all ready in her saree , looking the gorgeous .. that was when Vansh took his entry and then his eyes fall on Riddhima , while same with Riddhima and then they shared a passionate eyelock .. and .. ” this beautiful story line got cut off by Riddhima ..

Silence, it was like silence took place there .. but the most shocked person is none other than Vansh ..

With the apparent thought , Vansh placed his palm of his right cheek , as if he can recall the scene .. And then without any word Vansh moves from there ..

Riddhima opened her eyes , met with shock faces .. and the most Vansh .. who silently left the placed ..

While she too followed him… The soon they moved out .. Rishi took his place on the chair and laughs out , which Sia too joined ..

” You slapped me .. ” he voice out with a stern face .. Riddhima slightly nodes and lowered her head ..

” So you deserve a punishment .. ” Vansh walked to her .. Riddhima again nodes .. on which vansh led out a smirk .. and closed the door ..

He held up her chin with his thumb , to look her up … And without any further time , he kissed her .. chewing her lips aggressively .. Riddhima got little surprised but when he wrapped his arms around her waist , she too kissed him back .. and her mouth .. to give him the permission to explore the every corner of her mouth …

And with this he picked her up , while she wrapped her legs around his waist and without breaking the kiss Vansh made her laid down ..

Riddhima stripped herself .. whereas Vansh was removing his shirt and trouser .. breaking the kiss ..

Vansh hovered on Riddhima , planting a amount of kiss on her shoulder blades and her neck .. whereas his hands were kneading her br*ast ..

Riddhima was trying hard not to suppress her moan , but although every now and then it escaped ..

Then Vansh pushed her .. and then moved down there , were she was already wet .. he parted her legs and started sucking pu**y , Riddhima immediately clenches the bedsheet and moaned loudly ..

Riddhima pulled him up and kissed .. and in between this Vansh slowly pushed his erection in her and gave a hard thrust .. breaking the kiss , Riddhima held his hand Which was pushing his dick in .. and led Vansh confused ..

And so on Vansh gave a slow thrust to her .. and laid down panting , the soon they reached the climax …

Now it was the dinner time , Riddhima was in kitchen with Sia while Rishi in his room , Neil was talking on phone .. whereas Vansh and Angre were in hall ..

” Yes boss , even I have put tight security there , So no worry and Tomorrow itself we are gonna supply to them .. ” he whispers back …

” Vansh come and have dinner.. ” Riddhima gave a soft smile to him .. 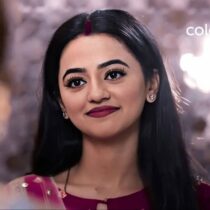 Everyone took there place .. and with chit-chatting all started having their dinner ..

” Sia , you too have , I will back feeding aayu , she might have woke up .. ” and with this Riddhima exclude herself from there ..

Soon everyone sat in hall , after their dinner .. all was enjoying but then something strikes Vansh ..

” Don’t know Bhai , bhabhi said that she will be back feeding aay…… “

” VANSHHHHH .. ” came a broken Voice of Riddhima … She came running down stairs ..

While Vansh immediately stood up , and holds Riddhima was crying ..

” where is my daughter .. ” Vansh roared with red blood shot eyes .. to Uma

But then he received a message … he immediately left in a corner and read the message ..

This time Vanya is really kidnapped ..

Pratik Sehajpal talks about his role of Rudra in Naagin 6

Neha Kakkar gets badly trolled for her weight gain