Smiling a little , Vansh started feeding her .. while she had locked her eyes with him … Soon she finished all the food placed in the plate …

Without asking anyone , he himself brought the another dish with her lemon juice ..

Vansh : ” Open your little mouth sweetheart .. Aaaa ” taking one morsel near her lips ..

While Riddhima took the other morsel from the plate and ask him .. ” You too , I know you didn’t had your lunch , isn’t it ?? .. ” while Vansh got teary , although he hurt her , her feelings , so much but still she cares about him ..

Then , they both spend their little time feeding and chit chatting with each other ..

This time Riansh and Vanya had their dinner together … They even ask the lady to have the dinner with them .. First she denied but later she agreed as Vansh requested her ..

Lady : ” My name is Uma .. ” and then they bid good night to each other and left after the dinner ….

Vansh was sitting on the bed , reading magazine ( Kuch aur Nahi miltana mujhe isiliye .. 😁 ) , and Vanya was lying beside him playing with her legs .. 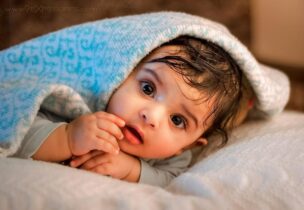 But Vansh diverted his gaze to Vanya and calls her..

Vanya laughs a lot and throws her legs in air .. but they both got silence when Riddhima comes out of the bathroom .. ( Mrs. VR’s aura )

Riddhima : ” What happened , why you both got silence .. you’re having fun , then continue .. ” while Vansh looks at Vanya and then Riddhima ..

While Vansh stood up shock , and taking a small steps , he get close to Riddhima … And then pick her in bridal style .. making her gasp ..

Carrying her to the bed , he carefully place her at the bed , and peck her forehead , while riddhima smiles gesturing his this love and care …

But the next thing , make them hell embarrassed ..

While riansh sat there rooted .. Is .. is this really she said that … Getting hell embarrassed , they laid down, while Vanya in middle of them ..

Taking the nighty down Riddhima placing the nibble of her br*ast in Vanya’s mouth , switching the lights off ..

While Vanya laid there confused .. Did she say something wrong ?? .. Thought Vanya .. sucking the milk and slowly slowly , she drift in the sleep ..

Whole Rai Singhania Mansion was in a rush .. Miss. D’Souza and the servants were packing there snacks for the journey .. while riansh was in Their room , packing the bags ..

And Vanya , she was with Uma .. actually she is giving a massage to Vanya ..

Uma : ” So baby you are now ready , you know baby we are going to penthouse of your Papa’s .. ” whereas as our Vanya baby is intelligent , she started clapping her hands with a smile … 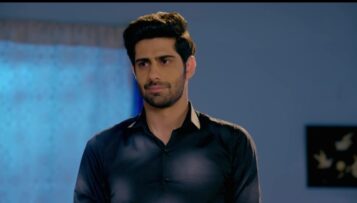 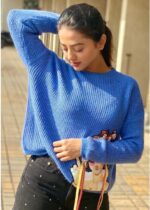 She was wearing a blue tank sweater with a black jeans ..

She was looking super hot , and of which he feared ..

Yes , as that Rishi the back bencher , will also be there .. this is the only thing , which is one by one eating him …

” Hot .. ” was the only word which escape out of his mouth , while Riddhima blushes ..

Taking a quick step to Riddhima , he tugged the hair strands , which was disturbing his view and then kiss her cheeks , at last he rub his nose with her … Till now Riddhima became all red .. 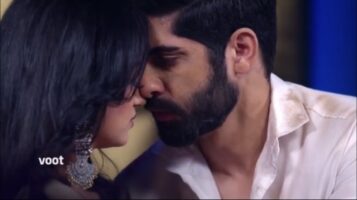 Vansh : ” You are are looking ravish Riddhima .. ” kissing her nose ..

And leave the closing the door with a bang .. while Vansh stood there puzzled ..

Pushing his thoughts aside , he walked out off the room .. down where Riddhima with Uma and Vanya was already present …

” We have to first go my house then at rishi’s .. ok .. ” asked squeezing , while Vansh just hummed , as his all mood got off after Riddhima took rishi’s name …

But I will make sure , that rishi the back bencher will be out of my and Sweetheart’s romance …

So wanna see the jealous Vansh .. wait for the next chapter ..

And hope you like and little Romance .. I will try for more ..

And sorry actually I took a small break from this story .. Sorry I make you’ll wait …

Pratik Sehajpal talks about his role of Rudra in Naagin 6

Neha Kakkar gets badly trolled for her weight gain