Next day Mehak woke up late. She was not able to find Smriti and Swati. She thought that they must be woke up early. She removed the duvet and stood up. She found a gift box placed on table. She took the box. There was a note on that box.
‘My love…I know you will be worried about Smriti di and Swati di…lemme tell you there is no one in house…don’t be shocked…they are here in KM as maa want us to get married soon so she want to throw a party for introducing you to our relatives and also for our mehndi but you were sleeping like a baby so I refused them to woke you up and they get ready and came here with me and di…here is a dress for you…get ready in this only…you will look very nice this…’
Mehak smiled after reading his note. She put that aside and went to have a shower. She got ready in navy blue off shoulder gown with peach colour dupatta that was having beautiful lace on borders.

She was adoring herself standing before mirror and blushed recalling his proposal. She was recalling her moments with Shaurya. From childhood to the college days both fought with each other a lot of times. Shaurya was kind hearted but she was never being kind to him as she consider him to be like his selfish father. She get up and left for the party. As she reached KM she was in awe to see all the decorations but there was only dark and no one was there.
“Shaurya…maa…Shaurya…where are you all??”
She felt two strong hands on her waist. She felt him near and smiled. He pecked her cheek and she smiled.
“I am here only my love…”
She turned and encircled his nape. He was smirking that didn’t took even a second for Mehak to guess that it was all his plan so that they could get some time privately. He pecked her cheek and she chuckled as his bearded cheek rubbed her soft cheek.
“You should shave a bit Shaurya…”
“Well my girl friend loves my bearded cheeks…so I can’t shave them…”
“Oh really…and who is your girl friend??”
“You want to meet her??”
Mehak nodded in yes. He could sense the jealous feeling in her on the mention of his girl friend. He turned her and pointed in a direction. She looked in the direction. A beautiful girl was standing before her eyes. She smiled and looked at him. He winked at her. He pointed towards a large mirror.
“How is my girl friend??”
“She is a akdoo, chubby and stupid girl…”
“How could you say that about MY MEHAK?? She is world’s best girl and I love her the most…”
“Really??”
He looked deep into her eyes. She was looking more beautiful. He didn’t replied to her question. He bent to taste her rose petal lips but she moved away and patted on his cheek.
“Last night you get your sweet by froad but not now Mr. Ahlawat…you have to work hard for it…”
“I am ready for that my love…”
Mehak ran out of his hands and he followed her to catch her. She was running here and there in the whole house and showing him tongue when he was not able to catch her. She went upstairs and he too followed her. As she hid in the balcony he saw her hiding there but left. She sighed and came in the room.
“Not so easily Mr. Ahlawat…I will give you a tough time to catch me…”
“I know baby…”
She shocked to hear his husky voice just behind her. She gulped her saliva and turned closing her eyes. He pulled her by waist still her eyes were closed. He studied her for almost 15 minutes and she was expecting him to kiss her but he was busy in studing his beauty. She slowly opened her eyes and his grip on her waist tighten. She again closed her eyes. He ran his finger over her forehead coming to lips. He ran his thumb over her lower lip and palmed her cheek. He pulled her more close to him and pecked her cheek.
“Look like my dhakad boxer is scared of her husband to be…”
“I…I am not…I am not scared Shaurya…”
“Then why are your eyes still closed??”
She bite her lower lip. He ran his finger over her hand and her shoulder touched her cheek.
“Why you lift you shoulder on my touch??”
She was so nervous and butterflies were in her stomach. His proximity was making her weak and go on her knees. He turned her around and hugged her from behide.
“Shaurya…please…what if someone come…”
“Then let him come…I am your husband to be and have rights on you…”
“But…it’s not right before marrige…”
He smiled and showered her with kisses all over her collorbone. She felt as if this had happened before and before she could do something he sat on bed and made her sit on her lap.
“Shaurya…”
He put his finger on her lips and took out a pendant in heart shape with diamond embededded in it. Her eyes widen on seeing the expensive pendant. He made her wear the pendant. “Shaurya…are they real diamond??”
“Nhi toh kya made in China hai (No no they are made in China)…obviously they are real diamonds for my diamond…”
“Have you said that before too??”
“I am saying that for first time…why??”
“Actually I am feeling as if you had said these words before too…” (getting up from his lap)
“Last night when you proposed me then also I felt as if we had done that before too…as if you had proposed me before too but don’t know when…and now also…”
“Mehak…I too felt like that but we never done that before…you remember how we both used to fight with each other on every single thing then how come we both could be so loving to each other??”
“Whatever Shaurya but I am felling weird…”
He turned her and palmed her cheek with one hand while another on her waist. He was looking at her with love filled eyes.
“You don’t take much stress…today is our mehndi so don’t be sad…”
“I am not sad Shaurya but try to understand Shaurya…I am having a bad feeling about that…and after Shwetlana auntie came I am getting dreams again that I used to have in childhood…there are so many things Shaurya that I want to tell you…”
“I know Mehak…but it’s not right time to discuss them…”
He was signalling her something with eyes but she was not getting what he is saying. At last he hugged her and whispered in her ear.
“Shwetlana is here and listening to us…act as if you are satisfied now…”
“Hmm…you are right Shaurya…I should not take stress…may be it’s hangover of my past life when everyone was against us…”
“Good…now don’t talk about those dreams again…maa would be back from temple so let’s go…”
As they came out Shwetlana hide behind the curtains and they left.
‘Thank god that this Shaurya is not like SK otherwise he won’t take a minute to recognise my real face…’
She too went downstairs to enjoy the function. Smriti and Mehak sat on aternative sofas and artists applied henna on their hands. Mehak was continuously looking at her henna. Seeing her like that he went and sat beside her. 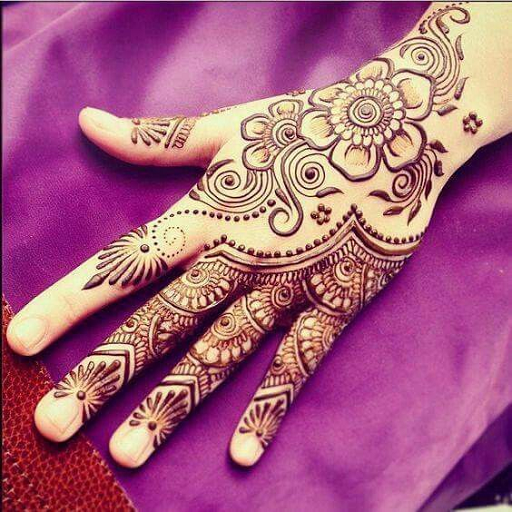