Hai friends I’m back with another episode. Thank you for your support.Keep supporting. 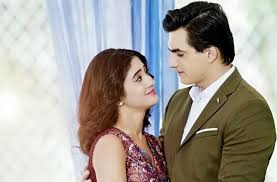 Naira: Kartik…where do you want to take me

Kartik: To a place where we can be alone for sometime my jaan..it’s been so long since we were alone

Kartik and Naira hop onto his bike and leave. The scene freezes

Akash: Naina…do you even know how much I’ll miss you once I leave for Delhi 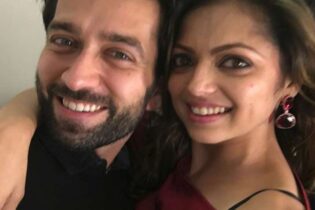 Naina: Not more than how much I’ll miss you

Just then doorbell rings.
Akash goes to the door with a frown and is shocked to see Mishti and Abir

Mishti tells him the happenings.

Naina: This sounds serious..Mishti can you guess who it is

Mishti is singing in a music competition in Dehradun. She wins the first prize. Suddenly the lights go off and she feels that someone has kissed her on her cheek. Once the lights are back she finds a paper in her hand with a note written for her

Note: Hey…your voice is as sweet as honey…I love your voice and you…- Your loveable crazy fan

Mishti: I didn’t hear of him anymore..but now he is the only guy I could think of and I felt the same presence one day when I felt being followed.

Abir: I was so foolish that when she told I didn’t care much

Akash dials the number on the phone. Mishti is fidgeting her skirt in tension Abir senses it and holds her hand tight to comfort her. 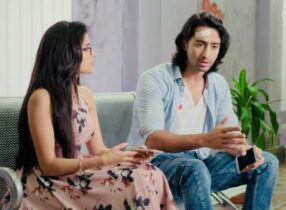 Akash: Mishti don’t worry the number will be traced within tonight..from now on switch on your location and keep sharing live location to Naina and Abir. We will not let him do anything to you.

Mishti has a faint smile on her face while Abir is tensed for her safety yet he has a huge smile to make Mishti happy. The scene freezes.

Scene shifts to Anurag’s office. Prerna rushes to his cabin. Anurag is surprised to see her.
Anurag: Prerna…

Prerna: Anurag I need to tell something important to you

Anurag: What…Komolika brought Sid to us…but Prerna you are actually right Komolika was there in the same resort where we stayed I saw her name in the entry list so Sid can’t be bluffing…and if she had brought him..and thinks that we had a forced marriage..we must think and act…we must know her motive

Anurag: I understand your feelings…see Sid can’t do anything…we love each other and we know that too..so don’t worry..from now I’ll keep an eye on her…she was my college friend that’s why I didn’t want her to suffer for money but if she thinks this as something else we have to teach her in her way

Prerna: No one will come between us na

Anurag goes to her and gives her a tight hug. 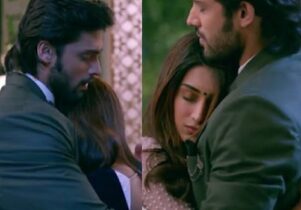 Anurag: Is there any gap for someone to come between us

Anurag : You keep smiling like this..don’t worry about anything I’ll take care of it.

The scene shifts to a roadside shop. Kartik and Naira are enjoying cold drink there. 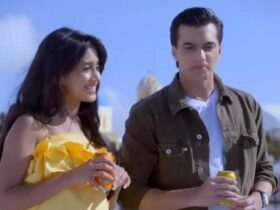 Kartik accidentally spills the drink on his shirt. Naira gets closer to clean it. Kartik holds her by the waist and pulls her much closer

Kartik: Let it be..am I fearing anyone

Naira pushes him away. Kartik turns away in fake anger

Kartik: Who is it

Kartik: What do you want

Naira: A grumpy guy went by this side

Kartik: Am I Grumpy

Kartik: Whatever it may be I’m yours..you are  it gonna get any exchange offer

Aashi who stops her car on seeing them comes nearby to eavesdrop their conversation. She gets jealous on hearing Kartik’s words

Naira: Who wants an exchange offer

Naira gives him a peck on his cheek 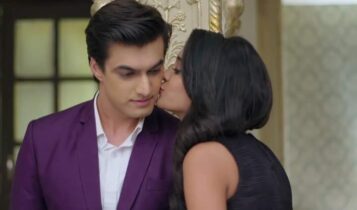 HEY FRIENDS PLEASE DO MENTION YOUR VIEW ON THIS EPISODE IN THE COMMENTS BELOW. THE IDENTITY OF THE STRANGER FOLLOWING MISHTI WILL BE REVEALED IN NEXT EPISODE.