Love Is In The Air Episode 34

The game proceeds for some time. Thats when the staff blow the whistle.

Staff: Its recess time. Leave the game as it is and come for the snacks

Everyone go to the garden area for the snack. Keerthi and Naira are missing

Naksh: Kartik did you see Naira and Keerthi?

Kartik : No..woh Naira and I went in opposite ways for the clues then I did not see her

Anurag: Prerna did you see her?

Akash: How can they just disappear? Lets search. But be in pairs. Dont get lost

Kartik and Naksh pair and search for Naira and Keerthi 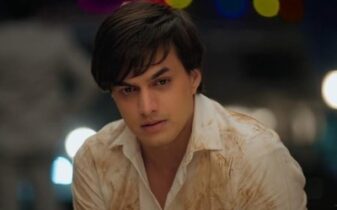 The sound echoes in the woods

Thats when Kartik sees an unconscious Keerthi and runs to her. Naksh follows him

Naksh takes Keerthi in his arms

They take her to the garden and Mishti gives her first aid. Keerthi slowly regains consciousness. Naksh hugs her

Naksh: Keerthi are you alright?

Kartik: What happened to her

Keerthi and Naira are searching for the clues. They sense some movements around them and bump into each other.

Naira: Keerthi bhabhi did you feel something strange?

Keerthi: Haan Naira…did you too?

Keerthi: Ab chal we are deep into woods I think we should move away to the main spot

As the turn they see a guy with the mask and black outfit. Naira holds Keerthi closer 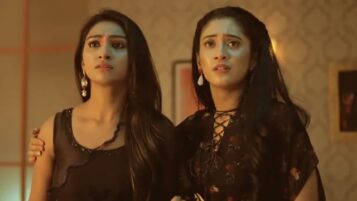 . The guy moves towards them. Naira and Keerthi move across the safety zone into the deeper woods. Naira pushes the guy and they both turn to move. The guy throws a rope around Naira’s neck and pulls her 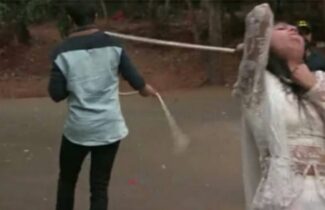 . Keerthi tries to stop him when he hits her on her head making her fall

Kartik: This is serious

Akash: Girls be here. Keerthi can you show us the spot?

They reach the spot

Akash: Naira must be somewhere here. We have to find Naira first

They spilt and search for Naira. Thats when Naksh sees an iron lid closing a chamber in the direction towards the resort. He doubts it and goes nearby to open it. Naksh sees a water chamber beneath it. Kartik too comes there. He sees water bubbles and jumps in. And there is Naira inside water losing her consciousness slowly 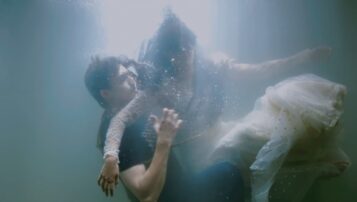 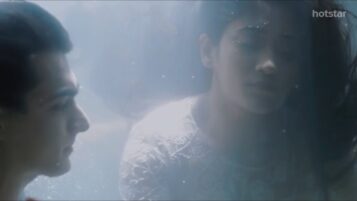 Kartik removes the ropes from her neck and pulls her up 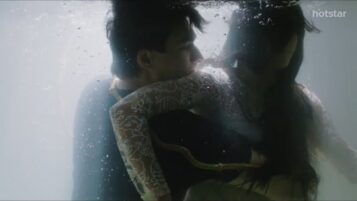 but is unable to climb to the land.

Akash : Kartik tie the rope around you and give us the other end. We will pull you

Kartik follows it and finally Kartik and Naira are pulled out

Kartik carries Naira to the resort 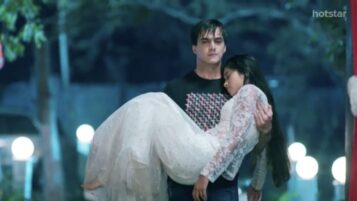 Akash : Are you guys kidding. Someone has hurt two of us here. Are you showing us the cctv footage or not

Anurag: Who is he?

Akash: Mr.Mehta’s worker maybe. Mr.Mehta…I will not leave you now

Mishti: Do something bhaiya

Akash calls Lallu and tells him something

Naira is lying in the bed and has gained consciousness. Kartik holds her hand 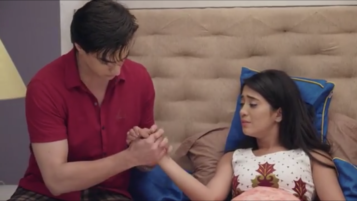 Kartik: Thank God you are alright

Naira: When you are nearby how can I not be alright?

Naira: Shut up Kartik. You have no mistake in it.

Kartik: Are you feeling alright?

Naira: Haan..woh bas..my head is paining a lot as he hurt my head while pushing me down. I remember his face well. Tomorrow

Kartik carcasses her head and the scene freezes

Its next morning. Kartik comes to visit Naira in her room. She is still sleeping

Prerna: Ill wake her up Kartik

Kartik is about to go when Naira wakes up. She has a childish smile on her face

Naira frowns at him

Prerna: You both talk Ill get you chai

Kartik and Prerna are shocked

He holds her close. Naira spats his hand

Prerna runs to Keerthi and Naksh. Everyone rush in. Kartik is weeping in a corner when Naira is behaving in a weird way