Hi all!!
Recap
Pooja and Pulkit gets stucked in a room where pooja proposes pulkit. The family sees their togetherness. Nishi accuses sona and pulkit. She Conspires with an unknown lady against sona.
Here we go into next episode!!!
Scene 1
Nishi goes to an unidentified location.
She rings the bell and a woman opens.
Nishi: Sarita… 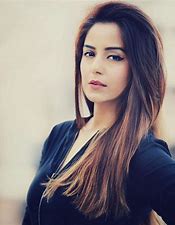 {Sarita is Shristy Rhode who acted in PunarVivah 2 with Karan Grover – You can google for more info}
Sarita: Chachi. Come in.
Nishi: How are you?
Sarita: I’m just living with my mom’s memories. What else can i do? That sippy family crushed my and mom’s dreams and also naren sippy made my mom’s life the hell.
Nishi: It’s all because of bhabi.
{FB}
[Veena asks sukhmani to marry sarita’s mom to her brother. But sarita’s mom was against it as she loves some other man. Veena forced Naren and sukhmani to accept this alliance which created hatred for veena on both nishi and Sarita’s mom. Sarita’s mom was nishi’s elder sister. She was a paediatrician in sippy hospital. Veena’s brother was working in a small company and was living a middle-class lifestyle. Sarita was born. Sarita’s mom and dad fights for all petty reasons. one day, during a fight sarita’s mom told her husband that sarita was the daughter of her boyfriend and not his. This led to a big clash in the family. Veena then accepts that she knows this. She even spoke with sarita’s boyfriend. but he told he needs time and should concentrate in his medicine field. He was too a doctor. Sarita’s mom decided to abort baby but veena ask her not to do that and arranged marriage. After knowing the truth, sarita’s mom and her husband divorced and got separated. Veena’s brother remarried. And Sarita’s mom was not accepted by her boy-friend. The sippy family ignores her and sarita. They removed them from sippy family. So, she with sarita started living in a small house and working in a small clinic. Nishi was the only one who visits them. Later Sarita’s mom dies when sarita was 18 yrs old. During her last breath, Sarita’s mom took a vow from sarita and nishi that she asked sarita to get married with Rohit. So sarita hiding her identity, joins Rohit in his gym and became friends. They both started loving each other. The family also accepted her without knowing actually who is she. Nishi was happy. Sarita truly loved Rohit and Sippy family forgetting what they did to her mom. Seeing veena, Sarita really admired her and loved her. But one day, Veena saw Sarita with her mom’s pic and her identity is revealed. Sarita is thrown out of sippy family. Rohit was heartbroken as he misunderstood that she cheated him for wealth. Sarita tried in many ways but couldn’t gain hope and trust from Rohit.]
Sarita: But even now, I don’t have any hatred for Veena ma. I just need everyone. I need a family. From young age, I was living alone. I don’t have anyone.
Sarita cries…
Nishi Consoles her…
Sarita: I can’t see my Rohit with some other woman. You know what chachi, when I saw that press meet, I was devastated completely. And his wedding videos broken me completely. Preesha was very clever. She kidnapped me during their wedding, so that I couldn’t able to do anything.
Nishi: Don’t worry Sarita. You are also like my daughter only. Please don’t cry.
Sarita: I know chachi. You are my only hope now. I should reach Sonakshi and will ask her to go away from my Rohit’s life.
Nishi: She won’t go. Rohit loves her dearly.
Sarita: I know Rohit very well. If something happens to his ego then definitely, he will throw that person. But chachi, I should have listened to your idea about spiking drinks. If that was happened, I would have been living with my children in Sippy’s mansion.
Nishi: What’s the use of speaking that now. I’ll leave. You take care.
Sarita: Go to Preesha’s birthday party tomorrow. My game starts from there. You will have lot of entertainment there.
Nishi laughs and goes.
Sarita in evil tone: Sonakshi enjoy your wedding life to the most because Rohit is not yours….
Sarita sees an album of her and rohit’s engagement pictures. She cries seeing that!!! 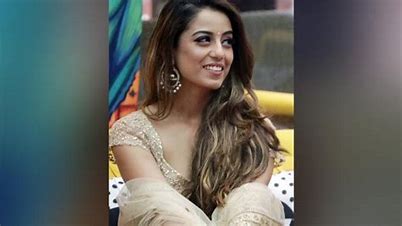 Nishi comes out of the house and thinks!! 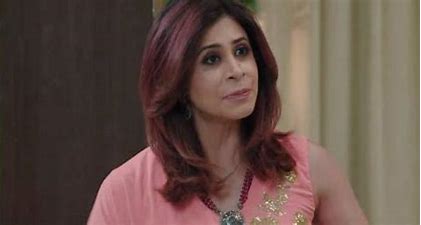 Nishi: Poor girl. She believes me a lot. But she doesn’t know that I am the one who kidnapped her. I will gain her trust more. She is an idiot to fall in love with Rohit. I told her just to pretend to love him. So that after she marries, I can use her to take all the wealth from Rohit and Naren. Instead of taking revenge, she was ready to serve Sippy family. So, I separated her from Rohit. Now she has some anger which will transform into revenge. I will do it. I will have all the wealth. Even my own sister and bhabi doesn’t know that sarita is Veena bhabi’s brother’s daughter only. I changed didi’s reports about pregnancy. She was not pregnant at all before marriage. All the setup was done by me. I just need the wealth.
She goes!!!
{Reason behind Nishi’s evil mind – Nishi was born to naren’s dad and another lady. But Sukhmani accepted her whole heartedly. And even others accepted her. But Sukhmani didn’t accept her mom. So, her mom left nishi in sippy mansion and killed herself. To avenge that, nishi turned evil}
Scene 2
Sona goes to wasteroom. She gets an album. She sees a group pic.
Sona: Its look like a family pic. Somebody’s wedding photo itseems. But I have not seen this lady and man anywhere and not in any functions. Who they are?
Sona goes to Tanya…
Sona: Tanya, who are they? 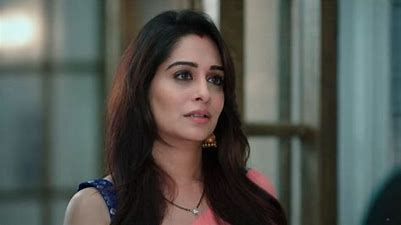 Tanya gets shocked seeing that!!!
Tanya: Di, I don’t know. Maybe friend or something. Leave that old things, Come and play with samaira. Veena called me, I’ll go and come. Take care of samaira.
Sona plays with Samaira!!!
Tanya goes to veena and tell about sona seeing the picture.
Veena: Oh god. This shouldn’t happen. If Sona comes to know, then things will get worse. We should handle it somehow. 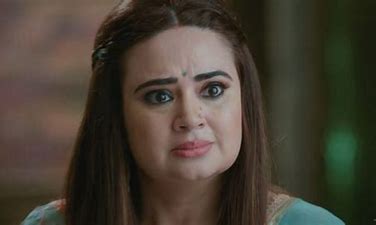 Tanya: First we need to clean waste room and should remove all the old things.
Veena: I’ll take care of that. Tomorrow I will ask to clean when we go to Preesha’s birthday party.
Tanya: That’s a good idea ma.
Scene 3
Preesha goes to sleep. But sarnaash and rudy wakes her.
Preesha: I’m very tierd.

Rudy: Its ok. Come play with us. 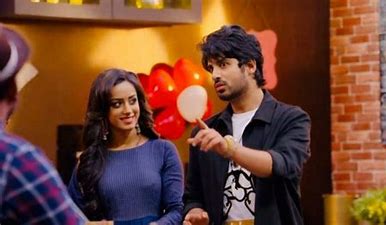 Preesha: I know you are going to cut cake at 12 am.
Sarnaash: Ok you know nah, so don’t sleep. Play with us…
They both plead by holding their ears.

Preesha agrees and plays with them. Preesha wins the ludo game.
Sarnaash: Papa, you purposely made mumma winner.
Rudy: Even you too made your mumma winner.

Preesha: I know you both made me winner by not cutting my coin rather you both cut your coins repeatedly. But only during birthdays, you people shower me love and behave like good boys. But on other days, you will be the naughtiest boys.
Rudy: Acha, I will show you what naughty is.
He suddenly kisses preesha in her cheeks. Sarnaash too kisses her…
They both tell that they love her a lot…
Preesha: I too love you both a lot….
They three hugs!!!!

Scene 4
Sona comes to room and sees Rohit sleeping…
She goes near him!!!
Sona: Why are looking so cute Rohit? I love you a lot. Thanks for making my life colourful. But you are becoming boring now a days. Who will sleep like this when they have a beautiful wife like me? So mean.
Rohit wakes up and tells he is not mean…
Sona gets shocked and surprised that he was awake…
Rohit: Am I boring? Wait now I will show you what I will do having a beautiful wife.
Sona asks him to be quiet….

Rohit but does not leave her and kisses her….

They both romance by not closing their door… Nishi hides and takes video of their romance…She mistakenly makes noise. Sona then realizes that she didn’t close door. She goes and closes door…Nishi hides…
Then Sona and Rohit romance!!!! 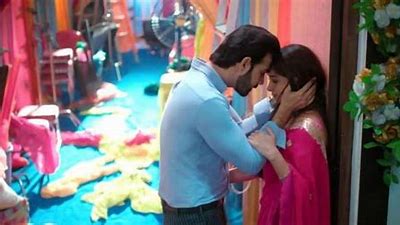 Sona removes Rohit’s shirt and he covers them with blanket and offs the light.
Nishi: This is enough for me. I’ll send this to sarita and trigger her…
She smiles in evil.
Sarita sees the video and cries a lot…
Sarita: Why Rohit? Why did you do this to me?
She looks at a picture where Rohit kisses her and cries!!! 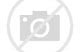 Here Rohit tells sona that he loves her more and they both sleep together!!!