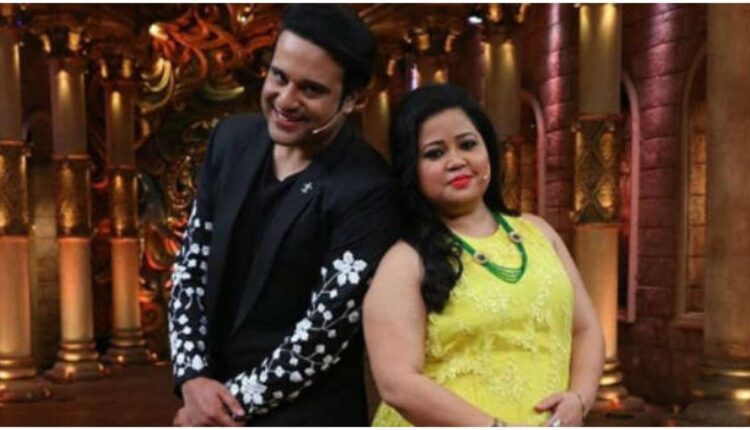 Just recently, Bharti Singh and her husband Haarsh Limbachiyaa were arrested by the NCB officials. The probe was initiated after SSR’s death and these two celebrities from the comedy field found themselves embroiled in the ongoing Bollywood drugs case. Grapevines went abuzz with the news that BHarti Singh has been ousted by the makers of The Kapil SHarma Show. On Saturday, November 21 , NCB confiscated small quantities of  ganja (cannabis). The two got arrested in this matter and subsequently released on bail on Monday.

Recently in an interaction with Bombay Times, Krushna Abhishek, who is also a part of the show, Krushna revealed about Bharti being slacked from the show  “Bilkul aisa nahi hai (Not at all). I haven’t heard of any such discussion or development from the channel’s end. No such decision has been taken by the channel. Even if something like this happens, I will support Bharti. She should get back to work. Jo ho gaya woh ho gaya (Whatever has happened, has happened). We stand by Bharti and both Kapil (Sharma) and I are with her. She has my unconditional support.”

When prodded about the shoot, which took place on November 27 in which Bharti was conspicuous by her absence, Krushna replied, “I think Bharti was unwell. She herself didn’t want to shoot or else she would have come. We are like family.”

He added, “Bharti has stood beside me through thick and thin. She was the first person to meet me when my father was unwell and also when he passed away. She was the first person to call me when I had my twin boys. I fell sick while hosting an award function with Maniesh Paul, but Bharti filled in for me without batting an eyelid. Kaun karta hai kisi ke liye aisa. That’s the bond we share. So, I had to meet her at any cost after she was released. I don’t know about the world and others, but I am standing by Bharti.”

Krushna firmly believes that everyone deserves a second chance. He is particularly irked about fellow comedian Raju Srivastava’s statement on Bharti and others, including him. “Raju Srivastava ne toh bohot hi bakwaas kee hai. What he said was shocking. Usne lifetime ke liye relationship kharaab kar liya hai sabke saath. Poori team hamaari naraaz hai usse for the comment he made (Team ‘TKSS’ is very upset with him),” he signed off.

For those uninitiated, in an interview soon after Bharti’s arrest, Raju had expressed his shock and anger towards Bharti after she admitted to consuming drugs. He said that he didn’t think taking any form of drugs helped improve one’s ‘creativity’, ‘energy’ or ‘concentration’.