Darius bids farewell from King Bamni while Barsin also joins her father. Kanishk looks at Barsin. She doesn’t care about him and leaves. Kanishk gets surprised. He tries to stop her but stops seeing a Farsi soldier coming. “Everything is ready sire”. We shall leave then” Darius says.

King Bamni tells Darius, “If you want help send one of your men to Paurav Rashta. I’ll send my army to protect your country.”
Darius smiles, “Farsis are undefeatable, so I won’t need help” Puru interferes in between. Then why did Farsis loose the competition?” Darius smirks.

Bamni looks at him. Barsin looks at Puru and says, “Farsis lost only to price Purushottam, not to Paurav Rashta’s soldiers.”
Puru looks at her. Barsin also looks at him. Kanishk stares at both of them.

Darius leaves to Persia. On the way, Barsin remembers her father’s behavior on Paurav Rashta. She says, he doesn’t value me more than wealth? I won’t believe it. They reach Persia.

Meanwhile Alexander, with his army , reaches Persia. Alexander says , “as planned , we should surprise them and finish this battle as soon as we can. Because Farsis’s king is coming back from India. I have a better plan for him than this” . He smiles evilly and orders his soldiers to work according to the plan.

Puru is seen in Queen Anusuya’s room. He is keeping his head on her lap. Queen Anusuya says , “Your father is worried about you”. Puru says ,”I don’t like to talk about him now”. Queen Anusuya understands his situation remains silent.

“Don’t worry . Soldiers will catch Hasthi soon. Then King will
allow you to go out of the palace.” Puru doesn’t reply. Queen Anusuya looks at Puru to know why he isn’t saying anything. She sees Puru had fallen asleep and smiles.

Hasthi and Pritha are shown walking in a crowded area. They are covering there faces with black cloth. Pritha is lifting a luggage in her hands while Hasthi is walking in front of her. They reach a woody area.

Hasthi says, “We should reach Dasyu Lok before midnight”. Pritha says ,”Will they let us stay in Dasyu Lok after knowing that your father is a Senapathi in Paurav Rashta? I’m not sure at all”. Hasthi says ,”Don’t worry. I know how to make them believe us and take us in”. Pritha sighs.

Kanishk is shown walking. He seems to be drawn by a deep thought. He thinks about Barsin and Puru. “You are destroying my whole life” He gets angry on Puru.

King Bamni is shown walking here and there. A soldier comes running. King asks, “Did you find him?” The soldier shakes his head saying “no”.

Darius and Barsin reaches Persia. They go inside the palace. A soldier comes running saying, “Sire they have arrived. They are attacking us” Darius gets surprised, “Without even declaring war?” Barsin looks at him. “If that’s what they won’t, we will give it.” 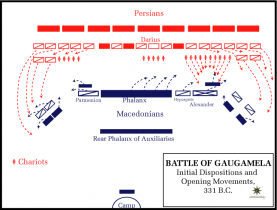 He sees Alexander on the right side of his army. “You can’t even lead your army. So how can you lead Persia? This is Persians country. Not yours Alexander” Darius shouts. 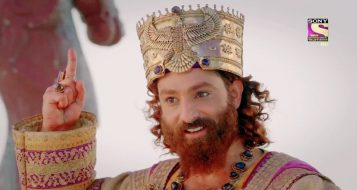 Alexandersmiles at him mockingly. “You are short sighted. I’m not responsible for that. If you don’t keep your mouth shut and fight back , you’ll see who can lead Persia and who can’t “.

Alexander goes towards the palace from right side while Darius is busy fighting with Alexander’s army in centre.

While at Bharath
Puru wakes up and sees that he was sleeping on his mother’s lap. He quickly gets up and asks, “how much time had passed?”. Queen Anusuya looks at him surprisingly. Puru says, “Did they catch Hasthi?”.

Before Queen Anusuya replies him , King Bamni comes in saying, “Not yet”. Puru gets annoyed. He says, “Dasyus can not be caught easily. Only a Dasyu can catch another Dasyu. Allow me to catch Hasthi “. 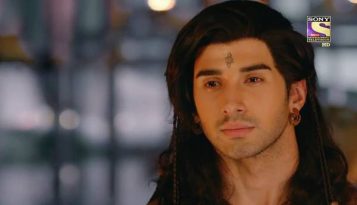 “Are you letting him go?”. Bamni says , “there is no other option”. Puru gets happy. Queen Anusuya gets annoyed. “I’m not letting you go. This is Queen’s order.”

King Bamni comes to her and says, “Give him a chance”. Queen Anusuya says, “What if Hasthi does something to him?”. King Bamni says, “Puru is our son. He can take care of himself. Have faith in him”. Queen Anusuya worries but finally agrees.

She says, “Promise me 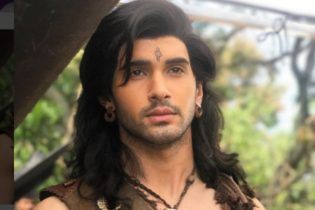 that you’ll take care of yourself”. Puru smiles and says, “Promise”. Puru hugs her and leaves from there. King Bamni and Queen Anusuya looks on.

Puru comes out. At the same time a soldier comes inside running to King. Puru stops for a while to know the message.

The soldier bows and says, “All the Persian soldiers are leaving to Persia sire” King Bamni and Queen Anusuya get surprised. “Why is that?” King questions him. “My Lord, their King has ordered them”

Puru gets thinking. “Why did Darius do so? This is a great time to kick out Farsis from Bharath.” King Bamni looks on. “How is the battle going?” Soldier replies, “We didn’t receive any information from Persia still King” Queen Anusuya looks on.

Puru comes inside. “Looks like they want help” King Bamni looks at him. “Alexander is a great warrior. Darius might want a big army to fight with them. Why don’t we send all the Farsis in Bharath back to Persia, Darius will be relieved because his army will increase.” King Bamni looks on.

Queen Anusuya understands Puru’s intentions. She says, “Puru is right. We must do something to help our friends right?” King Bamni gets thinking. “You are right, we shall do so” Puru and Queen Anusuya smile. Bamni leaves from there. Puru says, “I will fulfill your wish” Queen Anusuya nods and smiles with him . Puru leaves.