Do you think Sumit’s track should end in NAUC?

The show is currently revolving around Sumit, Dolly’s husband. Kabir and Nisha are trying to solve the mystery as they want to help Dolly. But this has put Nisha in trouble again and lead to a high end drama on the show. Nisha and Kabir reach at a construction site to confront Sumit. They warn Sumit to accept his mistake or else they will expose him with the help of the evidence they have collected. Sumit gets furious and pushes Nisha from the under construction building. Kabir and Viraj take Nisha to the hospital. Kabir and Dolly learn about the evidence Nisha has against Sumit. The doctor informs Laxmi and Suketu that Nisha needs blood. Kabir vows to prove his innocence and assaults Sumit.

Kabir asks Dolly to tell the Gangwals that Sumit is innocent. Sumit donates blood to Nisha. Kabir takes the blame and surrenders to the police. The police arrest Kabir. Dolly tells her family that Sumit is innocent. On regaining consciousness, Nisha asks Laxmi and Ramesh about Kabir. Virendra informs Nisha about Kabir’s arrest. Nisha tells Laxmi how Sumit pushed her off the building. Sumit tells Nisha that he has destroyed her phone. 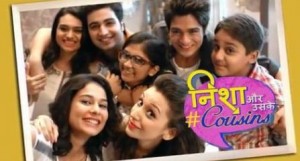 Sumit and Leela are happy to see their plan against Kabir succeed. Meanwhile, Laxmi is frightened learning that Nisha is missing from the hospital. Nisha informs Ramesh about Sumit destroying her phone. She seeks Viraj’s help to prove Kabir’s innocence. Nisha denies Viraj’s allegations on Kabir. Saurabh and Umesh visit Nisha. Umesh suggests of creating a plan against Sumit. Saurabh blackmails Sumit with the tampered evidence against him and asks him to meet outside the shop. Kabir hopes for Nisha to help him get out of jail.

Ramesh pretends to be Sumit and calls Leela to learn about their plan. Saurabh pretends to care for Sumit and apologises to him. Sumit decides to change his plan as he suspects the Gangwals of having learnt about it. Ramesh and Suketu disguise as buyers and take the jewelry from Sumit. Viewers will see Sumit blackmailing Dolly and making her dance around his tune. The girl will get scared and decide to support him in order to keep Nisha and her family safe. Do you think Sumit’s track should end in NAUC? Let us know in this poll.