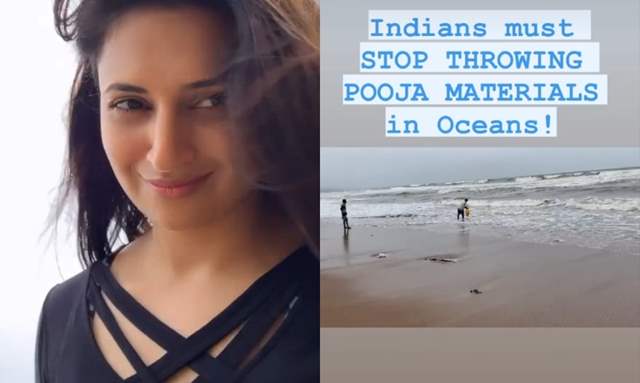 Festive season is upon us and as we embark upon a new journey of celebrating festivals in a new way this year, The Yeh Hai Mohabbatein actress Divyanka Tripathi has made a request to all the Indians. She has always been one to raise her voice when necessary and while she has been vocal about issues on social media as well as in her personal life, today, she decided to speak up for yet another cause. She was at the beach earlier today and she saw something which shook her to the core. She saw a man was seen throwing away the pooja residue from a packet into the ocean and it irked her.

The actress decided to share a couple of videos on social media of the very same act, and went on to share why this practice should stop. While posting the video she wrote,” Indians must STOP THROWING POOJA MATERIALS in Oceans! She also went on to write further, “Polluting water bodies must be banned and fines.”

While the actress did not stop taking the video, it looks like her conversation with the said man did not go very well either as she went on to write what did he tell her when she called him out. She wrote, along with the video, “This English speaking gentleman explained that pooja material must be discarded in water. BMCguys will come and clean. Unapologetic, atrocious behaviour. His Gods must be angry today.”