Hai friends sorry for a late update. Thank you so much for commenting and supporting. Let’s go to next episode.
It’s Devakshi sangeet day. Sona is getting ready. Elena is helping her with it.

Elena: Shona…you look dashing…better get a ventilator because jiju will lose his breath on seeing you

Kajal: Sona…it’s a emergency Mr.Sinha is critical we need you

Sona: I’ll come at once.

Sona: Maa it’s an emergency I should go

Asha: Shona but..Dev and family will be here anytime

Just then Dev and family reach Bose house.
Sona: Maa I have to go

Sona rushes out and hits on Ishwari

Ishwari: Arrey Asha why are you stopping her.. she is a doctor..let her go..Dev…Dev beta

Ishwari: Dev beta Sona is having an emergency in the hospital you accompany her

Ishwari: Sona beta your marriage is day after tomorrow then you are his responsibility right..let him learn from now and moreover if you go what work does he have here

Ishwari: Arrey Bijoy Ji ye function is not like other rasams or shaadi that Dulha and dulhan do something here…let others perform by then Sona will complete her work and will come back

Dev: Maa…I’ll take Sonakshi with me

Dev and Sonakshi go to the car. 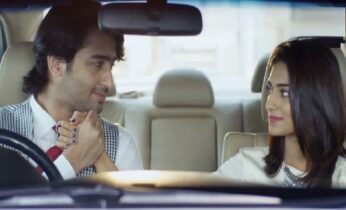 Dev: Haan..I didn’t expect her to send you with me

Sona: Haan even I didn’t

Dev: It’s good that I got some alone time with you.

The scene shifts to hospital

Sona and Dev get inside

Kajal: I’m sorry Sona I know it’s your sangeet but Mr.Sinha is very critical and it’s you who knows his complete medical history and

Sona: Arrey no problem Kajal let’s go to him. Sona gets inside the ICU.

Dev: Actually I came here with

Kajal: Arrey I know it Mr.Dixit.you have accompanied your fiancé..and that’s actually sweet of you

Dev: By the way you are Sonakshi’s friend right

Dev: Then please don’t be formal …you can call me Dev

Dev sits down in Sona’s chair.
Time goes by and it’s been 2 hours since Dev and Sona came to the hospital.

Sona comes to her cabin. Dev is busy with his mobile. Sona clears her throat to grab his attention 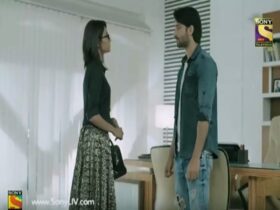 Sona: Sorry Dev I ruined our Sangeet and brought you here and made you wait

Dev: Leave that how is Mr.Sinha

Dev: That’s it. If we had let him suffer in pain and enjoyed our sangeet it won’t be a real happiness. I have supported my fiancé in saving a life and that’s worth all this waiting. But now let’s not waste time and go home.

He holds her hand and pulls her out.
Scene shifts to Bose house. Everyone is waiting for Dev and Sona.

Just then Dev and Sona come there

Neha: I’ll help bhabhi to get fresh for performance

Vicky takes Dev with him. 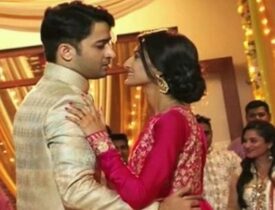 Devakshi sizzle on the stage 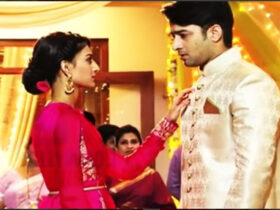 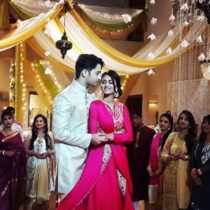