Desire to the Throne_A Saga – Episode 17

Recap: All leave for the war……. Rana misbehaves with Swastika………

Bhoomika and Avantika come there and Bhoomika gets shocked seeing Swastika pushing Rana down.

Bhoomika helps Rana to get up.

Bhoomika: How dare you push my son down?

Swastika: No ma, I didn’t do intentionally. You don’t know what he did… 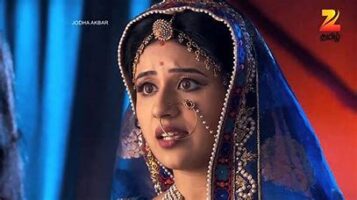 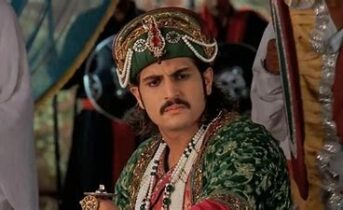 Bhoomika: He may do whatever, but you don’t have rights to push him down.

Rana: Ma leave it. She is a bit possessive wife. She couldn’t see me in Adithya’s clothes.

Swastika is shocked to hear his lies.

Bhoomika: Shut up. He has all rights to wear his brother’s clothes. Go and sleep. Don’t stand infront of me.

Avantika takes Swastika to her room….

Rana sees her and smirks….

Panchali and Urvi come there…

Swastika tells them about Rana….

Avantika: What? He is so cheap. 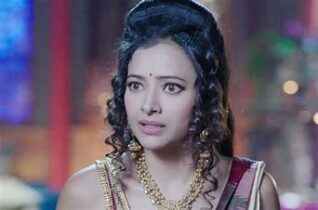 Panchali: We need to alert our elders. 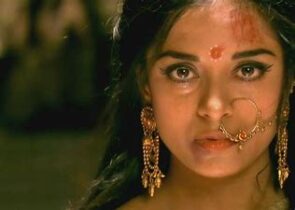 Urvi: Yes, even our husbands are not here. He seems to be dangerous. 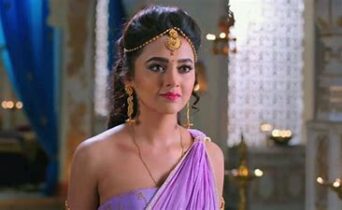 Panchali: Swastika, you don’t go alone. We will accompany you everywhere.

Panchali orders the servants to make the arrangements….

Sumitra comes to her.

Sumitra: Didi, I know something is bothering you so much. What is that? Please share it with me. 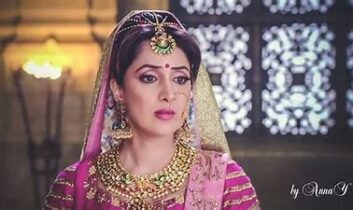 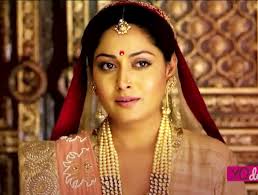 Kaikeyi: Sita, did Kausalya didi and Sumitra had food? 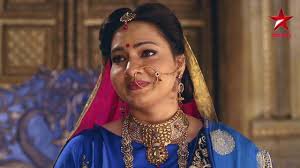 Sita: No ma. We’ll serve food in their rooms itself.

Kaikeyi: Ok then, Sita and Mandavi you go and serve them food. Urmila and Shurthakirthi will take care here.

Sita and Mandavi take food and go to Kauslaya’s room.

Kausalya tells Sumitra about Dashrat’s wish which shocks Sumitra. Sita and Mandavi hears that and gets shocked!!!! 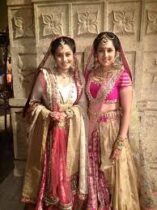 Mandavi drops the plate hearing that. Kausalya and Sumitra and shocked to see their bahus there. 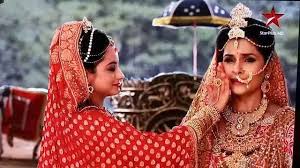 Kausalya: Sita and Mandavi, please don’t tell this to anyone. And don’t worry, we won’t let our sons to do other marriages and also to snatch the throne.

Sita: Ma, we have confidence in our husbands. They are not greedy. They always stand in the path of dharma. But… 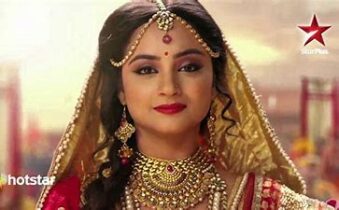 Mandavi: But ma, they are the sons who listen to their parents whole heartedly. If papaji orders them, then we can’t do anything.  We have to accept our fate…. 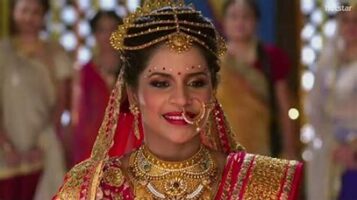 Kausalya: Don’t loose your trust on them. They won’t do such things…

Later, Sita and Mandavi tells this to Urmila and Shurthakirthi… 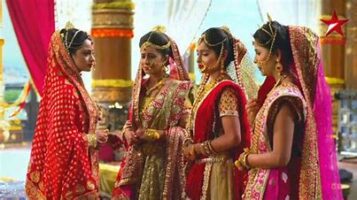 Urmila: Didi, this is wrong. The throne belongs to our brothers.

Shruthakirthi: Yes, even they are strong and equal to our husbands.

Urmila: We need to alert our family. 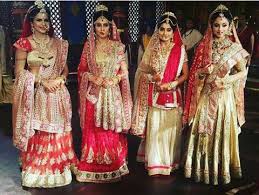 Sita: No one will do nothing.

Sita: I have full trust on our husbands. They will not do such things.

Shruthakirthi: Didi, we don’t have any hard feelings for their second marriage as this is usual in royal family. But this is about our kingdom and brothers.

Sita: Have trust on our husbands. They neither remarry nor ascend the throne. 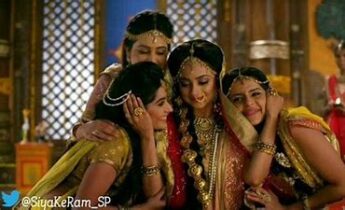 The sisters are confused….

Meanwhile, Ram and his brothers with their army are in way to the battlefield. 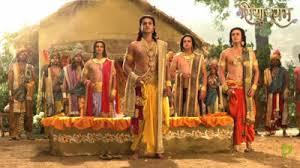 Bharat: Bhai, why people are so greedy? If these kings are not greedy, then there won’t be any wars. The people will live peacefully. Now see, the people of that kingdom will suffer a lot. They need to hide their food, seed, possessions as the opposite army will loot them.

Ram: Bharat, your thought is right. But we can’t avoid this situation. And don’t worry about the looting. Our brothers-in-law are so kind. They took enough food for us. So, we won’t loot the people.

Lakshman: Yes bhai, they are so kind and good people.

Shatrughan: Arjun bhai is so kind. He deserves to be the king. 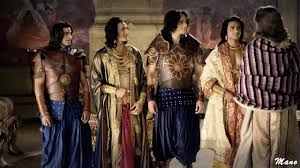 Bharat: But what if we play a major role in this war? Bhai, will you become king?

Ram: Definitely not Bharat. I will just anchor the war but will make sure that Arjun plays the major role. People love him and they want him to be their king. And I don’t want to be the king of theirs. That will be wrong.

Lakshman: Bhai, we are proud of you.

Arjun is in the ship seeing the war plan and he reminisces his sea travel with Panchali before and smiles.

He sees the conch and smiles.

Arjun: I miss you Panchali. I hope you are good there.

He kisses the conch. 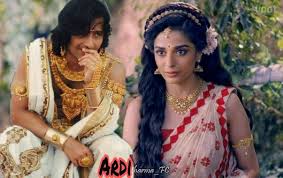 Panchali: I feel that he is missing me… 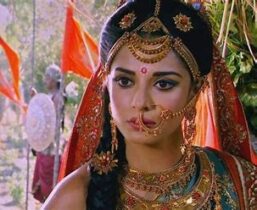 The girls tease her. Subhadra gets jealous…. 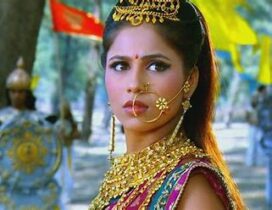 After 2 weeks, Adithya, Arjun, Karn, Ram and his brothers all meet at the common point.

Arjun: This is the common point. From here, we’ll be attacking them from each direction…. 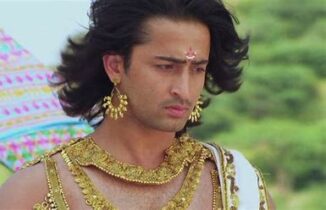 Adithya: Bhai, you lead us. 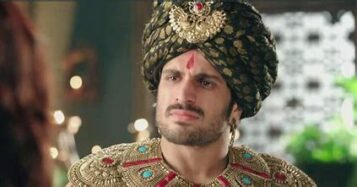 Arjun: No Adithya, I can’t do that. Everyone should get their own space. So, no one leads the other here. But be careful. All our wives are pregnant and are waiting for us. So, be cautious. Don’t let yourself entangled in any conspiracies. 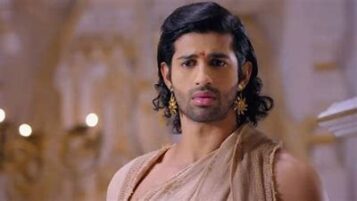 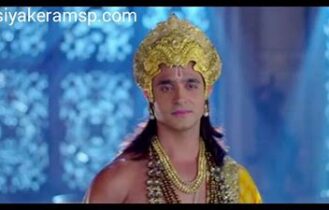 Adithya: Ok, let’s start our attack after the pooja…

They does pooja and goes in each direction.

The King of Persia is the opposite king and he has four sons. They also get to know about the plan through Rana. They attempted to kill Arjun in sea but failed. He also sends each son in each direction….

The war continues to happen!!!!

Devasena and Rathna are introduced. They are the princess and Queen of Kalinga… 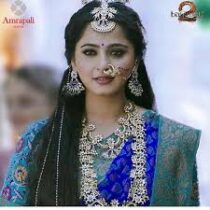 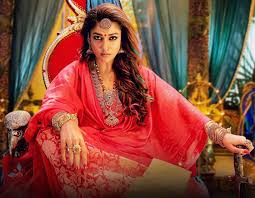 Rathna: Papa, you made me queen right. Then this is my order to cancel this alliance.

Mama: But this alliance will be great for your future.

Rathna: We don’t want any such alliance. And also, I’m sending a little part of our army to Persia.

Devasena: Yes, you denied his request when he came here. But his request was right. The foreigners are trying to invade into our country. We should not allow them. So, me and didi decided to support them.

He cancels the alliance….

Kundhavai: Appa, I’m in love with Vandhiyathevan. I can’t marry someone and leave this kingdom. I’ll be here only. 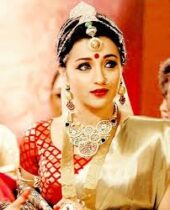 Raja Raja Cholan: Yes appa, Akka is right. She and Vandhiyathevan is in love and we should not separate them. And more over I feel king Dhasrat’s intention is not right. He wants our throne too.

Kundhavai: Yes appa, that shouldn’t happen. Our kingdom should belomg to us only.

Sundara Cholar: Ok, I’ll write a letter to them cancelling the alliance.

Princess Nandhini orders to cancel the alliance with Ayodhya…. 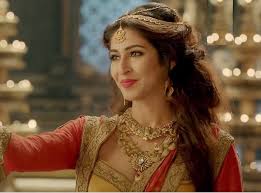 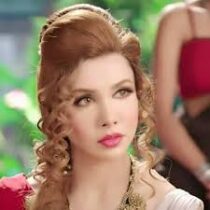 Twinj: Meant to be: Episode 3