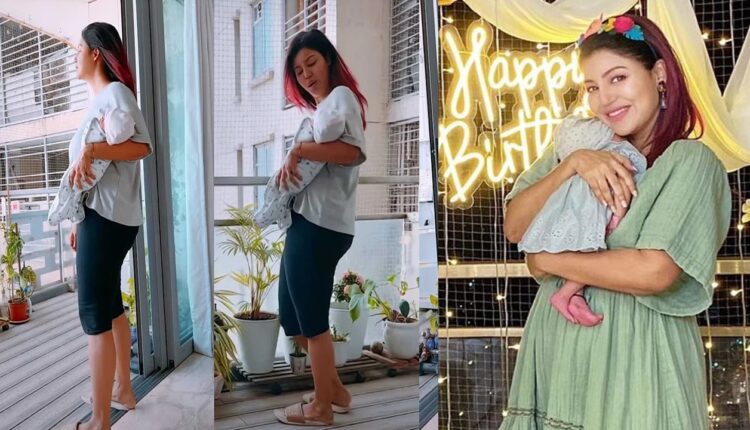 Debina Bonnerjee opens up about her struggle of becoming a mother

Debina Bonnerjee and hubby actor Gurmeet Choudhary, welcomed their first baby, Lianna in April this year. The actress is on the top of the world, relishing her new role as a mother.

However, the journey to motherhood has not been an easy one for Debina. The actress talked about it during a recent interview with BT and shared, “We got married in 2011 but back then, having a baby meant giving away my career. I also had apprehensions ki break liya toh career stake par aa jaayega. The plan was to find stability first before taking another step.”

Amidst all this, the desire to become a mother arose five years ago. Debina, recalls, “I was part of a show and couldn’t quit it midway. So that resulted in a further delay of about two years. Soon after that, I decided to pursue motherhood aggressively. But jab aap nahi chaahte ho tab bohot kuchh hota hai, aur jab chaahte ho tab nahi hota hai.”

She added, “When the lockdown happened, I was undergoing treatments and shuttling between doctors, which was time-consuming and monetarily draining.” Debina was diagnosed with endometriosis and adenomyosis during that time.

Talking about it, she said, “It’s an irreversible and incurable condition. I changed my lifestyle completely. I took steps to reduce the accumulation of toxins in my body and also stopped eating outside completely.”

She continued, “The fight to become a mother lasted five years. I failed five times during the process, which included three IUIs and two IVFs. I also tried alternative therapies, like acupuncture and flower therapy. I would cry all the time because I held myself responsible for the failure. The feeling of reaching a dead-end is devastating.”

Talking about the role of her husband Gurmeet during the journey she elaborates, “My work, workouts, and having the right life partner kept me sane. It’s not a solo journey. The responsibility of having a child shouldn’t rest on just a woman’s shoulders; it’s on the couple. It’s a joint journey. Every time, I faced failure, I would talk it out with my husband. Gurmeet was always positive and made me believe that it was our journey.”

She shared, “I receive a lot of emails from women telling me that their husbands aren’t supportive, but they want to go through this journey to salvage their marriage. I want to tell them that if your husband isn’t with you now, a kid will not bring him back. Bring a child into this world only if your relationship is strong. The child is the harvest of love. Everything is worth it with a solid partner.”

When asked about the recent trolling she received for holding her baby in one arm, Debina replied, “I know what all I have gone through to become a mother. Why will I hold my baby in a way that she could fall? I would get upset initially over such comments, but then I realized that Lianna, my husband, and my family need my attention, not frivolous things like these. Having said that, I am mindful about what I post now.”

Debina also talked about her future plans and shared, “I am getting offers, but I am waiting for a good project to make a comeback with. I have been shooting regularly for my brands, including the day I was discharged from the hospital. At some point, life has to be led normally.”