At the end of the party, Virat steps towards his room. Karishma, Divyani, Shivani bua block his path.

Karishma: Virat dada you can’t enter like this? we have worked hard if you don’t give us something, we won’t let you in.
Shivani & Divyani: yes!
Virat: ok ! ok ! (in mind: 1st Mohit! now they are robbing me. don’t know what my newly married wife will do with me)
Virat gives them five thousand as his entry fee in his own room. They get happy and let Virat go into the room. The room decorated with candles and flowers, 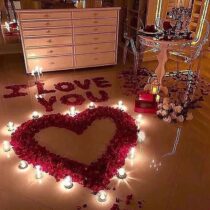 Virat notices Sai sit in the middle of the bed with a big veil. her sarees edge almost cover her face. In the dim light of the candles, Sai looks like a calm river. The fragrance of flowers is spread in the whole room.

Virat in mind:( who will say she is the girl who beaten an IPS officer the day before yesterday)
Virat was enchanted and sit down in front of Sai with a light smile on his face. He was about to lift the veil suddenly she catches his hand and threw it away. Virat amazes by her sudden act. She takes off her veil then take out a cricket bat from under the pillows. Virat gets out of bed with fear.
Virat: Sai? what is this? where did you get this cricket bat?
Sai: I told Mohit there was a big lizard in the room, and ( steps toward Virat) I have to kill it. I asked him to give me something to kill a big lizard.

Sai attack on Virat. Virat jump on the sofa and safe himself.
Virat: Mohit gadha hain kya? who gives a cricket bat to kill lizards! Sai? Now m your official husband. you Aba liked me as his son-in-law. why are you beating me now?
Sai: (gets more furious) you take advantage of my Aba’s trust. not only my Aba’s trust even mine too, Actually you betrayed everyone. ( throw a flower vase to Virat)
Virat down his head n again safe himself. He didn’t get what is Sai talking about. when he betrayed all and how? Before he gets a chance to ask something, Sai threw a pillow at him. this time the pillow hit Virats head. He lost balance and fell from the sofa. Sai steps toward Virat with cricket bat.
Virat starts running in fear, Sai also start running after him with the bat. she also gets chances to beat him 2/3 time by bat. They running like Tom and jerry. after 5 times of rounding Virat tries to get into the washroom to hide but Sai block his way and again beat him, he climbs on the bed Sai also trying to follow him but her leg gets stuck with her saree n she fell on the bed. Virat take the advantage of this situation. He takes the bat and threw it on the roof of the cupboard so that Sai can’t get it again easily.
He takes a breath with relief. Before he could say something Sai pick a pillow and starts beating him. Virat gets irritated but he failed to stop Sai.

Virat: Real lizard!
Sai: what? where?
Virat: next to you
Sai shouts, threw the pillow aside and hugs him. He starts to feel her fast breaths and she starts feeling his fast heartbeats. Sai’s breaths make Virat feel an unknown feeling that he never feels for any girl. Virat’s fast heartbeats reminding Sai of the scene where Virat hugs that girl pakhi and let her kiss on his cheeks. Sai again starting to feel pain in her heart. The pain of sadness. she apart herself from Virat. they have an eye lock. Virat clearly see pains in Sai’s eyes. He becomes more amazed to see it.
Virat: Sai? did I do anything wrong except the marriage? tell me what happens?
Sai: ( make a bridge in the middle of the bed with pillows) Virat sir! from today you will sleep on the left side of the bed.
then she lay down on the right side of the bed. Virat becomes confused. He angrily asks Sai what happen? Why she behaving like this, but Sai stay silent. He keeps asking Sai
Sai: stop it, Virat sir! don’t behave like you don’t know anything?
Virat: what you talking about?
Sai: I saw you with your girlfriend when you guys spending your quality times on the terrace.
Virat hit his forehead with his hand.
Virat: Sai?
Sai: if you had someone in your mind then why you agreed to marry me? how dare you to spoil my life! it’s impossible to stay with you in the same room. will leave tomorrow.
Virat: Sai? she is just my friend.
Sai: oh please! I saw a lot of just friends like you and pakhi. you guys just make fun of the word “friendship”. I do have a lot of friends. some boys are also on my Friendlist. My friendship is not like your friendship. Just accept that you guys are more than friends. M not a fool ok?
Virat: Sai? stop talking rubbish. she is my only friend?
Sai: really? I really didn’t know just friends are allowed to kiss on cheeks and also hugs.
Virat: why you being too backdated? she is modern so!
Sai: sorry m not that modern so lets divorce each other. I can’t live with a over modern person and you shouldn’t live with a backdated person.
Virat: Sai, no more words, please. you taking things the wrong way.
Sai: M taking thing the right way. and from now on don’t you dare to call me your wife.
Virat: I will call you my wife because you are. And stop quarrel with me and beat me like this or else will complain to your Aba.
Sai: as I can’t complain to your parents?
Virat: what you want from me? to stop hanging out with my friends?
Sai: seriously!Mr Virat Chavan?
Sai again lay down n move in the opposite direction. she trying to calm herself. Her heart starts paining a lot with the pain of sadness.
Sai in mind:( Virat Chavan I will not spare you too easily. you have no idea what a woman can do when someone hurts her self-respect. you married me, accept me as your wife was your decision now you can’t insult me like that. you can’t replace anyone in my place. you can’t give the same right to anyone else what I have on you. you can’t care for another girl except me. Be ready Virat! I don’t let you go that easily without teaching you the right lesson. you just saw a daughter who loves her Aba a lot but you have no idea what Sai Joshi actually is! )
Virat in mind: ( what a first night! wow! if I knew that first nights are like this I would stay single forever. never dare to get married. such a disaster night! oh God! safe me please)

precap: day one to teach Virat his first lesson.