Hai friends here is a short story based on the music video Ae Mere Dil. It was a music video starring Shaheer and Tejaswi. The music video had a sad ending which many of us felt that it could have been positive..so here is a happy ending wala side of Ae Mere Dil. This story will be posted on  Sundays. Let’s start now

Abishek and Kavya met at the Radio station where they are working as Radio Jockeys. On the very first meet they get attracted towards each other. Kavya has indeed fallen head over heels for Abhishek
Kavya: Abhishek…why don’t we meet for dinner tonight

Abishek: Sure why not

They go home from the office and the scene freezes.

Scene shifts to the Paradise restaurant where Kavya has planned her surprise for Abhishek.
Abhishek and Kavya take their seats and order their choice of food

Sometime later the food arrives and they start to enjoy eating.

Kavya is waiting for her surprise to arrive while Abhishek notices her eagerness. 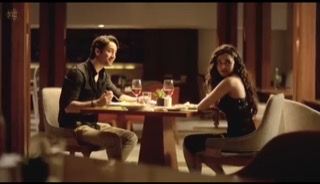 Kavya opens the lid and there is cake and “WILL YOU BE MINE FOREVER “ is written using a choco sauce.

On seeing this Abhishek turns sad.Kavya notices this and

Abhishek: Kavya if you don’t mind I think I must go now.

Abhishek gets up and leaves. His eyes are wet with tears

PRECAP: WHY DOES ABHISHEK HAVE TEARS IN HIS EYES..WHATS BEHIND HIS TEARS.