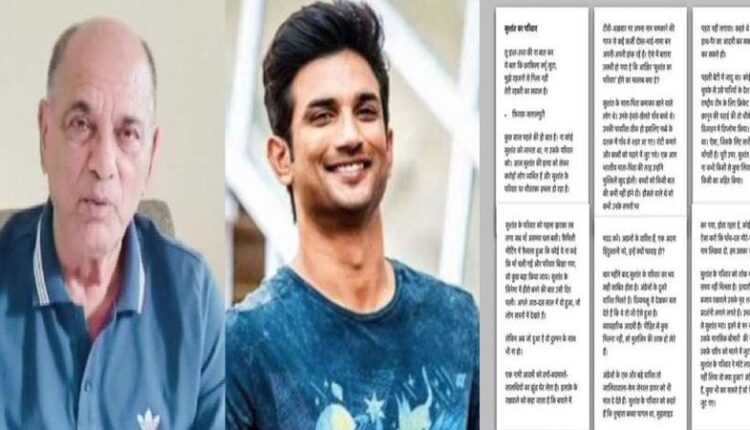 9 Page Letter by Sushant’s family; They believe SSR was murdered

Sushant Singh Rajput’s death has left everyone mourning and not just his friends and family, the entire nation is praying for him to get justice. He left for heavenly adobe on June 14 and was found hanging at his Bandra residence. However, the case can’t be called a suicide as there are too many complex things involved. After the FIR by Sushant’s father, the Enforcement Directorate (ED) and Central Bureau of Investigation (CBI) have begun their probe into the matter. Now, Sushant’s family has now released a 9-page open letter alleging that the actor was murdered.

The letter was released after MP Sanjay Raut talked about Sushant’s father. A report by Times Now stated that the letter has been written in Hindi and talks about how they shifted from a village to a city so that the kids could excel in their lives.

Furthermore, the report also revealed that the letter spoke about the strong bond that the family shares and how the demise of Sushant’s mother affected him and the entire family. The letter addresses the case and raised the question if they will be able to get justice.

Furthermore, the 9-page hard-hitting open letter even talks about the strong bond that the family shares and how the demise of Sushant’s mother affected him and the entire family. The letter also talks about the case and raised the question if they will be able to get justice.

Earlier, KK Singh filed an FIR against Rhea Chakraborty and five other people for the abetment of suicide at Rajiv Nagar Police Thana in Patna.

The report also stated that CBI has recorded the statement of Singh and his family on Monday at the residence of his son-in-law OP Singh, who is the commissioner of Faridabad.

In a shocking turn of events, Sushant’s father, KK Singh and sister alleged that the central investigative agency should look into the case with as the case of a murder and not as an abetment to suicide.

The recent developments in the investigations, media reports, including circumstances where evidence was allegedly ‘destroyed’, the family has now asked that the case be looked into as a murder.

Star Plus’ Shaadi Mubarak gets a Premier date and time slot